The pizza boy; he delivers 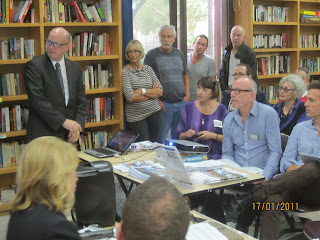 I confronted him at the community meeting on 21 September about the discrepancies in the different consultant's reports in the EIS. He responded that he was not a technical guy and could not answer those kind of questions; his role was to "deliver the project".

Contrast this to the situation in NSW where the O'Farrell government is railroading the state into a system that was not disclosed before the last election, and has not been properly disclosed, even with the exhibition of an EIS. The route through the CBD was chosen on the whim of the Premier without professional analysis and has been showed to be catastrophically flawed.

This situation is comparable to what happened with the Republican Constitution - it did not bloody work, no matter how earnestly fringe politicians wanted it to work. The people were given a vote on the Republican constitution and overwhelmingly rejected it.

The construction of tram rails along George Street will have irreversible consequences for Sydney and the matter needs to be taken to the next election. And this matter will be, no matter what contracts and agreements the O'Farrell government signs.
Posted by Unknown at 18:56