The Airbus A320 that was crashed into the French Alps was 37.6 metres in length, well short of the length of the 67 metre trams that will ply their way along George Street. The maximum weight when fully laden with fuel, cargo and passengers for take off is 78 tonne, less than the 80 tonne mass of the coupled Citadis X05 trams when empty of passengers and drivers. The brochures from Alstom do not give the specifications so the mass is estimated from the specifications for the C2-class trams in Melbourne. The Germanwing A320 was carrying close to its full loading of 150 passengers and crew whereas the George Street trams will have a claimed capacity of 450 passengers.

Following the crash of the Germanwings aircraft the Australian Government has changed the regulations to require two people to be in the cabin at any time and EU airlines will have similar requirements to those for American aircraft. Tram drivers on the other hand are alone in control of the tram, controlling when the doors open, and are not subjected to any psychological screening. However tram drivers will not be the main concern.

Murdoch newspapers have been used to attack individuals such as James Callaghan, Peter Slipper and Kevin Rudd, but they can readily be turned into weapons of mass destruction.

An American company, Vapor Bus International developed edge-sensitive exit doors for buses in 1974, the same year that Intel introduced the 8080 processor. Pressure waves in the hollow rubber sealing tubes detected objects obstructing the closure of the doors and they reopened. Edge-sensitive doors have become mandatory in public transport for buses and trains throughout the world. With the development of microprocessors more sophisticated systems for gap detection have been developed and with vehicles using electric motors for propulsion, such as trains and trams, on-board computers generally prevent the vehicle moving when a door has not closed. Alstom does not disclose the systems to be used in Citadis X05 which has not been delivered anywhere in the world.

A modern tram can be immobilised, with the brakes automatically applied, by superglueing, say, a small block of wood to the frame of one of the exit doors. All a "lone wolf" has to do is effect delays at stops between Circular Quay and Rawson Place with a Murdoch newspaper, a walking stick, umbrella or crutch or a body part, causing the tram to miss traffic lights. Then the coup de grâce is delivered at the Rawson Place stop. On exiting from one of the doors of the rear carriage a small object is superglued to the frame of the door or the floor. By the time the driver has gotten out to investigate why the door will not close the fate of the up to 450 passengers in the tram and the 450 passengers in the following tram is sealed.

By the time it is physically possible for the driver of the following tram to see the stationary tram it is 2.5 seconds from impact. So what would the driver do in his final few seconds of life? Would he sacrifice his life and stomp on the emergency brakes to activate the ATS braking in a futile attempt to mitigate the severity of the injuries inflicted on the passengers? Or would he abandon the controls and try to exit the glass-bubble drivers compartment? The driver's compartment of the Citadis X05 was clearly not designed to protect a driver when coupled carriages collide with coupled carriages of a tram with the brakes applied - the Sydney North Shore is the only place in the world that produces politicians contemptuous enough of human life to run trams of such mass through heavily pedestrianised precincts.

It should be noted that this is not a suicide mission. All the lone wolf has to do is set up a web cam to broadcast the resulting carnage onto the world wide web. Then he can disappear into the crowd. The only purchase he needs to make is a tube of superglue which can not be traced and would not trigger any alerts when purchased. If he wishes to have the publicity he can remain behind and exhort passers by to record the carnage on their mobile phones.

The "lone wolf" attack can take place at any time of the day between 7 am and 7 pm any day of the week - he can choose the time when there are the most passengers on the trams for maximum impact. When the George Street trams are in operation any individual can institute an attack at any time in the future life of the City of Sydney - New South Wales will remain on maximum level security alert for the rest of its history. 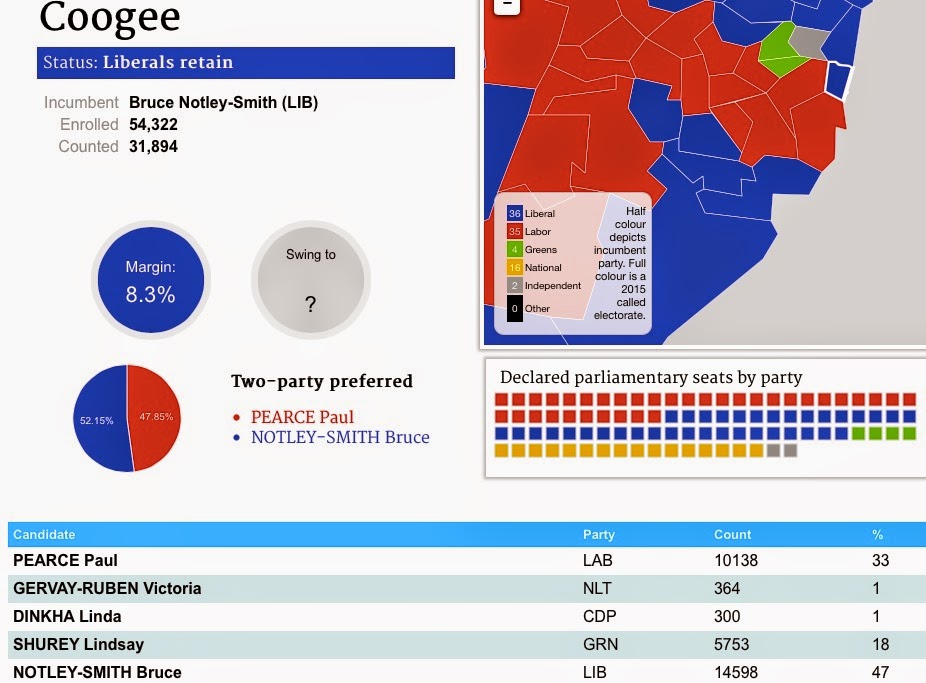 A deluded individual who purchased an illegally sawn-off shotgun was able to stage a siege in Martin Place that effectively shut down the CBD for a day. The election of a Baird state government will ensure that any individual will be able to shut down the Sydney CBD for an indefinite period at any time - the knowledge is out there.

Baird's scripted response to the election result was that voters had decided between fear and hope, but the situation is hopeless - there will never be any respite from the fear of attack from extremists.
Posted by Unknown at 17:03 No comments:

Email ThisBlogThis!Share to TwitterShare to FacebookShare to Pinterest
Labels: Baird, George Street, tram stops
Newer Posts Older Posts Home
Subscribe to: Posts (Atom)
"It is our view light rail down George Street does not work remotely well as a mass transit activity."
Infrastructure NSW was able to make an expert assessment of the proposed light rail route and made that damning assessment.
The modeling disclosed in glossy brochures for the Proposal is infantile and deliberately deceptive.
Alternative routes for light rail were not mathematically modeled and were set up to fail. These were presented to a "Round Table" of "stakeholders" who did not have the qualifications to assess them and were dismissed for spurious and trivial reasons.
We are asking the State Government to set up an Expert Group to properly assess the light rail alternatives for the Sydney CBD before embarking on a project that will have irreversible consequences, and to publish the results.
There is one, at least one, route for light rail (the most obvious route of all) that was not even put up for consideration by the "Round Table" and which ticks all of Nick Greiner's boxes. The Government has been made aware of this route.
This blog will expose the obvious flaws and the devastating consequences of the "Project".
The Blog will place the obvious route for extending light rail in Sydney in the Public Domain and will open up discussion on this and other alternative routes.