The joke of Butt

Clisdell Street has split carriageways with the southbound carriageway at a considerably lower level as you can see in the photos. They reach the same level only at the intersection with Devonshire Street. 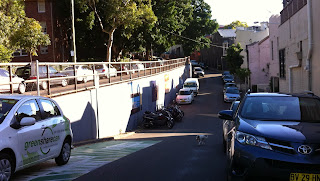 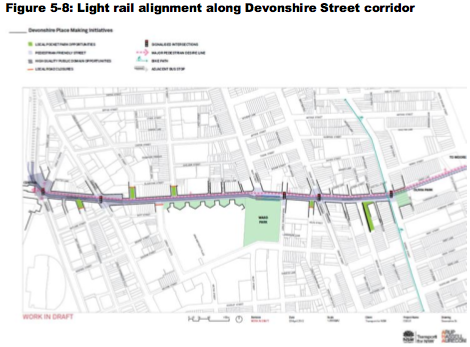 This figure from Booz & Company Technical Paper 1 is impossible to read in the PDF. I had to go to the library to see the printed version and strain my eyes to make out the "Devonshire Place Making Initiatives". The red lines are Local Road Closures and the green areas are "local pocket park opportunities".

As you can see every major road accessing Devonshire Street except Elizabeth, Riley and Crown Streets have been closed. You have to wonder why have an eastbound lane at all? The text from Booz & Company titled Functional Changes says it all:

The blockage of Clisdell Street is south of a wide pedestrian path. Booz and Company state: "Pedestrians will benefit from improved amenity, particularly where streets are closed at their intersection with Devonshire Street as this presents an opportunity to increase footpath width".

You can see from the photos that it will be physically impossible to turn around from the lower carriageway to the upper. Which brings us to Butt Street.

All the roads between Clisdell Street and Elizabeth Street are of course westbound with the exception of Butt Street where the direction is undefined. Butt Street is just a single lane at Elizabeth Street, so narrow the first floor balcony of the five story flats building has been damaged by turning trucks. It is an access lane to the off-street parking of the buildings fronting Elizabeth Street and Devonshire Street. TfNSW will be redefining it as the escape route from Clisdell Street. The southbound carriageway of Clisdell Street will be just waste space.
This will spell the death nell of the Belvoir Street theatre, across the southern end of Clisdell Street. The only vehicular access will be from Crown Street into Lansdowne Street - the only entry to the ghetto.

The other consultants refer lyrically to the Surry Hills stop as primarily servicing the local residential, dining and entertainment area, but few businesses will survive the tramway. It is a lot quicker to walk to these venues from the Devonshire Street tunnel exits of the Central rail platforms and from Elizabeth Street bus stops than from the proposed tram stop.

O'Farrell's only concern is with maximizing the profits of the private cattle car company, but he is killing the goose that lays the golden eggs.
Posted by Unknown at 13:31