We are not amused

The bus stop in front of the Town Hall is a set-down-only stop for bus services from Victoria Road that continue to Railway Square along Harris Street. The buses then turn into Druitt Street and circle back to George Street via Clarence and King Streets before picking up passengers for the return journey. There is no possibility for buses to lay-over in Clarence or York Streets so the buses return immediately. Most of the buses from Victoria Road turn into George Street from Druitt Street and proceed to Circular Quay where there is space for them to lay-over and physically turn around. A bus stop in the single eastbound lane in Druitt Street would block the flow of traffic so for decades bus stops have been in front of the Queen Victoria Building (QVB).

There are no bus stops in front of Town Hall for the Inner West bus services because buses would be trapped at the stop by buses and other vehicles turning into Druitt Street to reach Clarence Street. Once again the bus stops are in front of QVB. Passengers alighting here percolate through or around the QVB to reach York Street.
The actual location of the Town Hall stop is Cabinet in Confidence but it will extend to the southern wall of the Town Hall. The QVB stop is only two tram lengths away! 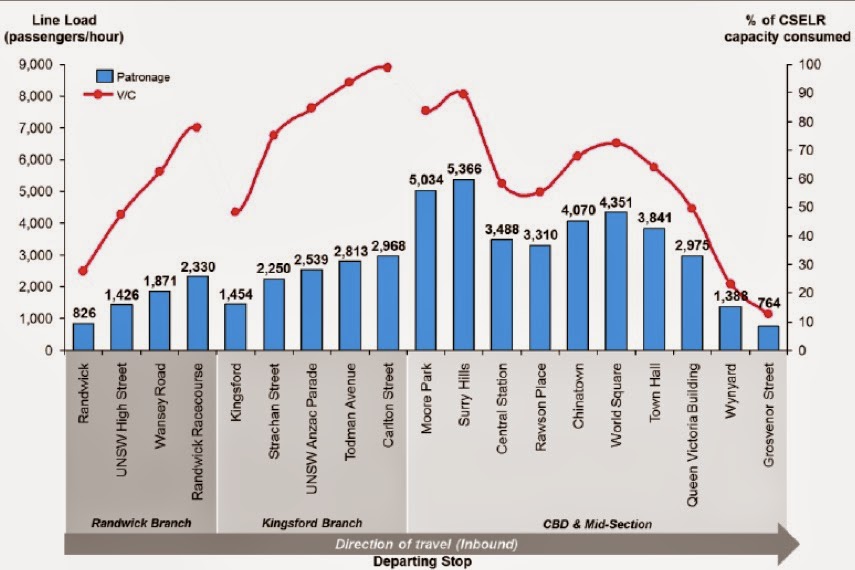 TfNSW published a figure in the EIS showing the occupancy of the trams during the am peak hour. They revised the figures for passengers transferring onto and off trams during this hour for the never-exhibited EIS but incredibly the figures in the "revised" bar graph were exactly the same - they believe they can predict passenger numbers with unbelievable accuracy. The only difference between the figure in the EIS (left) and in the amended EIS was that the the line graph of "% of CSELR capacity utilised" had been obliterated. 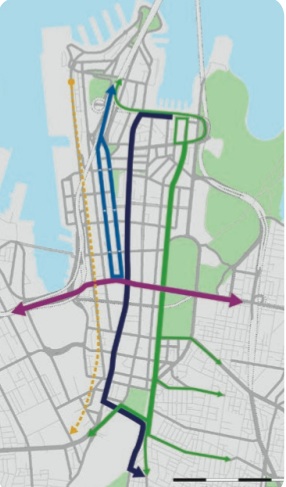 TfNSW appointed Interfleet as "operations advisor" in 2013 to prepare an "Initial Light Rail Operations Services Plan" which was referenced in the EIS. This was after the release of the December 2012 brochure which showed the "Future bus network" diagram left. Currently buses from the North Shore, Northern Beaches and the north west Hills suburbs physically turn around at Wynyard Park, Druitt Street and the Lee Street layover ("Railway Square"). The plan was for buses that discharge passengers in York Street at the QVB to come exclusively from past Wynyard Park. The tram stop at the QVB only takes passengers back from whence they came.

Interfleet produced figures for passengers they expected to transfer from buses and trains at the various stops and these were used to generate the occupancy figures in the bar graph above. There is no evidence that TfNSW has ever commissioned competent consultants or employees to assess the headways that would be required for the operation of trams in  George Street.

Interfleet estimated that 450, 300 and 350 passengers would board the inbound trams at the World Square, Town Hall and QVB stops, a total of 1100 passengers. These must come from New South Head Road bus services prevented from turning from Park Street into Elizabeth Street and forced to terminate, God knows how, at Walsh Bay, or from Victoria Road bus services forced to pass through to William Street and terminate, God knows where, in the Eastern Suburbs. The EIS subsequently asserted that an unknown proportion of Victoria Road bus services would terminate at Wynyard Park, discharging passengers in Clarence Street, so these figures are meaningless. The never-exhibited EIS "corrected" massive mistakes in the figures for passenger transfers but the figures for net transfers at the QVB stop remained the same.

Now the World Square stop is eliminated and the Town Hall stop is closer to Park Street than the QVB stop. No bus passenger in their right mind would board the trams at the QVB stop. A large number of tram passengers from the south eastern suburbs will indeed be forced to disembark from the trams at QVB as it is the only stop between Town Hall and Wynyard but there is no earthly reason for them to be forced to walk as far to reach destinations around Martin Place.

If the combined numbers of passengers boarding the trams at the then three proposed stops around Town Hall are subtracted from the figure for the line load of passengers still on board after QVB stop during the peak hour, 2975, you get an idea of the extent to which trams are running on empty through the pedestrianised zone. TfNSW claims the trams will have a capacity of 466 mainly-standing passengers and will operate at a frequency of 15 per hour from 7 am to 7 pm. TfNSW also assumes that "in the 2021 AM peak hour, over 2,000 passengers are forecast to transfer from buses to light rail at the Kingsford terminus and over 1,600 passengers at the Belmore Road terminus". Interfleet forecast that 1,978 passengers would alight at Chalmers Street, 55% of the passengers that transferred at the terminuses.

After the QVB stop the trams will be carrying only 125 passengers each during the am peak hour unless Park Street / Druitt Street bus services are prevented from accessing the northern CBD. This will become markedly less during the rest of the day as bus passengers refuse to give up their seats and wait at least 8 minutes for a tram. So will trams running on empty be given priority at intersections at Market, King and Hunter Street?

For this to happen, voters in New South Wales would have to elect depraved and vicious politicians for the next 1000 years. The last politician to make such an assumption was Aldolf Hitler and he went on to cancel elections.

Realistically, the only place where trams would override the SCATS system in the CBD is between the Chinatown stop and Rawson Place stop. When this is factored in the claimed frequency that trams can be dispatched from Circular Quay of every 4 minutes is delusional.

Peter Egan from Artarmon took the figures for line loads in the EIS seriously and accessed the Interfleet Plan. His submission to the EIS analysing the flaws in the capacity calculations was dismissed without explanation by Pru Goward's department but has proven to be chillingly correct. His submission can be read here.

The Independant Review by SAMSA Consulting, released with the Assessment Report also queried the capacity figures:

The TfNSW response was incomprehensible, referring to "through routing across the CBD and nearside termination at Central Station". "Detailed demand and operational modelling has confirmed that the capacity of the CSELR is appropriate".

TfNSW Response: Operational modelling for light rail has been prepared in consultation with RMS and the Transport Management Centre (TMC) and incorporates signal delays. The modelling is considered conservative in terms of the level of priority that the service would receive. Optimisation of light rail / traffic coordination is ongoing.

TfNSW was hugely dismissive of SAMSA's concerns. The only independent reviewer of the assessment report was not given access to any of the data used to project service frequencies and headways or any of the assumptions used in projections of future traffic flows. SAMSA was not allowed to make any assessment of the calculations and was simply told to not query the assertions of TfNSW, RMS and TMC, departments set up by North Shore politicians and staffed by burnt-out appointees of the construction industries who are devoid of any ethical conscience.
TfNSW Response: The project will remove 3,500 trips from the road network during the morning peak and 4,000 trips during the afternoon peak period. This is equivalent to a 15% reduction in future growth in traffic volumes

This assertion from TfNSW was one of the assumptions used to calculate delays at signalised intersections which would have been used to calculate service frequencies. It would be laughable except for the catastrophic consequences that will ensue if ALTRAC has contracted to maintain service frequencies that result inevitably in collisions at Rawson Place and Chalmers Street.

SAMSA Consulting was not given any resources to assess the claimed service frequencies. They were merely given a copy of the fraudulent EIS and allowed to pass scathing comments. They were obviously correct to express concerns about the infantile "demand and operational modelling" that TfNSW claimed to have carried out. Now that Ms Berejiklian has had to increase the claimed capacity of the trams from 300 to 466 in order to increase the headways to a claimed 4 minutes the assurances given to the assessors about the competence of their modelling cannot be accepted.

Only a judicial inquiry into the contracts signed by Ms Berejiklian in the dead of night before any professional assessment could be made of the latest claims by two departments set up by North Shore politicians, TfNSW and RMS, can ascertain whether the project can ever meet acceptable requirements for public safety and the future public transport needs of the Sydney CBD.

An entreaty to the Leader of the Opposition

I wrote to the Leader of the Opposition a couple of weeks ago urging the ALP to make an inquiry into "availability PPPs" in issue in the election. I received a do-not-reply acknowledgement that the letter had been received. We will have to wait to see if the letter has any influence on the election strategies adopted. We live in hope.

I have decided to place the letter in the public domain. You can view it here.

Email ThisBlogThis!Share to TwitterShare to FacebookShare to Pinterest
Newer Posts Older Posts Home
Subscribe to: Posts (Atom)
"It is our view light rail down George Street does not work remotely well as a mass transit activity."
Infrastructure NSW was able to make an expert assessment of the proposed light rail route and made that damning assessment.
The modeling disclosed in glossy brochures for the Proposal is infantile and deliberately deceptive.
Alternative routes for light rail were not mathematically modeled and were set up to fail. These were presented to a "Round Table" of "stakeholders" who did not have the qualifications to assess them and were dismissed for spurious and trivial reasons.
We are asking the State Government to set up an Expert Group to properly assess the light rail alternatives for the Sydney CBD before embarking on a project that will have irreversible consequences, and to publish the results.
There is one, at least one, route for light rail (the most obvious route of all) that was not even put up for consideration by the "Round Table" and which ticks all of Nick Greiner's boxes. The Government has been made aware of this route.
This blog will expose the obvious flaws and the devastating consequences of the "Project".
The Blog will place the obvious route for extending light rail in Sydney in the Public Domain and will open up discussion on this and other alternative routes.