There is no right-hand turn from Anzac Parade into Alison Road, understandably. To turn right drivers must think ahead or use navsat, and turn into Ascot Street then make the right turn from Doncaster Avenue. Ascot Street also gives access to the car park of Randwick Racecourse - to be obliterated. There is no right-hand turn from the northbound lanes of Anzac Parade into Todman Avenue so this traffic does not circle past the Kensington Primary School.

O'Farrell may be full of shit but he does not give a shit what happens to primary school students. He demonstrated this at Ward Park and Bourke Street Primary so at least he is consistent. The right-hand turn into Ascot Street is to be obliterated and a (presumably) hook turn introduced at Todman Avenue.
This information is provided in the Technical Paper 1 written by consultants Booz & Company. The text announces bluntly:
Right turn movements that provide access to Doncaster Avenue will be consolidated into a single right turn at Todman Avenue, as illustrated in Figure 5-13.

This was the first that residents of Kensington got to know of this. The EIS legislation requires that an EIS be exhibited for a minimum of 30 days and up to 90 days. The Minister is exhibiting this 3,000 word plus EIS for 32 days.

The wicked witch of the north has sprung another of her nasty surprises. This time it is the residents of Kensington that are her victims.

It gets worse, much worse. One has to deal with the usual deliberate deception that is systemic with this EIS.

The earlier diagrams of the Project from the 13 December 2012 brochure onwards showed the dot representing the "Todman Avenue stop" well to the south of Todman Avenue, which was consistent with the infantile modelling that required the dots to be roughly evenly spaced.

Now the other consultants, Parsons Brickerhoff, have produced the Figure 5.38 showing the stop to be to the north of Todman Avenue. There was of course no consultation with the local community or businesses about the move.

The "indicative plan" of the stop shows a bus icon (the light blue rectangle) on the westbound carriage-way of Todman Avenue. It could only have got there from Doncaster Avenue and it could not have reached here because the only right-hand turn is at Todman Avenue. This is deliberate deception designed to conceal the intentions of TfNSW.

The lanes at the intersection just reflect the existing situation and there are no arrows on the lanes. TfNSW is intent on concealing the intention to introduce hook turn lanes as they have at every intersection in the system. The usual method to do this is by cropping but this is not possible here so we have plan B - remove all lane markings.
Getting back to TfNSW's Boozy consultants. The Table 4-1 details the fate of bus services when commuters are forced from the public bus services onto the privately operated cattle cars.

You have probably spotted the obvious flaw in this scenario: It is physically impossible for buses to terminate at Todman Avenue. The only right-hand turn is into Todman Avenue and buses cannot do a U-turn in Todman Avenue. The Liberal Party curse has struck again - they can not comprehend that buses need space to turn around.

It should be noted that this table appears in the same volume of the Technical Papers as the disclosure of the right turns that will be permitted from Anzac Parade. This is not a case of different consultants coming up with contradictory plans. 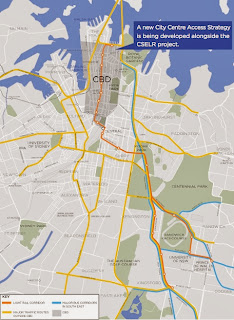 So what are the residents and businesses of Kensington to make of all this? There is utterly no disclosure of what is meant by "terminate".

It probably means dump all passengers and proceed via the Eastern Distributor to Circular Quay, the only place where the buses can physically turn around. This was the qualified planning released before the exhibition of the EIS, reproduced (left) again from a previous post.

The citizens of Kensington had 32 days to find out.
Posted by Unknown at 21:25