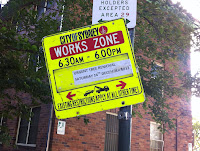 Clover Moore emphatically told the Community Forum at the Sydney High School on 15th April that the cottonwood poplars in Devonshire Street would be preserved. The Minister and Chris Lock had microphones and did not demur. The iconic trees were planted in the 1950s and are heritage listed with the City of Sydney.

The work is scheduled to begin tomorrow and is declared to be Urgent Tree Removal. Saturday was to be two days before submissions on the EIS had to be mailed. But the exhibition period has been extended to 30 December. The need for urgency has been removed.