Years ago when Clover Moore was with South Sydney Council she mounted a typically strident campaign to have overhead electricity wires removed from the streets. My own terrace was listed as being built in the first Sydney Street Directory in 1857. Gas lighting then electric lights were retrofitted over the years. The electric wiring travels through the first floor to the rear wall then down to the ground floor. Underground wiring would be prohibitively expensive to install for the authorities and for residents.

Clover Moore has never let such considerations worry her. The State Government spent a lot money and did the sums and told her to get stuffed. She has a whole new relationship with the O'Farrell Government.

When the Minister for Transport told the Community Forum in April that the Liberal Party State Government would take responsibility for the Project Clover Moore's eyes widened and she said nothing. The "community independents" who comprise about half of the City of Sydney councillors have maintained that the route through Surry Hills and the CBD was the choice of the State Government and have not expressed any concern about the consequences to the people who elected them. The only concern expressed by Clover Moore has been about overhead wiring in George Street.

The EIS specifically argues against battery operated trams and the indicative sections of the stops show the catenary wires. However the tech guy at the"information session" told me the trams would put up their pantographs at stops and charge their batteries with sufficient power to travel to the next stop. This is the same guy who told me the trams could stop in the same distance or better than rubber tyre vehicles.

The stop outside the Anglican Cathedral is at the start of the pedestrianised zone and the adjacent stop at Market Street, the "Queen Victoria Building" stop, is the only stop between it and the Wynyard stop, which is just before the tenuous Hunter Street connection with the CBD west of George Street that marks the end of the pedestrianised zone. The QVB stop would be the only stop where this phenomenon would be taking place. O'Farrell is apparently prepared to go to any expense to gratify Clover Moore's obsessions.

Battery operation limits the ability of trams to use regenerative braking where trams are most likely to run down pedestrians. This will be another matter for the PPPPs (Potential Private Public Partners) to decide. 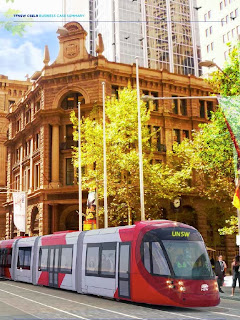 The infamous artist's impression of the trams passing Martin Place which appeared on the cover of the 13 December 2012 brochure showed the catenary wires and the pantographs. When a cropped version appeared in the Business Case Summary in November these had mysteriously been removed. This would reflect the intelligence level of the investors the State Government must attract.