A tale of two ghettos 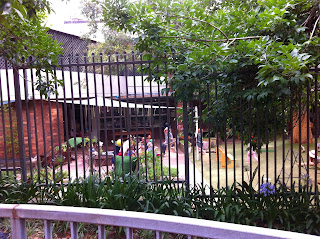 The SDN Children's Services is a not-for-profit organisation committed to providing high quality education and care for children 0-5 years of age, strengthening families, local communities and the children's services sector - to quote from their response to the discussion paper Statutory Child Protection in NSW. They have 22 centres in NSW, and the centre next to the Cooper Street Reserve has been established for yonks.

There is a high fence along the boundary with the Reserve to protect the children from adult predators. But nothing could protect them from the nastiest predator of them all, Barry O'Farrell, a serial stalker of preschools, primary schools and child minding centres. 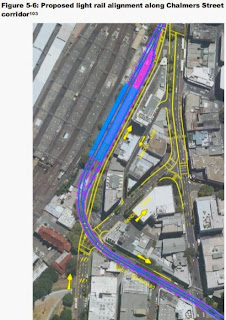 The diagram left from Technical Paper 1 by Booz & Company is just one of the multiple choices for the intersection that TfNSW is asking to be approved. The yellow lines are presumably kerbs. I have no idea what the mauve dotted lines represent.

There is a large kerb blister on the corner occupied by the Madison Hotel. It is impossible to tell if it will be possible to turn from Chalmers Street into the single lane that is Devonshire Street or if traffic will be forced to use the right turn lane round the Telstra building feeding traffic into the western lane of Elizabeth Street. Either way traffic from the south will not be able to access Kippax or Cooper Street which have traditionally been the locale for the rag trade in NSW and for News Corp. There are now many more businesses in this area, in the advertising and media fields in particular.

Trucks and other vehicles needing access to this area will now have to turn into the single lane that Devonshire Street has been reduced to, and proceed east to Riley Street. The Cooper Street Reserve will be destroyed to allow rag-trade trucks and other vehicles to back track down Cooper Street. This is bizarre even by the standards of TfNSW.  Booz & Company proclaim this disingenuously: "To mitigate the impacts to local access the following changes are proposed to improve accessibility whilst maintaining the benefits to light rail operation:

In order to reach Riley Street, trucks and other vehicles have to pass Holt Street, the address of News Limited, and Waterloo Street which are wide streets that have been blocked off and would give direct access to Cooper and Kippax Streets. The reason they have been closed is to avoid trucks possibly "encroaching on the alignment of the light rail" when turning. The only concern of the O'Farrell government is avoiding any restriction on the speed at which cattle cars will be travelling when passing through Surry Hills.

A road connection through Cooper Street Reserve will be steep and difficult for trucks, as you can see from the photos, and it will not only be the only entry to this area of Surry Hills, between Devonshire Street and Foveaux Street, for traffic from the south - from Cleveland Street to Geelong - it will be the only entry for traffic from the Eastern Suburbs. They will need to make a right-hand turn from Riley Street.

O'Farrell is ghettoizing this section of Surry Hills as callously as he is ghettoizing the public housing sector. If the kids on early intervention programs at SDN have not been traumatised, they will be.