Jonathan Burrows exploited a loophole in the Oyster Card system over a five year period. He commuted from a station without barriers in East Sussex to a tube station in the City of London, a journey that should have cost £21.50 each way. By not using a ticket when he entered the rural station and when he transferred to the tube line he was only charged the maximum for the shorter distance of the tube line when he exited through the ticket barriers at Cannon Street station in the City, £7.20. British rail estimated the fares he had evaded amounted to £42,550 which he paid within a couple of days hoping to avoid publicity. To no avail. He was taken to court and his name was released to the British tabloids. He was sacked from his job at the UK branch of Blackrock and the Financial Conduct Authority banned him from working in financial services for life.

These were astonishing consequences, particularly when you compare the FCA with APRA.

A commuter is in fact highly unlikely to be picked up for fare evasion when travelling between train stations that do not have ticket barriers, in peak hours. If a commuter exits at a station that has barriers it will be picked up that he did not tap on and most commuters have destinations with ticket barriers.

It is unclear if he tapped on/off when he transferred to the tube train. He could have made the transfer at a station that allows transfers to be made by switching platforms without going near a ticket barrier, such as Strathfield or Central in the Sydney network. When he did not tap on or use a paper ticket at the station in east Sussex the Oyster system had no idea where the journey had commenced and would have charged him the maximum fare for the tube route. The fault was with Oyster system - Burrows merely took advantage of the flaw. If he had not admitted everything by paying the estimate for the evaded fares he could have only been fined for evading the one fare when he was picked up on the platform of the station in east Sussex following a tip off - a small fine that increases after three offences. They knew where he lived and where he worked but Scotty could have been beaming him up to London.

The Opal system has the same flaw. A passenger who has not tapped on can transfer from a Newcastle train or a Blue Mountains train to, say, an inner-west City Circle line at Strathfield or Central and tap off anywhere in the City Circle and be charged only the maximum for that route. Ms Berejiklian challenged commuters to try to take advantage of the system! Illawarra line passengers can transfer to inner-west trains at Redfern station. 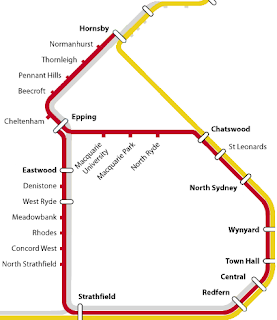 The Western Line has relief rail lines that make it physically possible to trap fare evaders. Trains from outer Sydney skip long swathes of stations in inner Sydney. Ticket inspectors (are they still called that) have time to go through the carriages asking passengers to show a validated paper ticket or tap a card on on a hand-held reader. Any passenger bailing out prematurely can be asked to do the same by backup inspectors on the platforms.

This is not possible with the trams. The doors open at every stop and once a passenger with an untapped card steps off the tram he is home free. Passengers in the other carriage will have a view of an inspector working through a carriage through the face to face unoccupied drivers cabins.


This is not a problem with the Myki Card:

The impossible situation that Opal Card inspectors will have to confront has been laid out in a secret risk assessment report from Arup who were consultants on Visual and Landscape assessment in the original EIS. The risk assessment focused on the number of intersections to be encountered by vehicles crossing the tram lines and the speeds at which the coupled trams will be presumed to be travelling. This unreleased report is the first time information on the presumed speeds of trams through intersections has been provided to consultants. SAMSA, the "independent" consultants for the Peer Review of Traffic & Transport Assessment commissioned by Planning and Infrastructure, were fobbed off with the assertion that the presumptions of which intersections would be given priority for trams were "conservative". Now Arup, hardly independent consultants, have been told that trams will pass through 23 intersections at "high speed" (up to 70 km/h), 17 intersections at "medium speed" (up to 40 km/h) and six intersections at low speed (less than 25 km/h). The intersections are not identified in the report. The assertions of high speeds through intersections are preposterous as tram stops are perforce situated adjacent to intersections and trams must slow down to stop without throwing passengers around.

Arup does not question the assertions of Transport for NSW and concludes "The risk profile for CSELR equates to 1.14 fatalities per year". Arup did not consider any of the matters brought up by myself and others in Submissions to the EISs. They did not consider the blindsiding of pedestrians at every crossing to and from Central Station, the attempted diversion of pedestrian routes at Riley Street, the impossibility for buses to make turns without encroaching on the tram alignments, the proximity to pedestrian areas and the other matters. Arup are plucking figures from thin air in line with the other consultants for the project. There is no tram system anywhere in the world remotely comparable to the George Street trams. The fatalities expected from collisions at intersections alone are many times higher that those experienced by the current public transport system.

The proclaimed speeds between stops leave very little time for ticket inspectors to operate. Once an inspector has been identified passengers who have not tapped on can exit at the next stop when all the doors open. If smart devices are ever permitted to be used to tap on/off in NSW, passengers will be able to take mug shots of ticket inspectors and upload them to apps that track inspectors and issue warnings to fare evaders in following carriages.

This will be of little concern to ALTRAC since the "availability PPP" guarantees the consortium profitability regardless of how much it collects in fares.
Posted by Unknown at 00:41 No comments:

Email ThisBlogThis!Share to TwitterShare to FacebookShare to Pinterest
Labels: Baird, EIS, Oyster Card, tram stops, Transport for NSW
Newer Posts Older Posts Home
Subscribe to: Posts (Atom)
"It is our view light rail down George Street does not work remotely well as a mass transit activity."
Infrastructure NSW was able to make an expert assessment of the proposed light rail route and made that damning assessment.
The modeling disclosed in glossy brochures for the Proposal is infantile and deliberately deceptive.
Alternative routes for light rail were not mathematically modeled and were set up to fail. These were presented to a "Round Table" of "stakeholders" who did not have the qualifications to assess them and were dismissed for spurious and trivial reasons.
We are asking the State Government to set up an Expert Group to properly assess the light rail alternatives for the Sydney CBD before embarking on a project that will have irreversible consequences, and to publish the results.
There is one, at least one, route for light rail (the most obvious route of all) that was not even put up for consideration by the "Round Table" and which ticks all of Nick Greiner's boxes. The Government has been made aware of this route.
This blog will expose the obvious flaws and the devastating consequences of the "Project".
The Blog will place the obvious route for extending light rail in Sydney in the Public Domain and will open up discussion on this and other alternative routes.