By George, I think she's got it 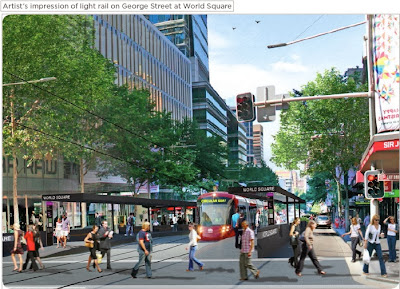 The 13 Dec 2012 brochure showed an artist's impression of the World Square stop showing it to be adjacent to the World Square complex, with separate platforms on both sides of the rails. In the EIS the stop has been moved north of Liverpool Street, without a word of explanation and without forewarning.

Since the northbound lanes in George Street between Liverpool and Bathurst Streets were narrowed to two with the notorious improvements which accompanied the Railway Square improvements, there will now be an island platform with barriers allowing access for passengers at only the lights controlled pedestrian crossings at Liverpool Street and north of Central Street. The width of the platform from the northern crossing appears to be very narrow and the text of the EIS refers to the stop as servicing the Event Cinemas. Indeed, the privately-operated tram company will have the exclusive rights to provide this service.

This stop is now so close to the "Town Hall" stop it takes less than two minutes to walk between the stops. So now people in George Street will have a choice: walk using the crossing or underpass at Bathurst Street; or, walk to the lights controlled crossing north of Central Street, backtrack to the part of the platform where the trams stop, wait three minutes for a tram, pay a section fare then stand.

The three stops, World Square, Town Hall and Queen Victoria Building, are so close together they are practically the same stop. Yet not one of them gives efficient access to the bus services from the Harbour Bridge that will be forced to terminate by making a right-hand turn in Druitt Street.

For centuries George Street public transport has been the main means for moving across town with services turning up all the time. The privately-operated trams will not provide such a service and will obliterate all competition. There will be only one stop between the Town Hall Station stops and Bridge Street - at Wynyard Station.

TfNSW has acknowledged that the trams cannot compete with the express bus services to Bent Street so the stops in George Street are cherry-picked to be only at the most profitable locations. These are  essentially the Rail Stations.