Lies, deception and subversion of public servants at Circular Quay

The Independent Commission Against Corruption is currently investigating the awarding of leases for restaurants at Circular Quay without going to tender. This may have resulted in taxpayers missing out on rent collections worth a few tens of thousands of dollars a year, although it is claimed the restaurants are now operating at a loss. A few metres to the south however, a project has unfurled that will cost taxpayers and/or public transport users billions of dollars and will have irretrievable consequences for the City of Sydney. Senior Public Servants have used systemic deceit to promote this project.

The Deputy Director General at Transport for NSW, Chris Lock told the Randwick Business breakfast in April that "we have run out of real estate" - kerb space for bus stops. This is patently untrue. Less than half the kerb space in Alfred Street is currently used to turn buses around. The limited lane space in George Street between Martin Place and Margaret Street is what limits the numbers of buses that can use Alfred Street to turn around. Congestion in this part of George Street is not a result of vast hordes of commuters trying to reach Circular Quay by bus - the buses are largely empty by this stage - it is the direct result of the failure of the O'Farrell government to properly schedule bus services from Broadway. O'Farrell is using this failure to demand carte blanch to obliterate most of the places in the CBD and its immediate surounds where it is physically possible for buses to turn around and maintain scheduled departures.

The 9/11 2013 brochure Sydney City Access Strategy contained a map showing the numbers of passengers currently entering the city centre 8:00 AM to 9:00 AM. The number of arrivals by ferry at Circular Quay was 4000. Most of these would be from Manly and since Manly and the bus routes that feed into it have no proximity to a rail station, most would seek to board a train service. 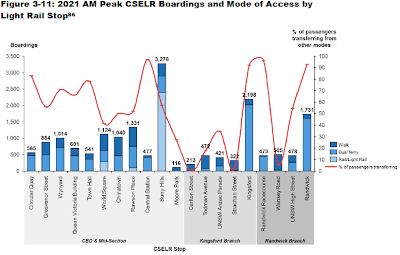 The EIS confirms this observation. The figure above is an extract from the Sydney Light Rail Round 5.2 Demand Report, 2013 which I have not been able to access. Even on the absurdly optimistic assumptions of Booz & Company less than 500 commuters are projected to transfer from ferries to the trams during the AM peak. This figure would get less in future if a competent post-O'Farrell government established a ferry terminal at Barrangaroo.

Clearly Sydney needs a tram system that (chant) "can deliver up to 19,000 people in each direction" to Circular Quay, like a hole in the head. The big problem for the less than 500 people per hour silly enough to try to catch the trams will be working out which of the three platforms the next tram will be arriving at. Crossing the tracks between the platforms to catch a departing tram could prove fatal. 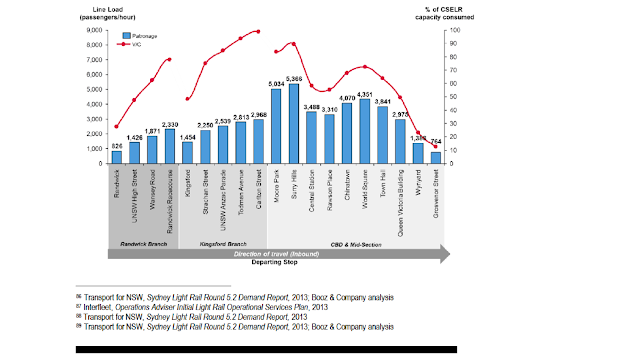 The figure above is from the same page of the Technical Papers EIS as the first figure. These are the only extracts from the undisclosed 5.2 Demand Report. They confirm that the trams will be running on empty when they pass the trio Town Hall Station stops.

The Results of Gonski's Test - FAIL

Booz & Company explain in the Technical Papers that when the O'Farrell government decided to press ahead with the Project regardless of any criticism, "TfNSW commissioned the development of a demand model specific to the requirements and intricacies of the CSELR project". This model - the Public Transport Project Model (PTPM) - is referenced at various points of the EIS but it has never been subjected to critical analysis. Basically, it allows Booz & Company to make any assumptions it wants.

One of the most bizarre of its assumptions is that the Surry Hills stop will be the most heavily used stop in the system, as you can see from the first figure. Most of the passengers boarding the trams at this stop will be students and staff from the University of NSW who, it is assumed, will exit Central Station via the Devonshire Street tunnel, cross the tram lines and traipse along the northern footpaths of Devonshire Street in sun, rain and sleet to Riley Street, where they will cross the road at the signal-controlled crossings to board the trams. Booz & Company have plotted every step that they will make.

Currently there are express bus services between UNSW and Central Station and Railway Square that travel along established route along Cleveland and Chalmers Streets and deposit students and staff at the entrance to the Devonshire Street tunnel and pick up passengers in Elizabeth Street. I have pointed out in previous posts that there is a much faster route using the bus roads in Moore Park and the under-utilised priority bus lanes in Foveaux Street.

The University of NSW is cited in all the brochures put out by TfNSW as one of the "stake holders" in the project. It must have come as a shock to students of UNSW to realise that they are to be treated by O'Farrell as the second-class citizens they undoubtedly are. We will see after 30 December  if the university or student bodies raised any objections.

The Kingsford tram line was developed by Randwick Council and UNSW to supplement the bus services to Central Station. It was O'Farrell, on a whim, who linked these plans to the City of Sydney's lunatic desire to pedestrianise George Street. It was TfNSW that insisted that the trams must run on their own exclusive lanes with priority signalling in a futile effort to compete with express bus services.

It is inconceivable that any one would use the trams if the buses were able to compete. At the community meeting on 21 November, the pizza boy, Jeff Goodling, was saying that that there was commercially privileged information that was being made available to PPPs. I put it to him that they must be being told which bus services will be terminated. He responded, speaking slowly, that the PPPs were not receiving any information on what bus services would be terminated.

Will the next State Government need to refer this project to the ICAC or set up a Royal Commission to find out what is actually taking place in the Minister's negotiations?
Posted by Unknown at 07:54