The beginning of the end for Broadway bus services

The EIS contained deliberately contradictory figures for the Rawson Place tram stop. Parsons Brinckerhoff showed southbound buses in Pitt Street going straight ahead across Eddy Avenue. Booz & Company showed the buses turning right into a setdown-only lane in Rawson Place then creating a pincer movement for passengers set down from buses or trams at the George Street pedestrian crossing: 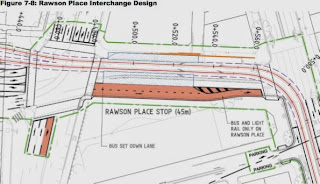 The Booz & Company figure was extracted from the worksite diagrams which were inadvertently released by the City Council after the close of the exhibition period providing confirmation. This was discussed in a previous post on June 13 Triple cripple. Now the government has confirmed the route to be taken by buses terminated in Pitt Street in order to physically turn round and will start work constructing and demolishing bus stops on 3rd December 2014 with work to take four weeks. The work is being funded by Roads and Maritime Services as is the pedestrian overpass in Moore Park.

The bus stop at Belmore Park that I have used to catch a bus to Newtown since moving to Surry Hills in 1986 is to be obliterated, without explanation. It has been savagely crossed out with a red cross. I will have to walk further to the existing stop CS29 in Pitt Street. I am assured by Parsons Brinckerhoff Volume 9.3.4 in the EIS for the CSELR that this is in the interests of my health: "Research also indicates that people would walk longer distances to catch light rail than to catch a bus". The Business Case puts a figure on the resulting expected benefits to public health of $308 million. I kid you not.

The EIS does not reference who did the research or what it cost the taxpayer but since the tram stops are at a much greater distance apart no one would dispute the research. But the Baird government will be shutting down bus stops so public bus services will not be competing effectively with trams if elected on March 28. The bus routes specifically singled out for decimation of bus stops after the election do not actually compete with the trams. These are the Bondi bus services along Oxford Street and the bus services from the rail/bus interchange in West Ryde to Parramatta and to Sydney Town Hall along Victoria Road.

The healthy way to travel
After the well-attended community meeting at Randwick Boys High Andrew Roydhouse organised audience members into the aisle to demonstrate how passengers will be forced to travel in a segment of the trams for them to meet the claimed capacities - packed like sardines.

The Son taketh away, The Son giveth
While the bus stop I have been using is being exterminated a new bus stop CS32 is being created across the road on the northern side of Hay Street at the expense of parking spaces. The problem is: Son of Bruce Almighty only knows from where the buses would be coming. There is however only one place where they could be headed: Elizabeth Street northbound.

The mother of all pinch points

Another bus stop savagely crossed out is the set-down-only stop outside David Jones. Buses from Oxford Street and south and southeast Sydney avoid the stop HP2 in Elizabeth Street just north of Park Street like the plaque with good reason. Buses, from local inner city routes turning from Park street, that use the stop get trapped by taxis turning left into Market Street. The drivers have to wait for a bus in the second lane, which is the de facto bus lane, to take pity on them and let them out. I observed and photographed the situation in the morning peak more than a year ago - the post 10 September 2013 How do you solve a problem like Elizabeth?

Now TfNSW will force buses to use a new stop even closer to Market Street. Baird is not only trapping buses from Botany Road and Bunnerong Road in the bus stop south of Foveaux Street he is trapping them south of Market Street.

Elisabeth Street northbound narrows to two lanes north of David Jones - the mother of all pinch points (at the top of the figure). Traffic in the central general-vehicle lane, which the EIS acknowledges will be increased drastically by the George Street trams, will have to cross the privileged bus lane in the midst of the pinch point in order to legally proceed north. The mind boggles at the congestion that will eventuate in all but the wee hours of the morning. The public servants put in control at TfNSW have never had any input from anyone who has driven a bus and would not be seen dead on a bus.

"Up to 220 buses"
The EIS for the redesign of bus stops in the CBD reiterated the original chant of removing 220 buses from the CBD which has been totally discredited and was withdrawn in the TfNSW response to the Independent Review of Traffic & Transport Assessment released with the Secretary's Assessment Report in June. The public servants at TfNSW are devoid of any sense of shame.

Elizabeth Street is by far the most congested bus route in the CBD. This was collaborated by the figures for delays in bus schedules during the AM peak period given in the EIS. The 13 December 2012 brochure chirped:
Booz & Company asserted in the EIS for CSELR 4.2.1:

This is a bottom-of-the-beer-coaster figure and is not backed up by any analysis. The proposition that bus services displaced from George Street could be diverted into Elizabeth Street northbound assumed that changes to the lane colourings and stop locations in Elizabeth Street by the self proclaimed geniuses at TfNSW would accomplish dramatic increases in traffic flows. This has now been exposed as delusional: traffic flows in bus lanes will be drastically degraded.