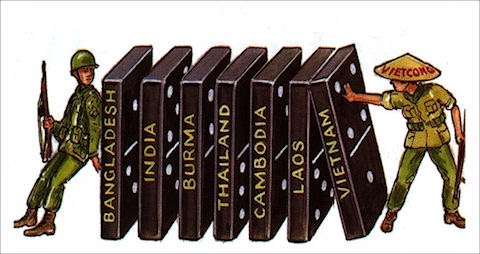 I never subscribed to the Domino Theory in SE Asia. Public libraries were full of books on the subject at the time. Clearly a small Roman Catholic establishment that formed in Saigon during the French colonial occupation was trying to impose itself on the Buddhist rural peasantry. The cadres from North Vietnam were physically indistinguishable from the rural population in the south. It was always going to end in the humiliation of the US military.

I attended protest meetings at the University of WA which were mild affairs. A Liberal Senator from the Eastern States used to fly over to try and stir students up. When public opinion turned against the war the politicians did not want to have anything with returning Veterans.

I did not have much sympathy for Vietnam Vets until I read   Well Done Those Men by Barry Heard an account by one of the Nashos in the first birthday draft of his deployment and subsequent problems with late-onset Post Traumatic Stress Disorder - he poos himself when under stress, such as when he meets people.

There goes our AAA

Now Abbott is trying to replicate Menzies' electoral success by sending military advisers to work alongside Iraqi troops to combat Islamic State fighters who, when they take down their black and white flags, are indistinguishable from the local populations. The ABC reports that this will be a "triple A" mission - Advise, Assist and Accompany.

The most traumatic events faced by Australian combat troops in Afghanistan were green-on-blue attacks. The perpetrators in Iraq will have a vast area to escape into, currently occupied by Australian jihadists.

For the rest of us the biggest problem is the effect on Australia's credit rating. The deployment has already added $1 billion to the Australian deficit and there are still no Australian troops in Iraq. To put this in perspective: this is 40% of the capped $2.55 billion has budgeted to be spent on "Direct Action" over six years to meet Australia's minimum international obligations on Climate Change; this is more than twice what it would cost to restore the Pitt/Castlereagh Streets tram loop and make the Sydney CBD future proof.

When George W Bush invaded Iraq Australian Special Forces had entered Iraq and were killing Iraqis trying the defend their Homeland before the countdown to his ultimation had expired. If I was an Iraqi I would not have forgotten this. When Australian troops are cleared to enter Iraq the Islamic State fighters will think all their Christmases have come at once - if they believed in Christmas.