The length of the trams would have little impact on traffic flow at the Eddy Avenue/Pitt Street intersection - even a 57 metre tram should just be able to cross the intersection in the minimum time allowed for pedestrians to cross - 26 seconds. However we have to consider impact on the routes that vehicles displaced from Rawson Place have no alternative but to take: Liverpool Street and Bathurst Street. The closure of Rawson Place turns these into arterial routes.

At Bathurst Street a tram movement shuts down all traffic movements other than pedestrian crossings in parallel with the trams and once again pedestrian densities are among the heaviest in the state. The cumulative run times in the EIS asserted that it would take 1 minute for a tram to set down/pick up passengers and pass from the "World Square" stop to Town Hall stop. The stops are literally a stones throw apart - it takes less than 2 minutes to walk the distance as pointed out in a post on 21 Dec 2013 By George, I think she's got it, but since it takes a five-segment trams 87 seconds to pick up a couple of passengers this is hardly credible. It is physically impossible for the trams to accelerate to the 60 kpm speed limit, hit the pedestrianised zone at this speed then abruptly slow down to a stop - drivers would travel the distance at little more than walking speed. The question that needs to be asked is: would trams travelling at little more than walking speed be given priority by the traffic lights? That is to say, would trams from both directions trigger a change in the signal phasing? That is the 2.2 billion dollar question.
The "mesoscopic modelling" undertaken by TfNSW in 2013 which forecast peak hour intersection performance over the broad CBD clearly assumed that SCATS would continue to control traffic light phasing at Liverpool Street, Bathurst Street and Goulburn Street intersections with George Street - improvements in level of service (LOS) at these intersections in the 2021 light rail scenario compared to 2021 Do Minimum scenario were +2 (off the scale).

The modelling was infantile and based on preposterous assumptions and the conclusions drawn by Booz & Company published in the EIS are risible but we can conclude that there was no intention to give trams priority at intersections in the CBD.

In fact the intersections of George Street with Liverpool and Bathurst Streets would operate much the same with trams as they do now. There is now a bus (and left-turn) lane and two general-vehicle lanes south-bound from Bathurst Street and a bus lane and two north-bound general-traffic lanes to Liverpool Street. The significant difference is that the trams obliterate the second general-traffic lanes. This second general-vehicle lane allows buses to leapfrog buses at stops and pass through intersections two at a time (as you can see in the Google Earth snapshot) and to achieve capacities far in excess that which the tram service can achieve.

At present most of the vehicles travelling north of Bathurst Street are buses heading for the Harbour Bridge or running on empty to Circular Quay in order to physically turn round. If Baird wins the election on 28th March there will be only trams from Kingsford and Randwick, running on empty to Circular Quay, north of Bathurst Street. There are very few private vehicles travelling in parallel with the buses south from in front of Town Hall during the pm peak - mainly there are just taxis from the Hilton and the hotels at the Rocks - as you can observe any evening. With good reason: there is very little parking along George Street north of Bathurst Street and the parking is very expensive. Only buses can turn into George Street southbound south of Grosvenor Street and no driver in his right mind would use George Street to access the southern half of the CBD rather than use the Western Distributor.

The expensive off-street parking along George Street will continue to exist if George Street is pedestrianised. Drivers displaced from George Street will be forced to take tortuous routes crossing the dual tram tracks at least two times each way and more likely three times. This traffic will return to George Street southbound with a vengeance at Liverpool Street and will have been forced into one lane. This is effectively the only change to the traffic flows at the intersections, along with the additional traffic displaced from Rawson Place.

Traffic flows along Bathurst Street and Liverpool Street become gridlocked at the George Street intersections during the pm peak and SCATS takes over, co-ordinating the traffic-light phases to give  continuous streams of traffic along George Street during its phase. Between 4:20 and 4:50 pm on Friday 28 November 2014 SCATS was allocating about 40 seconds to east-west flows and 1 minute and 9 seconds to George Street flows.

The traffic lights at Goulburn Street/George Street intersection are not co-ordinated with the lights further north and take between 50 and 56 seconds in each direction tallying up to 1:47 during the evening peak.

Bear in mind that the buses are carrying much higher loads of passengers than trams running largely empty from Circular Quay will ever carry - they must have capacity to pick up the bulk of their passengers at Central. There are very high volumes of pedestrians crossing Bathurst Street to and from the Town Hall station concourse.

Crunch time at the pincer movement of death 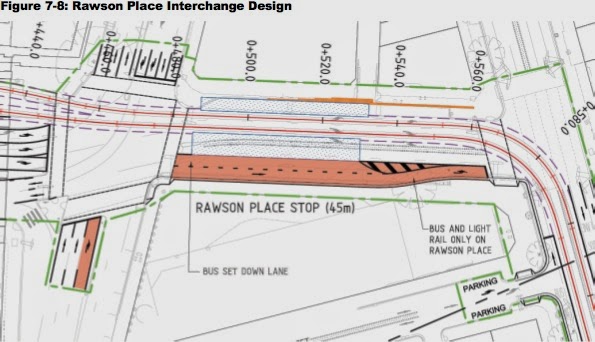 Trams at the Pitt Street/Eddy Avenue intersection can not be given priority signal phasing without creating intractable congestion in traffic flows to Parramatta Road and City Road and crippling every bus service to the Inner West and the southern suburbs. So trams after spending one and a half minutes setting down and picking up passengers could be held up an average of (1:47 - :27) minutes = 1 minute and 20 seconds. In the worst-case scenario the tram could have been held up an additional 40 seconds at each of the intersections at Bathurst Street, Liverpool Street and 50 seconds at Goulburn Street and it could have taken longer for passengers with mobility problems to embark or disembark from the tram. It is the worst-case scenario that determines the safe spacing of trams.

Spacing of trams is the only mechanism for stopping a following tram from crashing into the tram ahead. Railways run on tracks that have sensors and signalling but this not possible on trams travelling on public roads and through pedestrianised zones. If a tram that has had a clear run (no delays at intersections) arrives at a stop before the tram ahead has moved out from the stop it will smash into the back of the stationary tram. This would occur in an area with large numbers of pedestrians and with passengers on both trams standing without bracing themselves.

Here the length of the trams has great significance. Nine-segment trams will be 12 metres longer. The rear of the tram will be an extra 12 metres from where the driver of the following tram was expecting to stop so it will be moving faster. The trams are heavier so the following tram has more kinetic energy and the stationary tram more inertia.

The consequences are so horrendous we must assume that the trams will have sufficient spacing when they are dispatched from the three platforms at Circular Quay, carrying negligible numbers of passengers. You can do the maths. The timing between trams when dispatched will have to be a minimum of 5 minutes. This does not take into account any delays that may occur in the George Street pedestrianised zone. This is the timing between trams from day one of the tram services and it never gets any better. It gets progressively worse throughout the future life of the City of Sydney.

The frequency of at least 5 minutes between the nine-segment trams is significantly different from the frequency of 1 minute and 44 seconds that would be required to achieve the capacity of 13,500 passengers per hour claimed by Ms Berejiklian.

Trams would be arriving at the Randwick and Kingsford terminuses more than 10 minutes apart.