The Western motorway east of Parramatta carries the most traffic of any road in the state. Nick Greiner recognised this when he placed the toll booths to pay for the extension of the motorway west of Church Street onto the existing motorway to the east. Bob Carr promised to refund the toll paid by private car owners from general funds and won the election in April 1995 by one seat. Now Baird will reintroduce the toll on this stretch of the motorway to fund the construction of a tunnel under Parramatta Road.

Placing the toll booths to the east of Church Street had unexpected consequences which I pointed out in a submission to the EIS of the M7 motorway: "No power in the known universe can prevent motorists from transferring to the M4, travelling to the Prospect Highway for free and reaching the M2 motorway in half the time". I discussed this in a previous post in February The power of pricing. The M7 retained its planned alignment but the second half of the motorway from Liverpool north of the western motorway was for free. The deliriously incompetent public servants put in control of TfNSW were oblivious to the compromises taken when waxing lyrically on the future of NSW roads but evidently there were former officers of RTA who had retained a memory of what is now referred to as toll capping because it is now described as successful - the M7 did not file for insolvency before being taken over by Transurban. Previously toll capping was used to solve a particular problem created by Greiner but now it is being used in a particularly nasty example of class warfare.

The Greiner stratagem returns with a vengeance

Plans for the extension of the M4 eastward from just east of Concord Road to the start of the City-West link road at Wattle Street have long been on the drawing board. Attempts to press ahead have been vigorously resisted by residents along the link road. North Shore politicians have countered this by not disclosing any details, just dotted lines of the route with silly little arrows suggesting on and off ramps. 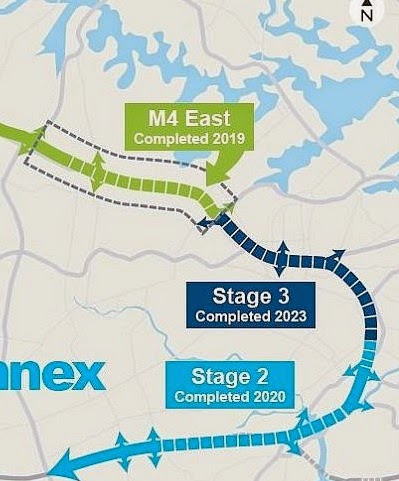 Unlike previous plans there is now an intention to replicate Parramatta Road with tunnels with three lanes in each direction leading to ramps back up to Parramatta Road somewhere to the west of Pyrmont Bridge Road in a Stage 3, in the same manner that William Street and Epping Road were replicated. The PPPs that built the previous schemes filed for insolvency and the backers lost everything. This time it will be an "availability PPP" where the NSW taxpayer is sure to be the loser.

As with the previous Greiner stratagem it is motorists using the existing roadways east of Church Street that will pay for the tunnels under Parramatta Road. These roads are currently free now that the contracts with the PPP that built  the missing link in the M4 have expired. Now motorists will be slugged $3.90 to drive to Homebush Bay Drive with a minimum cost of $1.50 for one small section. Driving further to the City-West link would cost a further $3.60 with a minimum cost for one leg of $2, a total cost of $7.50, except there will be a maximum cap of $7.35 for a journey. Motorists who decide to drive to the CBD (i.e. Pitt Street) rather than use public transport or who drive to the airport will pay less than nothing for the rest of their journey. These figures are for 2013 and are already being indexed for inflation.

So who pays for the insanely expensive tunnels of Stage 3?

It is of course the Tradies and the working poor of Western Sydney who have to use the local roads to get from job to job who will pay for the free ride of commuters to the CBD (i.e. Pitt Street).

The people of western Sydney won't just be paying for the tunnels with the tolls. Baird and Abbott will be tipping $1.8 billion and $1.5 billion of taxpayer's money (or rather deficit spending to be paid off by tax rises in the future) into the project. This is money that would otherwise fund schools, hospitals and aborted bombing missions over Iraq. The $1.8 billion announced by the state government is just a token amount for a project that has not been designed, costed, disclosed or subjected to any kind of feasibility study. The Baird government has promised that the NSW government will provide unlimited taxpayer's money to fund a project estimated to cost well in excess of $11 billion.

When Baird announced his plan to pay a Chinese communist corporation to bombard Town Hall station with 40,000 passengers an hour, forever, he also announced plans for a extension from Anzac bridge to the Stage 3 tunnels. The project had not been designed, costed, disclosed or subjected to any kind of feasibility study but was given a cost of $7 billion. As always the project is just a string of dots with two little arrows at the end.

Currently the City-West link road gives traffic from the west free access to the Anzac bridge and thence the Cross City Tunnel and the Western Distributor and the Harbour bridge. They need a tunnel from Parramatta Road like a hole in the bedrock.

Currently motorists from the North Shore travel for free from the Harbour tunnel to the south via the Eastern Distributor. The sole purpose of Baird's project is to give them the choice of travelling via the Harbour Bridge and the Anzac bridge. Motorists who choose this route will be clogging both these bridges which cannot be increased in capacity. They will be clogging two vital arteries to the CBD and the Eastern Suburbs forever.

No toll can be placed on this northern extension as the alternative routes are free. So Baird will fund it by selling taxpayer assets, the "poles and wires" of the electricity distribution network - the Magic Pudding of North Shore residents. So residents of the Northern Suburbs will be driving their multiple cars per household to their holiday homes on the south coast for free. The whole cost of building the tunnels of Stage 3 will fall on the tradies and working poor of western Sydney who have no alternative but to use the local roads to go from job to job. Unlike the Greiner project Baird has not set any date at which the tolls would be ended.

The case against the WestConnex project is covered more extensively at westconnex.info