Terminator 3 - The end of civilisation as we know it

The computer-graphics generated videos released by Baird in June showed a change of plan. Traffic from the six extra lanes of the M5 would be dumped into Enmore Road to the southwest of King Street Newtown (as far as can be made out from the vague maps) instead of or as well as Parramatta Road.
Now four months later Baird and Abbott have come together with the Roads and Maritime Services Minister Duncan Gay to stand in front of a poster that revises the plans yet again. Not minor revisions but revisions that destroy the arguments advanced for the WestConnex project from the very beginning. The public relations spin for the project was no different from those advanced for the Cross City tunnel and the Lane Cove tunnel. The number of traffic lights avoided by replicating the surface roads with tunnels were counted and claims were made as to the time savings that would ensue for motorists using the tunnels. I won't insult your intelligence by repeating them. Now Baird and Abbott have proclaimed that the road tunnels will remain deep under the Princes Highway to the west of the Cooks River rail terminal. The only places where traffic can enter and exit for the six lanes of the "New M5" will be Enmore Road and Euston Road - a binary choice. This is forever.

Duncan Gay boasted that they were not making the mistakes of the old M5, which had steep gradients as it kept returning to the surface to provide connections to the surface road system. The "New M5" would have slight gradients for 9 kilometres from its start in Kingsgrove until it reaches St Peters. Not surprising as, in plane English, WestConnex does not connect with anything.

Mr Gay denied flatly that dumping traffic in St Peters would overload roads in St Peters and Newtown. He did not mention plans to also dump traffic into Enmore Road. He insisted that traffic would make a right-hand turn from Euston Road into Campbell Street, cross Alexandra Canal by a new bridge and percolate through chronically congested roads north of the airport to the terminals rather than use the existing M5 tunnels which provide direct uncongested connections to the terminals. This is "absurd" as the former Minister for Infrastructure Anthony Albanese has pointed out. The existing M5 also gives direct access to the container berths at Port Botany.
Euston Road feeds traffic from the "New M5" into Botany Road, Elizabeth Street and Crown Street only. Traffic heading for destinations east of Crown Street would use the existing M5. Yet Baird is crippling traffic flows in these traditional arterial distributors between the Eastern Suburbs and the rest of Sydney south of the Harbour with the George Street trams.

You would have noted the common denominator in all the roads targeted by Baird on Melbourne Cup Day 2014: they carry all the bus services from the western, south-western and southern suburbs of Sydney into the CBD. 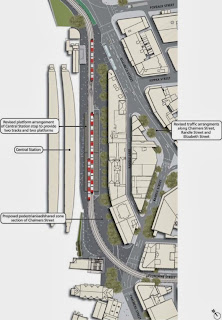 The never-exhibited amended EIS for the CSELR project conceded that the pedestrianisation of Chalmers Street would result in congestion at the intersection of Elizabeth Street, Eddy Avenue and Foveaux Street that was off the scale: a level of service rating of D, as bad as it can get. I discussed this in a post on June 6 Level of Public Service: D. The underlying assumptions used to predict the traffic flows in 2021 were never revealed and cannot be disputed as the RTA stopped publishing traffic-flow data in 2006. However some of the assumptions were clearly preposterous. They were claiming that traffic to the CBD would be reduced because people would find the transfers from buses to trams so attractive they would stop parking in the CBD.

The predictions of traffic flows in 2021 could not have factored in the effects that dumping traffic from the tunnels of the "New M5" into King Street, Botany Road, Elizabeth Street and Crown Street would have on bus services south of the Harbour and congestion at both ends of Eddy Avenue. There was no warning that Baird would do this until his announcement on Melbourne Cup day 2014. There must be an independent and public assessment of the congestion caused by the trams before any contracts are signed for the project. The inquiry could also consider the effects of trapping buses in a bus bay at the Foveaux Street intersection.

Motorists intending to use the Cross City Tunnel or the Harbour Bridge or with destinations in the the northern CBD use the City -West link road and will continue to do so. Traffic dumped from the tunnels into Parramatta Road has nowhere to go except Pitt Street. There is literally no parking east of Pyrmont Bridge Road and no possibility that there ever will be except for a small amount of parking on the ground floor under Broadway Shopping Centre, accessible only from a tortuous route from Bay Street. The strip of Parramatta Road to the west of Pyrmont Bridge road will be devastated by the property resumptions required to bring the traffic to and from the surface.

The intersection of Pitt Street and Eddy Avenue was also given a level of service rating of D but this would not have factored in the effects of the revised plans for the "New M5" and the increased length and frequency of trams demanded by Connecting Sydney consortium.
Ms Berejiklian refuses to reveal the length of the trams that Connecting Sydney consortium insists on running. The trams will be longer than the maximum length of the road trains that are allowed on the Stuart Highway and outback highways in WA and Queensland. The coupled Juggernauts will be twice as long.

The trams will be travelling slowly through the intersection of Pitt Street and Eddy Avenue as they come into or out of the stops at Rawson Place even if they are given priority at the lights. They will be crossing on average every minute at peak periods we are told. Pedestrians will be blindsided at every crossing to and from Central Station making it even more unlikely that they will reach the speeds of sixty kph between stops used by TfNSW to calculate vehicle flows through intersections and for calculating the capacities of the tram services. Buses terminated at Pitt Street will require a separate phase to make a right-hand turn into Rawson Place in order the pass through the pincer movement of death at the George Street pedestrian crossing which also has a level of service D. It is worth pointing out that the trams passing through Eddy Avenue will be largely running on empty after dumping passengers in Chalmers Street. They will be all but empty when they reach the terminus at Circular Quay.

A proper independent assessment of the impacts of the revised-since-the-EIS trams on congestion in bus routes from south of the Harbour into the CBD must be made before any contracts are signed. This can of course only take place when it is known whether traffic from the "New M5" will be dumped into Parramatta Road as well as Enmore Road and what will happen to traffic from the Glebe Island U-bend if this ever goes ahead.