The Green and Black

I am not alone in drawing attention to the many contradictions in the EIS, this is an extract from the submission of Kingsford South Precinct, one of the resident groups sponsored by Randwick Council, on page 22 of website submissions here http://majorprojects.planning.nsw.gov.au/?action=view_job&job_id=6042

Note that Randwick Council sponsored community groups to examine the EIS. Clover Moore has embarked on a campaign of letter drops with false information and has maligned community groups with unsubstantiated claims about alternative routes.

Which brings us to the City of Sydney's hysterical response to the the EIS.
The Technical Papers state: "To mitigate the impacts to local access the following network changes are proposed: Reinstate the Cooper Street connection to Riley Street to provide access for local residents." This is disingenuous. If Cooper Street reserve in not obliterated the only entry for rag-trade heavy vehicles to the Surry Hills commercial ghetto, from the south, is to circle the entire ghetto - the yellow line on the Google Earth map above. Traffic from Chalmers Street must thread along the single lane of Devonshire Street past the pocket parks closing off Holt and Waterloo Streets and enter from the northern end of Waterloo Street, where it has narrowed. This is simply to avoid the possibility that turning heavy vehicles may "encroach on the light rail alignment" - limiting the speed at which trams can travel through Surry Hills.

This provoked an hysterical response from the City of Sydney. Their submission refers to a table in volume 1A which is a cut and paste of the passage in the Technical Papers. They shriek: "The Proponent should consider that opening Cooper Street will help local circulation but will provide a by-pass from Elizabeth Street to Crown Street."

The recommendation is: "That the reopening of Cooper Street only proceed if the Proponent demonstrates that it is essential to traffic flow and local access."

Neither TfNSW or City of Sydney show any concern for the Child Care centre adjacent to the reserve, that was the subject of a previous post. City of Sydney's only concern is to stop evil motorists from avoiding blocking the only exit to the north from the other Surry Hills ghetto. 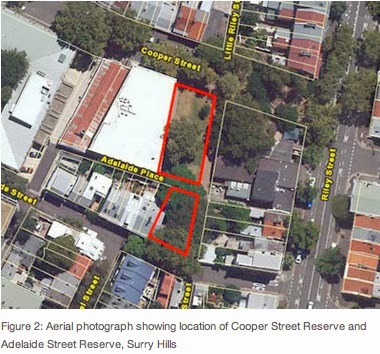 A year ago, when it had become a "stakeholder", the Council amended the Local Environmental Plan 2012 to change the zoning of land adjacent to the reserve, resumed for road widening, from General Residential to Public Recreation. O'Farrell could have a fight on his hands.

The obvious solution to all these problems is to leave Holt Street and Waterloo Street open at their southern ends and to slow down the trams in Devonshire Street so they can cope with the odd turning truck. Even better, to not run trams along a road that is too narrow to accommodate them.

Clover Moore's only concern is the maximise the profits of the the privately-operated tram company by letting it ride roughshod over Surry Hills. She is backed up by her acolyte Alex Greenwich (get it), the Member for Sydney, who opines in the submission posted on his web site: "Pocket parks at road closures - These closures must provide high quality plazas and pocket parks at intersections to help green and pedestrianise the area and add to the village atmosphere".

The EIS shows no concern for the employers in this major commercial area of Sydney; only for local residents, who vote at elections. O'Farrell is apparently prepared to do to the rag trade and News Ltd and all the other smaller businesses in the area, what his Federal colleagues are doing to the car industry and the Goulburn Valley.

The community independents have a long history in this area. When they controlled South Sydney Council the area had one of the highest unemployment rates in Australia. When South Sydney was merged with Sydney they took control of the goose that laid the golden eggs. Now, sure enough, they are killing the goose.