The City of Sydney submission to the EIS makes the stipulation (recommendation 47) that the work site shall be defined as per the attached plans (appendix B) produced by TfNSW.

These plans were never disclosed until now, after the close of submissions, and they explain things that TfNSW officers refused to discuss.

The text of the report by consultants Parsons Brinkerhoff (Chapter 5 -Part B page 34) states: "At the corner of Chalmers and Randle Street, the existing footpath would also be extended, as Randle Street would change to two-way traffic movements and the turn from Randle Street into Chalmers Street would be removed." This does not make sense and it was not possible to work out what was meant, as the figure 5.22 in the report was cropped so as to not show the intersection. The figure was displaced to show two platforms of Central Station but only a glimpse of Elizabeth Street, but enough to confirm only one north-bound lane in Elizabeth Street. The "single general traffic lane provide on Chalmers Street" is just a rat-run for very stupid rats, as pointed out in a previous post.

Now City of Sydney has inadvertently released documents that show what the consultants were describing. There is indeed one lane of traffic turning into Randle Street from Chalmers Street, across the tram lines with priority signalling, where trams are slowing to come to the stop.

During construction it will be impossible for pedestrians from the Eddy Avenue station entrance to access the eastern side of Chalmers Street as the pavement comes to a point at the crossing. What happens after construction cannot be determined as the crossing has been cropped. 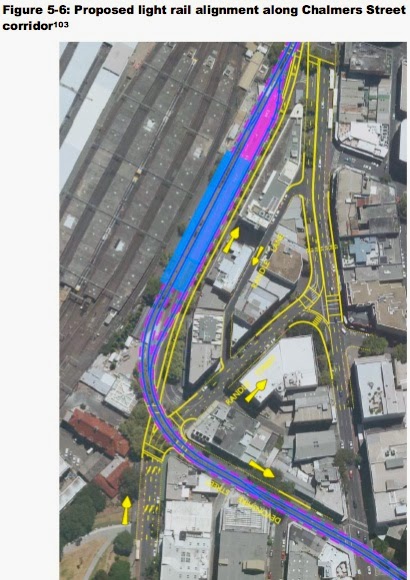 TfNSW's other consultants, Booz & Company came up with a radically different design which is also included in the EIS, in its Technical Papers (5.4.1.4), without explanation. Booz & Company assert baldly, without any data on building alignments and kerb alignments and lane and footpath widths: "provision of two northbound lanes could be provided with the loss of only one southbound lane through kerb and lane adjustments". Note that the consultants say could not would. The yellow lines in the diagram are presumably the kerb and centre-line alignments and the width of the footpaths on the western side of Elizabeth Street appear to be close to zero. Elizabeth Street south of Foveaux Street is the main pick-up bus stop for buses to southern Sydney whether they travel to Circular Quay or terminate at Central and congestion on this section of footpath would be among the highest in the CBD. 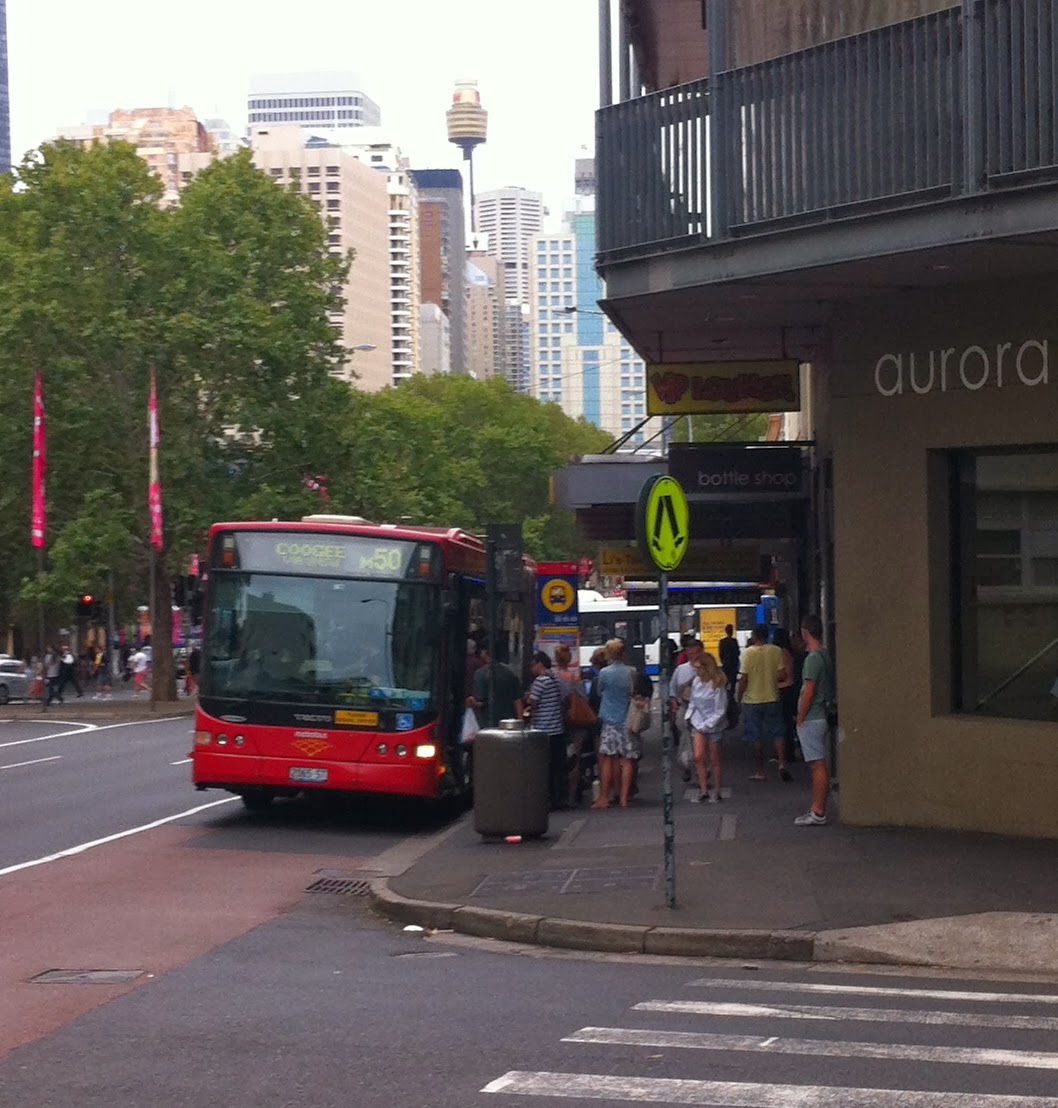 I commented in my submission on the EIS that TfNSW has a history of making convenient assertions and asked for this latter-day assertion to be properly assessed. The EIS is asking for approval of multiple choices. This makes it impossible for anyone to make constructive criticism of the plans, particularly since there are no details or data to work with.

Not that the nutters at City Hall are capable of making constructive criticisms. They seem to be oblivious to the discrepancies in the designs of the different consultants. Perhaps their officers were intimidated by the word technical and failed to read the documents prepared by Booz & Company. The City of Sydney has been working all along with the assumption that the vehicle flows in Chalmers Street would be forced into one lane.

More disturbingly, despite having access to detailed alignment diagrams, the officers and politicians at City of Sydney have failed to pick up the obvious flaws in the plans of both the consultants for the Central (nee Chalmers Street) tram stop. Passengers from the Surry Hills side of Elizabeth Street have to cross to the western side of Chalmers Street then walk south, in order cross the tram lies again to catch an outward bound tram. Extra crossings are provided - like anyone is going to use them. The TfNSW tech guy kept asking how is the situation with this system different from Melbourne. The island tram stop in Flinders Street and the outside tram stops in St Kilda Road at Flinders Street Station are indeed accessed from the pedestrian crossings.
Currently Elizabeth Street bus services conveniently deposit passengers directly at the Devonshire Street Tunnel entrance to Central, and pick up passengers at the Foveaux Street stop. In the modelling of passengers expected to use the tram stops, Booz & Company assumed that people would find catching an outbound tram at the Central stop so difficult they would walk to the Surry Hills stop, except of course for events at the SCG.

Fortunately, if O'Farrell does not return for a second term, the trams will actually have to compete with bus services. Passengers will be able to choose whether standing on a tram with priority signalling and walking long distances to stops, is an advantage over the convenience of the bus services. Voters will be voting for their feet.