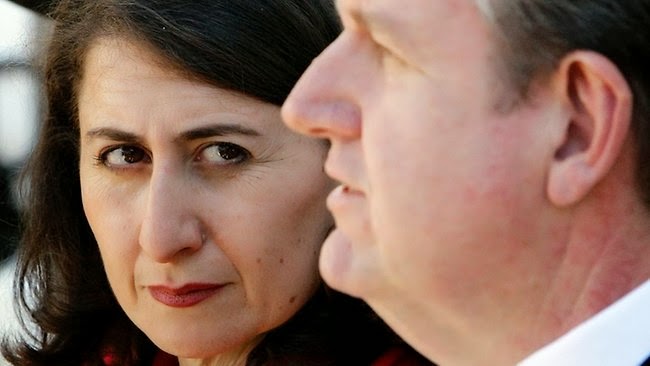 I am a Liberal lady from the North Shore,
If you have to ask what it will cost you can't afford me

The Sunday Telegraph 09 September, 2012 commented: The O'Farrell Government has spent 18 months and more than a million dollars developing a transport masterplan only to present a grand design that is almost identical to the one prepared for the former premier Nathan Rees.

When this was pointed out by Labor MP Ryan Park, Ms Berejiklian said the new initiatives introduced in the masterplan included a second Harbour crossing, 46 corridors and a "strategic network heirarchy". "Another difference between Labor's transport plans and this one is we will deliver."
The second Harbour crossing (a tunnel for trains) has not been designed, let alone subjected to a "pre-feasibility study" or costed. The route for the tunnel under the CBD shown in the 9/11 2013 brochure is a yellow blob covering the whole of the CBD.

The cost would be many billions of dollars and there does not seem to be any reason why this could succeed where the more modest Balmain to Sydney University Metro was abandoned without explanation after half a billion dollars had been spent on property acquisitions and compensation.

The three American-based global consultancy firms commissioned by TfNSW to sign off on the EIS would have cost the tax payers a fortune, particularly if they were being paid by the word. We don't know at what stage they were commissioned or what actual work they were contracted to do apart from signing off on the EIS. It may require a Royal Commission to find out what was taking place at TfNSW the past year.

AECOM seems to have produced some of the figures for parking restrictions in the "light rail corridor". Parsons Brinckerhoff may have some responsiblity for cropping the deliberately-misleading figures for the tram stops in Chapter 5 of the EIS and co-authored chapters 1 to 5 with TfNSW. Booz & Company who co-authored the "Technical Papers" with AECOM is a "management  consulting" firm with no engineering background. The technical papers are meticulous in ascribing the figures and tables reproduced for the EIS to TfNSW. It appears that all three consultants were given access to all the draft plans and alternative plans supposedly considered by TfNSW  and were allowed to come up with wildly contradictory plans for the Project.

You can Google the three consultancy firms to find out their backgrounds. Parsons Brinckerhoff was taken over by a British company in the wake of the Global Financial Crisis. It was announced on October 30, 20013 that Booz & Company would be taken over by the global accountancy firm PricewaterhouseCoopers and it was not a hostile take-over - it was accepted two days before Christmas. It is difficult to see what synergies there could be for the merger, but whatever difficulties Booz & company may have been in when it signed a contract with TfNSW there can be excusing the mindless acquiesce exhibited in the EIS. I will cite one example.

Traffic flow changes
"These traffic pattern changes can be summarised as follows:

This is gibberish. There will be two lanes of traffic along George Street to Hay Street which leads to Darling Harbour and Barrangaroo, as at present, but there will be no bus priority lane and Rawson Place will be closed, cutting off access to Hay Street for traffic from the south and south east. Traffic will be less likely to divert into Wattle Street, much less.

And so on. Booz & Company, or is that AECOM, have confirmed that no modeling has been done on traffic flow in and around the CBD. This should have been done before O'Farrell made his whimsical decision to run trams along George Street. This is what determines if the Project is viable, not estimates of how many passengers can be forced to transfer from public buses to privately-operated trams.

In fact, it can easily be shown that congestion in bus lanes in Elizabeth Street northbound becomes intractable with pedestrianisation of George Street, and this will get progressively worse for the rest of the life of the City. Ditto congestion in Cleveland Street.

Booz & Company conclude, speaking for TfNSW:
"To address the effects of these potential changed traffic patterns, TfNSW and RMS (thats Roads and Maritime Services - O'Farrell's other monster bureaucracy) are working together to identify appropriate upgrade measures. This work is on-going and includes additional modelling assessment at the strategic and operation levels to refine the optimal solution."

In other words, TfNSW and RMS have not got a clue what to do. They are asking Planning and Infrastructure to give approval to a project that has not been established as a viable proposition - it is not viable.

I did not comment on this in my submission to the EIS. What can one say in the face of a mea culpa as comprehensive as this.

Booz & Company conclude: "This work will be completed prior to construction of the CSELR commencing."

Pig's arse it will. The Minister and her Pizza Boy, Jeff Goodling were openly negotiating with PPPs before the exhibition period for the EIS ended. If Planning and Infrastructure give approval to the EIS none of the unanswered questions will be dealt with before contracts are written. All that will be established in the assessment process is whether O'Farrell has subverted the Planning and Infrastructure ministry as comprehensively as he has subverted TfNSW and RMS.