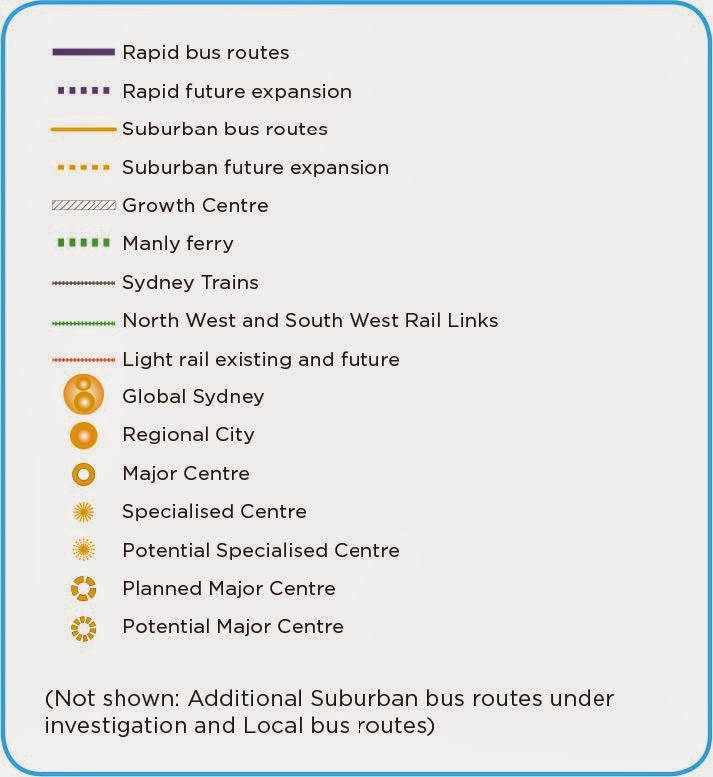 The Deputy Director General TfNSW, Chris Lock told the Randwick business breakfast in April that the Minister had told him to take a Sydney wide view of public transport - the big picha!

The picture above from the brochure published one year after the infamous 13 Dec 2012 brochure is so big it could not fit onto one page of the PDF - it sprawls over two adjacent pages in the printed version. Submissions to the EIS had to be as a PDF so I downloaded a trial of Acrobat XI Pro to convert my 11 page Word Doc submission - Adobe is now owned by Microsoft. I have been unable to get Acrobat XI to display two adjacent pages together, so I will not be completing the purchase - the trial period ends today, one week ahead of schedule.

The jpeg picture above is a collage produced by exporting the figures to Picasa. Making the switch to Apple and Google in 2008 was a smart move.

Sydney already has two Bus Rapid Transit (BRT) routes: the Parramatta to Liverpool past Prairiewood route completed in 2003 and the Parramatta to Rouse Hill route completed in 2007. The Parramatta Liverpool BRT has attracted less than half the projected numbers of passengers, despite running for much of its length from Prairiewood to Parramatta in its own carriageways.
Despite the economic and social failure of these BRTs, O'Farrell is intent on converting existing arterial bus routes into pseudo Rapid Bus Transit routes. The two existing BRTs built by previous competent state governments are in the far west. The sea of purple to the right of Parramatta in the picture above are the pseudo rapid bus routes that O'Farrell has committed to implementing.
The third brochure, published on 12 Dec 2013, gives but one example of an O'Farrell BRT - the Victoria Road route through Ryde. As you can see, more than two stops in three between Parramatta Station and Ryde are eliminated.

With the Oyster (aka Opal) Card passengers can enter and leave buses from all doors simultaneously at stops. The time taken per passenger to exit from a bus and touch a pad with his card or enter the bus and press a pad with his card is about the same regardless of whether passengers are forced to accumulate at a just a few stops. The only improvements in run times for full routes would come from buses not having the decelerate and accelerate as often, and they only do this when signalled by passengers.

TfNSW cheerfully acknowledges that people will take much longer to walk further to a bus stop, but that is the price you pay for not having a chauffeured limousine service like the Minister. People with disabilities are proportionally the highest users of public transport, for obvious reasons, and will be the most disadvantaged by the longer distances between stops.

I have no idea what modelling was used for the Parramatta- Liverpool BRT, but it is easy to see why it  was out by more than a factor of two in estimating passenger numbers. Anyone at Liverpool station has a choice of travelling by rapid bus or rail to Parramatta Station, and commuters in between can make a beeline to a another rail station. And this BRT really is rapid!

O'Farrell clearly believes that claims of reduced journey times, however outlandish, will be a vote winner amongst commuters to the CBD from Parramatta Station who choose to take a Victoria Road bus service that deposits them in Wynyard Park or onto the roof of Edgecliff station rather than take a train. He could be right; but anyone as stupid as that would be unlikely to cast a formal vote.