The constriction of the lanes in Elizabeth Street northbound at the Old Supreme Court Building has been a fact of life from the early days of the colony, but the other congestion points for bus routes are more recent. The difficulties for buses turning from Druitt Street into Clarence Street arose when a previous, competent State Government established the bus-only lane against the flow, east along the Druitt Street on-ramp. Askin had planned to widen Druitt Street.

I objected, in vain, to the narrowing of George Street northbound to two lanes in front of the Cinema Complex. Buses returning from the lay-over in Lee Street to the Harbour Bridge are hit with the double whammy of this constriction then the turn into Clarence Street. But this need not be so.

Buses from the Harbour Bridge that turn into George Street in front of the Town Hall on the way south to "Railway Square" and beyond, can turn into Kent Street, which currently carries no bus services, via Liverpool Street and return to the Bridge without adding congestion to the bus services using Druitt Street.

O'Farrell seems to believe that if he hands over George Street to Bra boys and Lycra-shirts the people of the Eastern Suburbs will roll over and let him close Druitt Street at Kent Street to all vehicles except buses from north of the Harbour, and will not object to unlimited bus services from the Harbour Bridge congesting the bridgehead in Elizabeth Street northbound. If there were not obvious alternatives to what is being proposed O'Farrell might conceivably get away with it.

O'Farrell does not have a mandate to proceed with letting contracts for a Project that has not had any details disclosed, and he should allow the voters in NSW to decide the future of the City of Sydney at the next election in 18 months time. At this time the voters will have had an opportunity to be fully informed as to the irretrievable consequences of his Government's proposals. 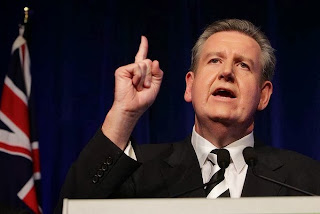