Not just stunned or moribund 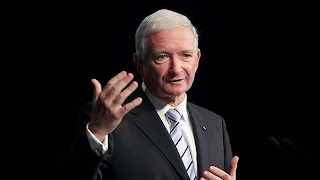 Nick Greiner was forced to resign as Premier of NSW when Clover Moore and Tony Windsor threatened to march on parliament and lead a vote by the four independents on a motion of no confidence in the Government. Greiner and Brad Hazzard had admitted their statements to an ICAC inquiry into the offering of an executive position in the Environment Protection Agency to fellow Liberal MP Terry Metherell were wrong. The Commissioner Ian Temby had concluded that Greiner would be seen "by a notional jury as conducting himself contrary to known and recognised standards of honesty and integrity".

Nick Greiner was forthright about his role as unelected Tsar of NSW. In an interview for an article on infrastructure he said they inherited a moribund Public Service. They would resurrect Projects that had been rejected in cost-benefit studies. 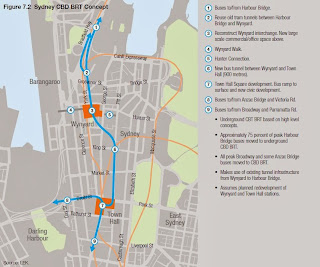 Infrastructure NSW made an informed assessment of a tramway along George Street - one of their comments is quoted in the side bar of the blog. The old tram tunnels from the Harbour Bridge to Wynyard Station had been under consideration since tram lines were removed from the Bridge but could not be used for buses as they would not be able to turn around. The CBD bus tunnel project extended the tunnels from Wynyard to the Town Hall, popping up, presumably, in the Woolworths and adjacent buildings in Park Street, that Sydney City Council had been relentlessly acquiring in front of the Town Hall.

Incredibly, there was still no provision for buses to turn around. Buses to and from the Harbour Bridge would presumably continue along Broadway and Parramatta Road or along Victoria Road. Infrastructure NSW proclaimed this as a virtue, asserting that parts of central George Street could be "fully pedestrianized" - no buses from Parramatta Road and City Road would be able to turn around at the Circular Quay dead-end. Why are Liberal Party MPs, and the Public Servants they appoint, unable to comprehend that buses need congestion free roads in order to turn around? Is it because they have never ridden in a bus in their lives? Yeah, that would be the reason. 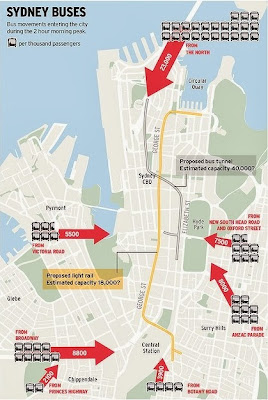 The diagram left was obtained by the Sydney Morning Herald using a Freedom of Information submission. It was published November 24, 2012. It was from a study by the international consultants GHD commissioned by the previous, competent State Government.

The Infrastructure NSW proposal, and the proposal rejected by the previous Government, merely duplicated the distribution of buses currently performed by York Street, at a cost of $2 billion. The only advantage over York Street was there was only two stops - Wynyard and Town Hall Stations - avoiding the congestion around Wynyard Park. Little wonder it failed all cost-benefit studies.

The Infrastructure NSW proposal only ever existed as a few press releases. Despite this Transport for NSW devoted two pages of the 13 December 2012 brochure to attacking "the bus alternative". When an imbecile can attack your proposal you really are troubled.

Infrastructure NSW also proposed extending the Western Freeway from Strathfield to Port Botany using cut and cover under Parramatta Road. A competent, "moribund" Public Servant would have calculated that this was not practical and would given the government expert advice.
Posted by Unknown at 18:12