Mind your PPP's and Queues 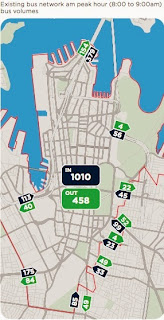 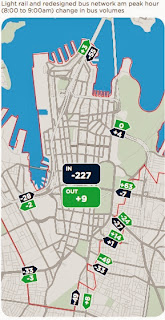 The 13 Dec brochure had the diagrams above purporting to show the numbers of buses that would be removed from the CBD during the morning peak hour by the trams. I apologize for reproducing such deceptive diagrams in an impeccable blog. PUSH has asked TfNSW in writing to clarify which bus services would be terminated only to be told that bus routes are still being modelled. This will still be the case when the ESI is released.

In fact TfNSW is only claiming the "light rail would take 180 buses out of the CBD while additional bus network changes would bring this to a total of about 220 fewer buses entering the city centre in the morning peak hour." However more than half the buses "taken out of the city centre" are passing tangentially to the CBD along Eddy Avenue to "Railway Square" - the bus layover in Lee Street. It is easy enough to generate these figures - just download the time tables and add up the buses during the chosen hour, but the data is meaningless without knowing the patronage at different stages of the route.

Bus services from the south east are spoiled for choice of how to approach the city:
TfNSW clearly intends to shut down routes using Foveaux Street, forcing buses to negotiate the one lane remaining in Chalmers Street.

The bus routes using the Eastern Distributor were introduced by previous, competent State Governments. The routes start with an X rather than a 3 and operate to all the south eastern suburbs. In the morning peak hours the buses stop in Bent Street then proceed to Martin Place and back along Elizabeth Street, Liverpool Street, Oxford Street and Flinders Street to the exclusive bus roadway in Moore Park. The buses travel through the Randwick civic and retail centre in Belmore Road and take 15 minutes to get from Randwick Junction (the intersection of Belmore Road and Alison Street) to Bent Street and take 17 minutes to get to Martin Place. These services avoid the Elizabeth-Street-northbound bridgehead between the St James Centre and the Old Supreme Court Building and can be readily expanded. There are potential supplimentary routes using Macquarie Street and Castlereagh Street.

The buses are packed, as you would expect, since Bent Street is an office-space hub with Aurora Place, Chifley Tower, the Governor Macquarie and Governer Phillip towers and the new Richard Rogers designed tower, 8 Chifley. Then there are the office towers at Martin Place. 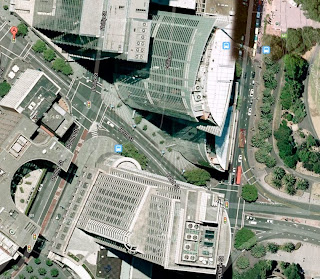 Commuters in Coogee and Maroubra, with the trams, will have a choice of:
Needless to say, no one in their right mind would transfer to light rail. So TfNSW has a stratagem. The map above is from the "Info Boards" released in September, 2013. The bus services from the south east do not travel along Elizabeth Street but go, presumably, to the Phillip Street terminus. This is really bad news for residents in Randwick as the only destination they can reach by bus is the ferry terminals. To reach any other destination in the CBD, say from Randwick Junction, they will need to walk the whole length of Belmore Road to catch the cattle cars.

Fortunately, it is ridiculously easy for future State Governments to reverse this decision. Investors contemplating investing in a PPP (Private Public Partnership) will need to bear this in mind. The O'Farrell Government has suffered swings in by-elections greater than those seen in the Wranslides.

The Xnn bus services from the south east cannot be crushed as they avoid the bridgehead in Elizabeth Street northbound at the Old Supreme Court Building. It is physically impossible, however, for the bus services displaced from George Street by the tramway - the Parramatta Road and City Road services and the Harbour Bridge to Railway Square services - to avoid this bottleneck. They are completely and irretrievably ...  mind your p's and q's.
Posted by Unknown at 02:09