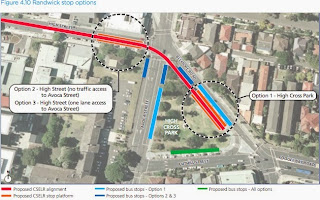 There is a whole volume (Volume 1A, 34 pages) in the voluminous EIS detailing how the self-proclaimed geniuses at Transport for NSW grappled with various design options. Apparently some "stakeholders" (a euphemism for eco-nazis) on the Randwick City Council threw hissy fits over the location of the terminus of the Randwick tram rails. But they quickly accepted that the only thing that mattered was the commercial viability of the privately-operated tramway.

Currently there is no right-hand turn from Belmore Road into Avoca Street. Belmore Road east of Avoca Street is one-way south-east and the small number of vehicles needing to make the right turn use the right-turn lane into the Cuthill Street slingshot. In order to transfer passengers from buses to cattle cars "across the platform" buses must travel against the flow. This was covered in the post "Houston, we have a problem". This was the option foist on the demented burghers of Randwick.

The EIS states that 85% of passengers on the cattle cars will transfer from buses. But what happens to the public buses when they have discharged their seated passengers onto the privately-operated cattle cars that have 80 seats and standing room only for 220. Believe it or not, they are to be forced to continue to Circular Quay, which is the only place in the CBD where they can physically turn around, using the route of the AM and PM peak X-services, paying the toll to the private operators of the Eastern Distributor. The difference is that O'Farrell will not permit the public buses to enter Elizabeth Street: they must return via the Eastern Distributor.

On their return the buses must make the forbidden right-hand turn into Avoca Street and pick up passengers on the other two sides of the triangle. There are separate platforms for the AM and PM peaks for the cattle cars - they switch tracks at the top of the diagram. I am not making any of this up.

Currently buses from the South-Eastern Suburbs access Elizabeth Street in the AM peak from Bent Street via the Distributor or from Liverpool Street via Flinders and Oxford Streets. Between the two they reach destinations in the central CBD in less than half the time it would take a tram to cut a swath through Surry Hills and China Town even with a multimillion dollar underpass under Anzac Parade. The very small number of passengers that need to go the final stop to Circular Quay can, with the Oyster (aka Opal) Card, catch any bus in Phillip Street. They are are coming through not every three or six minutes but every 10 seconds (bumper-to-bumper) and are at this stage carrying only a few passengers. In the PM peak buses return quickly all the way to Circular Quay using the Distributor before picking up passengers in Elizabeth Street.

So it is easy to see why O'Farrell will do anything to stop the buses from entering Elizabeth Street. But what can he do? Write draconian penalty clauses in contracts with PPPs? Make it a criminal offense for someone from the south-west to set foot in Elizabeth Street?

Which brings us back to the tilted figure. Belmore Road when it passes through the traditional Randwick Civic Centre is a two lane each way road, which is why right-hand turns into Avoca Street are banned. The right-turn lane for buses-only required for the "indicative plan - Randwick stop" has been cropped out of the tilted figure 5.34 (Chapter 5, page 47 of the EIS). But that is not all that has been cropped out.

It does not appear to be physically possible for vehicles other than buses to access La Perouse Road or Coogee Bay Road (a major local arterial) from Belmore Road or Avoca Street. The figure 5.34 in the EIS has been tilted and very carefully cropped to conceal the fact that there will be at most one lane for all the traffic from Belmore Road and Avoca Street to reach the local arterials. The impact this will have, in conjunction with the diversion of pedestrian traffic, on businesses in the heart of Randwick are too horrible to contemplate.

When buses proceed north of the Randwick triangle they have only one destination - Manly. Businesses can forget about dressing up their windows. The south-eastern bus services will exist solely for the benefit of Manly residents.

The Minister for Transport has had Questions on Notice in Parliament about the CLESR Project and has replied that the 13 December 2012 brochure fully disclosed the project and has told questioners to wait for the EIS. For the EIS as well to be deliberately deceptive shatters one's belief in the Westminster System of Government. 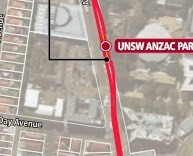 It is not just this figure. The indicative plan of the UNSW - Anzac Parade figure reproduced in the last post was cropped to conceal the devastation wreaked on the right-hand turn into Day Avenue used by Kingsford bus services. The next post will deal with a much more important case of cropping.

Deliberate deception is systemic within Transport for NSW. But now we've seen everything. We can die happy.
Posted by Unknown at 23:48