"It is not mathematically possible."

The Deputy Director General of TfNSW, Chris Lock, told the Randwick burghers business breakfast in April: "There's a queue of buses coming over the Harbour Bridge all trying to get to York Street around Wynyard, and they back up, and the queue sometimes starts on the northern side. So what have we done? A little thing. We have moved 60 of those buses in the mornings. Instead of going to Wynyard they go the Cahill Expressway, and they come into the city from the Macquarie Street end. It is such a little thing!" The 13 Dec 20012 brochure asserts: "These buses would terminate at Bridge Street." 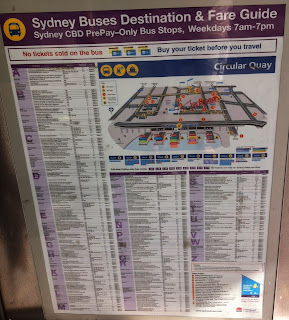 There are no active bus stops in Bridge Street and 6 months later there is no information at any of the bus stops at Circular Quay to say where they terminate. The dysfunction of TfNSW is terminal! The very helpful staff at the information booths and ticket-seller booths at Circular Quay have no information about the 60 buses. The Transport for NSW web sites have no information on these bus routes and the trip finder app does not find them at the relevant times. The trip finder finds the Metrobus no. 200 route from Bondi Junction to Chatswood Station via Ocean Street, New South Head Road, Macquarie Street, the Cahill Expressway and the Pacific Highway that was set up by the previous, competent State Government, but there is no trace of the bus services terminating at Bridge Street.

Chris Lock told the Randwick breakfast: "And everybody said 'This is going to be a nightmare. There will be uproar, be a disaster.'" So was everybody right, and was the first initiative of TfNSW quietly abandoned? It has not been possible to find out. Since Chris Lock's rock-star reception at the Randwick breakfast in April, he has become a total recluse.

In the 13 Dec 12 brochure the north of Harbour bus routes (the green arrow pointed at the Harbour Bridge) did not terminate at Bridge Street, despite what was said in the text, but appear to be sharing the Phillip Street terminus; with every other bus route in the CBD. This is, of course, not mathematically possible, but the Minister for Transport has been replying to all Questions in Parliament about the Light Rail Project that the brochure fully disclosed all the details.

The 9/11 13 brochure has a completely different picture of the bus routes. Buses from north of the Harbour do not terminate at Bridge Street but take over the Castlereagh Street south-bound-only bus routes.

There is of course an obvious problem: there is only one lane for north-bound buses between the David Jones store and the old Supreme Court building and there are at least two south-bound bus lanes.

When researchers set up bird hides, birds can be disturbed and leave their nests leaving the eggs to cool down and die, which is not what they want to observe. If more than one person enters the hide and not all leave, the birds are reassured and return to the nest. Birds cannot count to two.

O'Farrell must believe that all the residents of the Eastern Suburbs are birdbrained and would not notice the discrepancy. On the other hand it could be O'Farrell that is birdbrained. We will be finding this out at the next State Election.

It was assumed that O'Farrell would be using some of the Parramatta Road and City Road bus services to crush the Eastern Suburbs Public Bus services, but the number of north-of-the-Harbour bus services that can be routed along the north-bound Elizabeth Street bus lane is limitless.

So where will Oxford Street bus services be terminated when north-of -the-Harbour bus services take over Elizabeth Street? The Minister for Transport will be able to tell Parliament that the crude map in the brochure revealed all the details. The diagram shows a "planned city centre key bus corridor" along College Street between William and Oxford Streets. There is no possible explanation for this bus route other than to terminate buses by circling them round the southern half of Hyde Park. Bus passengers forced to disembark in College Street will complete their trips by catching a north-of-the-Harbour bus service in Elizabeth Street. Or they can catch a Victoria Road bus service to Town Hall and be herded onto a cattle car. The (indicative) bus stop precinct (the brown blob) stretches the whole width of the city, from Sussex Street to Hyde Park.

It is worth pointing out that without trams in George Street there are two route for buses from north-of-the-Harbour to return north, Clarence Street and the unused Kent Street, and the Eastern Suburbs bus services are unaffected. Also, less than half the "real estate" in Alfred Street is utilized, and any number of bus services from the north can be accommodated.

Chris Lock told the Randwick breakfast: "For the first time in a generation we are going to redesign the bus network... a century I hear from my right-hand" to guffaws from the burghers. In fact public transport has been using Circular Quay to turn vehicles around for more than two centuries; because it is a dead-end. There is no-where else in the CBD where buses can be turned around efficiently and without causing massive congestion in crucial arterial roads.

In order for the Transport Minister to be able to tell Parliament that it was fully disclosed that bus routes would be terminated in the middle of Hyde Park, without disclosing anything, Chris Lock's right-hand guys had to use only one of the different coloured textas they hold in their right hands when turning maps into creative masterpieces. I hope they were not traumatized.