The crunching of Cleveland Street 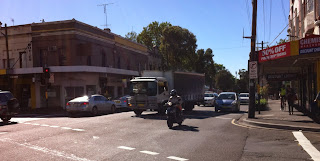 Cleveland Street is only four lanes wide and it is the main distributor for Surry Hills. During the morning peak, vehicles turning right from Cleveland into Crown typically stretch back past Bourke Street (which is one-way south) during each traffic-light phase. The photos above were taken around 8AM on a Friday. Through traffic and traffic turning left into Baptist Street is therefore restricted to one lane.
East-bound traffic in Cleveland Street is restricted to one lane by right-hand turning traffic into Elizabeth Street.

From the construction of Eddy Avenue at the start of the 20th century, Broadway has been the main artery for traffic heading for the Eastern Suburbs from the west, along Parramatta Road, and from the south-west, along City Road. It still is.

The last traffic flow data published by Transport for NSW is for 2005, but present traffic flows would not be less, and we will be making comparisons only. We will be using the data for Tuesdays as flows on Mondays and Fridays are sometimes not as typical for the other week days. We will use the data for vph from 8-9 AM as Transport for NSW is obsessed with this hour. The data is for eastbound traffic. The sample stations for Broadway are east of Harris Street (page 17, k5sy3a.doc) and west of Wattle Street (page 45, k5sy4.doc).

On the Tuesday of the sample week, 1908 vehicles passed Wattle Street in the allotted hour, and 2212 vehicles entered Railway Square - extra traffic had turned into Broadway from Harris Street. As pointed out previously this traffic has minor impacts on bus movements which pass from Broadway to Rawson Place in less than a minute, come what may. We do not know how many vehicles other than buses turned into George Street as the pneumatic tube data does not distinguish between vehicles, and George Street is a dead-end road north of Hay Street and of no interest to the RTA. Pitt Street north of Eddy Avenue is a dead-end road also. The number of vehicles other than buses that entered the CBD would be a very small proportion of the vehicles that bypassed the CBD tangentially. Skyhigh could provide this information precisely, if they were consulted. 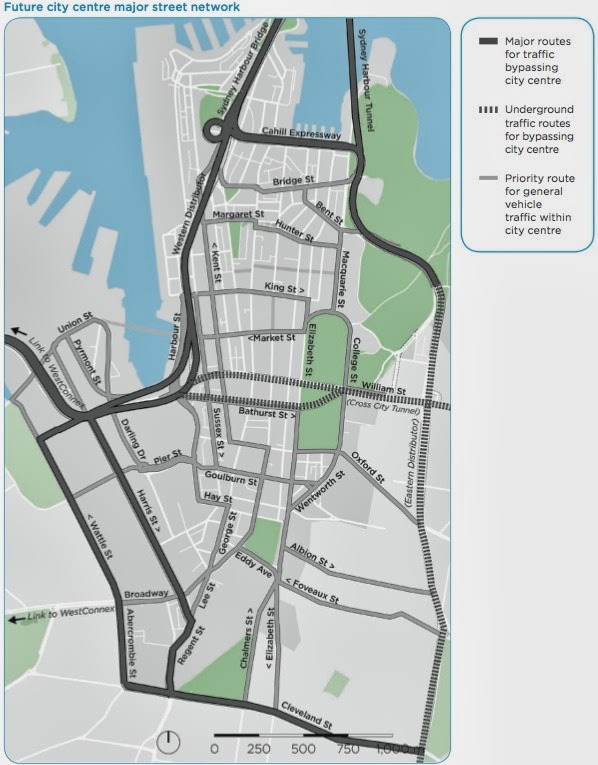 Transport for NSW is creating insuperable problems for east-west traffic movements. Their deliriously incompetent attempts to establish a bus/tram transfer stop in the critical section of Pitt Street between the historic Anglican Christ Church of St Laurence and the Central colonnade will gridlock traffic movements in Broadway. So they have come up with a solution: draw up a crude map that insists that Broadway is a priority route for general traffic movements within the city center, what ever that may mean, and redefine the Cleveland Street Distributor as The (as in the one the only) Major Route for traffic bypassing the city center.

Renaming existing institutions is TfNSW's modus operandi - Rail Corp and City Rail have become Sydney Trains and NSW TrainLink and a trip to Katoomba is an InterCity trip. Signs at train stations are wrong and covered up. But the redefining of Cleveland Street is much more sinister.

What will O'Farrell be doing? Will he be banning right-hand turns from Cleveland Street and forcing traffic to percolate into Surry Hills from South Dowling Street, say, by removing the blockages at either end of Arthur Street that were designed specifically to prevent this?
In fact, banning right-hand turns in Cleveland Street, Surry Hills, would not significantly increase the vehicle flow. When the connection was built from Wattle Street to Harris Street and thence to the Western Distributor and Eastern Australia from Kirribilli to Cape York, space was found for two right-hand turn lanes into Abercrombie Street. Cleveland Street, even reduced to one lane at Crown Street, can supply enough traffic for three lanes crossing Regent Street, and together with traffic from Botany Road, can fill the extensive right turn lanes into Abercrombie Street in most traffic light phases.

Traffic flow in Cleveland Street is consistently high throughout the day in the working week with small peaks in the mornings and evenings, when clearways are enforced.
Parramatta Road will be carrying more traffic when connected to  the WestConnex tunnel. For Transport for NSW to assert, without any analysis, that east-west traffic from Parramatta Road can be dog-legged into Cleveland Street is mind-numbingly irresponsible. Cleveland Street will never be able to cope with additional through traffic. TfNSW will be not only congesting east-west traffic movements, they will be congesting north-south movements, and making it a lot more difficult for businesses in Cleveland Street and Crown Street to survive.

The 9/11 13 brochure is insultingly titled "for further consultation". O'Farrell has the responsibility to force TfNSW to consult with the only authorities that have the data to definitely  establish this - the RTA and their consultants Skyhigh. O'Farrell will not allow his whims to be competently assessed, so what can one do?
Posted by Unknown at 16:50