Who pays for all this

The Armenian came down like a wolf on the fold
And her chariots were covered in bill-boards - pure gold.

apologies to Lord Byron
Can a private cattle car corporation make a profit running billboards through canyons of apartment buildings on top of sex shops and nothing-over-$2 stores? Previous public/private transport initiatives suggest not. The Monorail (nationalised and demolished), inner-west light rail (nationalised) and the Airport Link were able to set fares, subject to approval, to the stations that were set up, in competition with existing services. They struggled to make a profit. This established model for private/public transport projects does not auger well for student-concession holders at the University of NSW.

If any of the Cabinet Members of the O'Farrell government had done anything other than a mickey-mouse degree at a university they would be aware that students arrive for lectures at various times of the day. The number of bus drivers that need to be employed, and the amount of rolling stock in use, peak outside the 9 to 5 working hours, on the other hand. Bus drivers need to be rostered so that there are sufficient drivers available at peak hours, then there is a surfeit of drivers during the rest of the day. Granting university students travel concessions makes economic sense for public transport systems and has been a part of transport planning for aeons.

Using a tram-stop outside a university as the raison d'être for a crush-load transport system is shonky economics. Using event transportation is even shonkier. The university car-park next to NIDA at the time the satellite was passing overhead was all but empty. Theatrical sessions generally occur outside of peak hours, and patrons travel mainly by car or taxi as car parking is available.

The tram lines from Chalmers Street to Kingsford and Randwick are almost certainly the most expensive per kilometre in the history of human civilisation. It is impossible to deduce how a contract for a private/public partnership could be structured.

The Airport Link railway was a crucial piece of infrastructure, diverting trains around the recognised bottleneck where the Eastern Suburbs railway fed into the loop rail system in Erskineville, and it was completed in time for the 2000 Olympics. It received short shrift from the Carr government and the rail unions, and struggled to make a return to investors.

This light rail Project must rely on bus services being terminated by the government to force commuters onto the cattle-cars, or it must use road lane reductions, in the manner of the Cross-City Tunnel Project, to make rival public transport untenable. Investors in the Cross City Tunnel lost everything because while lane reductions may force some drivers to use the Tunnel during peak hours, the hostility generated ensures that they will not use the tunnel at other times.

The tram-lines along Anzac Parade will paralyse traffic in the bus lanes for 12 to 13 hours a day so the Project is off to a good start, but O'Farrell will still have to come up with contracts that ensure public bus services are terminated not for a while but forever.

It is claimed in the brochure Sydney's Light Rail Future that the tram Project will remove around 220 buses from entering the CBD in the busiest hour. Attempts to find out which bus services will be terminated are met with the response that the remodelling of the bus services is still being carried out by Transport for NSW. The Transport Minister is replying to all requests for information about the tram lines, that no information will available until the release of the Environmental Impact Statement, which is required by law. However an EIS does not require information on the economic viability of a project. So Transport for NSW will still be carrying out modelling of bus services for the foreseeable future and contracts to terminate bus services will no doubt be subject to commercial confidentiality.

All we can safely say is that all bus services that enter the CBD are under threat of termination and will be until the O'Farrell government chooses to make its decisions public. 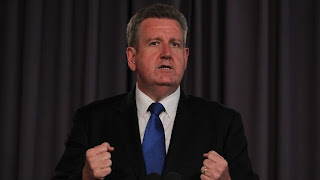 VE VILL DECIDE WHO VE TERMINATE AND VEN
Posted by Unknown at 21:42