The perils of one lane 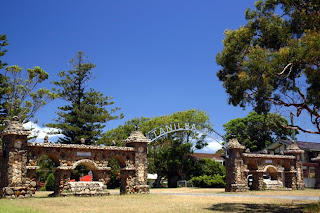 I was heading back to Sydney from Tanilba Bay on Port Stevens on the 29th of January 2008. Tanilba Bay was only accessible by boat when the holder of a land grant erected a grand colonial residence there in 1831, using convict labour. A developer had designed a model housing estate from 1931 with a road system inspired by Walter Burley Griffin and a wrought iron gateway possibly inspired by the (now) world heritage listed gate at Auschwitz. I did not see a bus the whole time I was there.

When we were approaching the edge of the escarpment where it falls down to the Hawkesbury River, traffic slowed to a crawl. At the bridge over the Hawkesbury, traffic was being diverted onto the old Pacific Highway steel-girder bridge. Some vehicles did not divert but they did not get far before being forced to divert on the other side of the river. Evidently the south-bound lanes of the freeway were closed, but the old Pacific Highway had carried all traffic from the north a few years before, why was traffic banked back past the Hawksbury River?

All became clear when we reached Hornsby. South-bound traffic was being diverted into George Street via Bridge Street, and Hornsby Council had reduced the southbound lanes to one, with a lane of long term local parking. The parking only extended for a block or so, but it was enough to delay traffic by seven hours, on a hot summers day. Millions would have been wiped off the Australian economy in lost productivity. The councillors would have celebrated their triumph.

The Iemma government spent millions building third lanes to the freeway carriageways, with plans to introduce one-lane against the flow traffic movements in emergencies. These plans failed when put to the test.

A cheaper alternative would have been to return emergency routes to the control of the Road and Traffic Authority. When Google Maps took its satellite snapshot of Hornsby roads the parking in George Street had been removed, so sanity may have prevailed in the end.