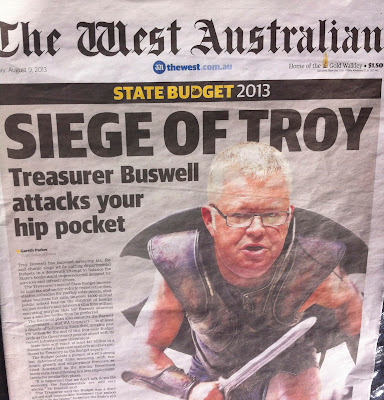 The Western Australian state debt was $3.6 billion a few weeks before the Liberal Party Barnett government took office four years ago. In the state budget handed down by the Treasurer, Troy Buswell, on Thursday, the debt is projected to reach $19.9 billion next year and surge past $28 billion at the end of the 4 year budget cycle. Then the debt will reach at least $47 billion in ten years time under the best-case scenario produced by Treasury. So what went wrong?

Premier Barnett promised during the last election campaign to build a Light Rail to the northern suburbs of Perth and a spur Rail to Perth Airport. During a previous election campaign he had promised to dam the Fitzroy River in the Kimberley and build a trench to pump water to Perth, but he had lost the election comprehensibly. Trams are electorally popular and he won the election in a landslide.
Now in the first budget after the election the electorate is counting the cost. The West Australian Newspaper, which has always supported the Liberal Party in elections, was scathing in its coverage of the Budget, using the digitally altered picture above on its front page. In its comments it says: The binge includes the airport rail spur and Max light rail system, projects whose benefits have never been publicly quantified nor the ongoing costs and funding adequately explained.

Less than a billion of the transport infrastructure is to be paid for in the four year budget cycle with the remaining $3.8 billion being foist on future governments. The WA government is more upfront than the NSW government as to who will be paying the interest on the debt:
The Perth light rail website floats the same ideas for funding the project as the NSW project - joint Commonwealth and State Government funding and public/private equity venture. There is a problem though. Tony Abbott has said categorically that a Liberal Party Federal Government will not provide any funding for urban rail projects.

At least Barnett had sounded out his federal Liberal Party colleagues before deciding to proceed. If O'Farrell does not want to hear something he suppresses the information and carries on.