"Things will get nasty in Anzac Parade, Forever." 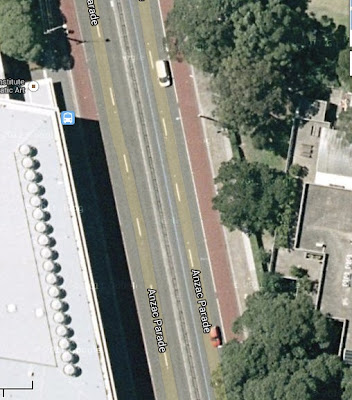 Thirty years ago Laurie Brereton announced a design for the Eastern Distributor that would have narrowed Flinders Street to one lane each way north of Albion Street, forcing all traffic from Oxford Street into the lane used by buses to the South Eastern Suburbs. I was able to access traffic flow data in the University of Sydney Engineering Library which showed that this would create congestion that would cripple bus services to the South Eastern Suburbs. Brereton appointed an expert panel that came up with the current design of the Eastern Distributor.

Now O'Farrell is going to reduce an entire section of a crucial arterial road to one lane each-way. It is beyond belief.

Thirty years ago the vehicle flow data was published in books that were too large to stand up on the shelves and were stacked up in quite a high pile. Now they are posted on line in very large MS Word documents on the Transport for NSW web site. You can use this link http://www.rta.nsw.gov.au/trafficinformation/downloads/aadtdata_dl1.html

The data was published every second year until 1993, then every third year until 2005, then unfortunately, zilch. The files of interest for Sydney roads are k5syaadt.xls which gives the weekly traffic flow data on surveys from 1989 to 2005, k5sya a Word doc with 215 pages that has data for monitor stations on main roads and k5sy4 a Word doc with 786 pages that has data for stations on other  roads. The monitor station we are most interested in is the station no. 12.012 an Anzac Parade north of Day Avenue. This is in file k5sya on page 30. This is the site of the tram-stop between NIDA and the University of NSW that forces all traffic not headed for Circular Quay into the one bus lane and establishes the business model for the privately-operated tramway. I have copied this page to Google docs, click here.
The main parking area for the University of NSW is between NIDA and Day Avenue, accessible only from Day Avenue. The tram stop will be about where the bus is.

Traffic flow data is collected for one week at each monitor station during the survey year, using mainly pneumatic tubes taped to the lane surfaces. After a week the equipment is moved to another station. The week chosen for the survey would vary from year to year. The weekly flows for this monitor station are consistent in the surveys from 1989 to 2005. So the current traffic flows certainly would not be less than in 2005.

Transport for NSW are obsessed with morning peaks in traffic headed to the city. So we will discuss the data for the north-bound lanes on Tuesday. Traffic flow peaks at 1660 vehicles per hour from 8am to 9am, then tails off in the next hour, but stays above 1100 vph for the rest of the day. Vehicle flows increase again after 1pm reaching another high peak of 1504 vehicles per hour from 5 to 6 pm. One would need the recent figures and the traffic-light timings to prove that Anzac Parade will be gridlocked when reduced to one lane, and only the Roads and Traffic Authority has this data. If O'Farrell refuses to allow the RTA to do traffic flow modelling around the tram routes then we are pretty well stymied. "Freedom of information" requests can not access modelling that does not exist. O'Farrell is good.

However the vehicles per hour figures are so far in excess of the maximum flows that can be achieved in a one lane each way highway with hook turns that one hardly needs to do the calculations. Both carriageways of Anzac Parade will be paralysed, not just in the morning and afternoon peaks but for 12 to 13 hours per day during week days, and for long periods at the weekends.

"Things will get nasty in Anzac Parade."
Not for a while, forever.