The power of pricing

The EIS for the Eastern Distributor left me deeply shocked - how could something so straightforward go so terribly wrong. All the objections I and others raised were upheld during the assessment process, so sanity prevailed in the end, but I resolved to look over other EISs in future.

The EIS for the Westlink M7 Motorway showed it extending from south of Liverpool all the way north to link up with the old freeway reserve south of Old Windsor Road. I pointed out that the toll booths for the Western M4 Motorway had been place to the east of Parramatta: "No power in the known universe can prevent motorists transferring to the Western M2 Motorway, travelling to the Prospect Highway for free and reaching the M2 Motorway in half the time".

I proposed that the cost of the project could be halved by having the Motorway make a bee-line to the Prospect Highway - to the east of Prospect Reservoir. The project went ahead as planned, but the toll for vehicles entering from south of the M4 is the same if they exit at the M4 or if they exit at the M2 - travel for the second half of the journey is for free. This was not presaged in the EIS. 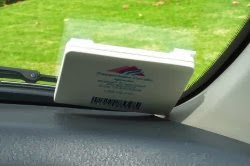 I had not taken into account the power of Radio Frequency IDentification (IFID) which had not yet been introduced into NSW. Vehicles can be identified when they enter a motorway and when they leave. There is no need for toll booths - customers have to open an account.

The missing link between Blacktown Road and the Prospect Highway has never been completed, which would be a contributing factor, however the Westlink motorway is one of the few PPPs that has not gone into receivership, so clearly the strategy has worked to some extent.

As a footnote, on page 140 of the mammoth 424 brochure, NSW Transport Masterplan final, it is stated: "An analysis of the options ... suggests that introduction of distance-base tolling on the Sydney motorway network offers the most benefits to NSW. It will encourage greater network efficiency by sending a consistent price signal to road users and has been used successfully around the world, including here on the M7".

It beggars belief that the Public Servants who churn out these brochures for the government could have no recollection of the compromises and decisions that were made to bring the City's existing infrastructure into being.

One thing that can be deduced for certain from this page is that tolls will be reintroduced on the M4 and introduced on the M5, so that residents of Western Sydney will bear the brunt of paying for infrastructure that is of little advantage to them and mainly benefits trucking companies who choose to bypass the truck/rail transfer station.