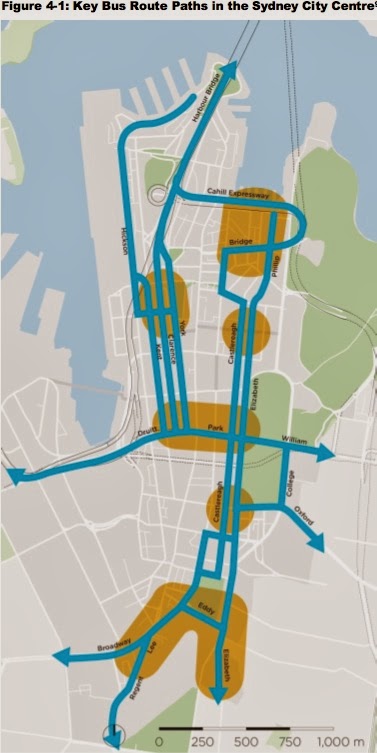 The children's pages in newspapers have puzzles where you are asked to spot differences in adjacent drawings. Given the penchant of TfNSW for infantile argumentation it is not surprising that they should produce an outstanding example of the genera.

The diagrams above are from the SCCAS brochure (9/11 2013), the EIS and the Sydney's Bus Future brochure (12/12 2013), in chronological order. The EIS diagram is the only one that does not have an arrow down Chalmers Street, against the flow. The Bus Future diagram has an arrow against the flow in Foveaux Street as well.

The most bizarre feature of the diagrams is the Phillip Street terminus - the only place in the CBD where buses can physically turn around, not obliterated by the George Street trams. The line simply stops at Alfred Street. Buses were expected, it appears, to back south along Phillip Street until they can back into Bridge Street and continue along Phillip Street driving forward. This was not corrected until 12/12/2013 when the Young Street loop was restored.

The O'Farrell government had very good reasons for being systemically deceptive about this bus terminus as we shall reveal.
Phillip Street is four lanes wide north of Bent Street as it passes the state government's Governor Macquarie and Governor Phillip office towers - it can never be widened. The parking under the Governor Phillip tower is accessed from a closed off Young Street. There are no vehicular destinations accessible from a right-hand turn from Phillip Street into Bridge Street other than the Cahill Expressway northbound. You can confirm this by dropping the little Street View figure in Bridge Street and scanning the facades of the Intercontinental Hotel and the Chief Secretary's Building.

Phillip Street northbound has three lanes south of Bent Street so right-turning traffic does not obstruct the bus lanes and can be used by all traffic originating south of Bent Street. So the sole purpose of the right-hand turn from Phillip Street into Bridge Street is to give the chauffeurs of the limousines of the Premier and his Cabinet, and the fat-cat Public Servants of the Premier's Department who park all day in the cavernous car park beneath the Governor Macquarie tower, the choice of using the Cahill Expressway to return home to the North Shore rather than turning left and using Grosvenor Street to reach the Harbour Bridge.

Traffic turning right at this intersection is extraordinarily disruptive to the Eastern Suburbs bus services.

The satellite snapshots of Google Earth are taken during holidays and the snapshot above shows two buses in the middle lane, which would be the preferred lane as it allows buses to leapfrog buses laying over in Phillip Street. When the Premier's chauffeur, or any other vehicle that chooses to take advantage of the Premier's special right-hand turn, is waiting for a gap in the southbound traffic in Phillip Street to make the turn, this lane is blocked. Buses are forced to use the kerbside lane, provided the driver put on his flicker soon enough, or wasn't followed by a straight-through vehicle that blocked the view of the rear lights. The taxi in the photo above has his flicker on - woe betide the vehicles behind him.

The Phillip Street/Young Street terminus operates with clockwise and anti-clockwise bus movements. Traffic turning right prevents buses entering the terminus two-by-two. The survival of this right-hand turn is testament to the arrogance and bloody-mindedness of fat-cat NSW Public Servants.

Now the Premier gets really nasty

The 13/12/2012 brochure announced that 60 buses from the Harbour Bridge had been diverted onto the Cahill Expressway in the mornings and would terminate at Bridge Street. This was reiterated by Chris Lock at the Randwick breakfast in April before he became a recluse. A year later, the 12/12/2013 brochure repeats the claim despite the trip finder and the information booths being unable to find these buses - I have given up looking for them. Now bus services from the North Shore diverted to the Cahill Expressway will not terminate at Bridge Street; they will "operate via Bridge Street, Castlereagh Street southbound and Elizabeth Street northbound".

All the figures above show the route. Now bus drivers on Eastern Suburbs routes will not only have to cope with Public Servant's limousines, and taxis, waiting for a gap in the southbound traffic to turn right they will have bendy buses from the North Shore Suburbs waiting for a gap!

Buses from the electorates of the Cabinet Ministers will not only congest the mother of all "pinch points" in Elizabeth Street northbound they will destroy the efficacy of the only remaining bus terminus in the CBD.