When the Castlereagh/Pitt Streets tram loop was inexplicably torn up along with the tram rails in George and Elizabeth Street, bus services from City Road took over the route, operating in reverse direction. The Pitt Street Mall required the city-bound route to be relocated: George Street was less congested than Elizabeth Street and there was more space for buses to lay over at Circular Quay.

Regardless of whether buses are forcibly terminated at Hay or Hunter Street every bus from Broadway must inexorably:

October 4, 2015 is the last time in the life of Sydney that a Parramatta Road or City Road bus will run on schedule.

Shortly before he became a total recluse Chris Lock told the Randwick "businessmen's" breakfast: "The light rail of itself  will take 220 buses out of the CBD".

He was reiterating the phrase that had appeared in the brochure Sydney's light rail future. The claim was chanted again in the EIS and was quoted in countless news stories in the Murdoch and Fairfax press and in radio and TV bulletins.

The Secretary who wrote the Final Secretary's Report  for the Department of Planning and Environment also stated baldly "The proposal would result in 220 fewer peak hour buses into the Sydney CBD".

All attempts to find out what was meant by "take 220 buses out of the CBD" including written requests from PUSH shortly after the Community Forum were thwarted by TfNSW. Chillingly, the consultants SAMSA Consulting commissioned by the Assessors at the Department of Planning & Environment to make an independant Peer Review of Traffic and Transport Assessment were not given any information as to what was meant.

The only bus services taken out of the CBD north of Market Street which is where congestion occurs by the light rail of itself  are the Flinders Street bus services through Kingsford and Randwick, not including the Metro routes. These can be tallied from the time tables and are a lot less than 220 in the peak hour.

SAMSA Consulting took the figures seriously and in Section 3.2.4 queried the claims about the capacity of the system. The derisive response of TfNSW was incomprehensible but they concluded by asserting: "Detailed demand and operational modelling has confirmed that the capacity of the CSELR is appropriate". ALSTOM later demanded that the vehicles be increased in length from 45 metres to 67 metres in order to meet day-one demand. 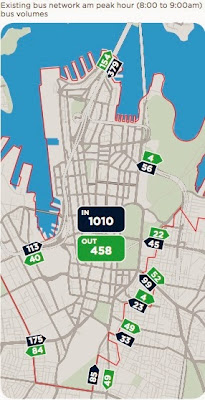 The modelling used to justify and promote the tram project was so infantile, so deceptive, so presumptuous and so destructive to public transport south of the Harbour as to be beyond belief.

The question arises: why Campbell Street? 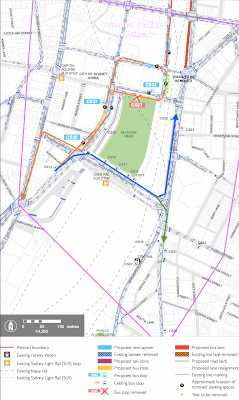 Don't you just hate it when dénouements give rise to more questions than they answer.

Campbell Street will be the most southerly east to west crossing of the "Berlin Wall" when Rawson Place is closed to vehicular traffic. It leads inexorably to Liverpool Street but movements can take place while trams are crossing Liverpool Street so it will be heavily used for east-west traffic. Druitt Street and Market Street are the only other places where Eastern Suburbs' traffic can cross into the western CBD.

To reach the southern arterial roads, Elizabeth Street and Botany Road, vehicles must turn into Pitt or Castlereagh Streets and percolate east along Campbell or Hay Street to Elizabeth Street. These roads will carry heavy traffic loadings if the traditional arterial road Rawson Place is closed.
In order to physically turn around bus drivers terminated "nearside" must turn across this traffic from a two lane road into a two-lane Campbell Street eastbound and make a further right-hand into Castlereagh Street. Bus drivers terminated at Hunter Street are no much better off, having to turn into Hay Street from Pitt Street. The question remains: Why?

The pedestrianisation of George Street makes the section of Park Street eastbound between Pitt and Castlereagh Streets a bus-only road. The only way a vehicle can reach here is from Pitt Street. This is purely a rat run for motorists trying to avoid crippling congestion in Eddy Avenue and Elizabeth Street south of Park Street. Private vehicles would presumably be proscribed from turning here and forced to join the queue of vehicles dog-legging from Bathust Street to William Street.

Buses looping here would not disrupt east-bound buses and would use a right-hand turn into Castlereagh Street used by Metro buses.

Allowing buses forcibly terminated at Hunter Street to turn into Eddy Avenue would give passengers a stop adjacent to Central Electric and solve the problem of turning into Hay Street.

So why is Baird wilfully and unnecessarily inflicting so much inconvenience and damage to the bus commuters of the inner west?

There is only one explanation. Baird's ideological imperative is to destroy the efficacy of the Public Transport system so as to force passengers onto a privately-operated tram consortium.

This was discussed in a post Tripping the Light Rail fantastic 1 March 2014. To get from say Sydney University or anywhere in the inner west to say Dover Heights or anywhere along New South Head Road passengers are expected to catch a bus to Belmore Park, a cattle car to Town Hall, a Walsh Bay bus or an Eastern Suburbs train to Edgecliff Station then transfer to another bus service - an expensive four separate trips.
Physically turning round buses not destined to pass through the mother-of-all pinch points in Elizabeth Street at Park Street would take the privately-owned cattle cars out of the equation. Oh no!

Go back from whence you came

SBS, please teach invaders correct English
Rawson Place has been the main arterial between Sydney docks at Darling Harbour and the southern arterial roads from the earliest days of the colony. A post Last Exit from Barangaroo (expurgated version) 17 October 2013 discussed the dire consequences of its closure to vehicular traffic. When the Hungry Mile had been the chief docks for NSW the connection between Sussex Street and George Street at Hay Street was the main exit from the docks. When Hay Street became one-way to install tram rails traffic from Sussex Street continued further south and could reach Rawson Place from Ultimo Road

The EIS maintained the connection of Ultimo Road and George Street south-bound although this was of dubious benefit with the closure of Rawson Place. When the project was in its final throes Parsons Brinckerhoff announced with yet another deliberately deceptive indicative-only figure that there would be no crossing of the tram tracks here - Goulburn Street would be the most southerly point at which traffic from Darling Harbour, Barangaroo and western CBD could access the southern arterial roads. Barangaroo and South Sydney around Green Park are slated to be the major areas for growth of residences and office space in central Sydney so the problems for bus drivers forced to physically turn around by looping into Campbell Street are going to get worse for the rest of the life of the city.

Parsons Brinckerhoff have decreed that the two lanes of traffic are now to be sent north to Bathurst Street before they can cross the tram tracks. The vehicles that travelled south along Sussex Street have been returned from whence they came - Baird has turned back the vehicles! They could have turned into Bathurst Street from Sussex Street and saved themselves a futile trip south.

Vehicles turning right from George Street into Bathurst Street require a separate phase to the phases for through traffic and the trams. George Street north of Liverpool Street is just a rat run for traffic wanting to avoid the paralytic congestion at the eastern end of Eddy Avenue.