Ms Berejiklian signed a contract within hours of the end of the short exhibition period for the third EIS for the CSELR project, before it had been assessed by Pru Goward's department. No details were released about the contract at the time. I wrote to the newly appointed Leader of the Opposition Luke Foley asking for the Labor Party to call for a Statutory Judicial inquiry into the letting of the contract but party strategists decided against making the tramway an election issue.

After closer examination of the issues by the new shadow minister for transport Ryan Park, Luke Foley came out strongly against the George Street trams. He said "The government would deliver a Berlin wall down the central spine of Sydney, dividing the city's CBD into east and west". He said "There will be a congestion nightmare permanently".

Extending Luke Foley's analogy further, the right-hand turn from Druitt Street into Clarence Street would be the Brandenburg Gate.

This was, in fact, one of the issues that I raised in my submission to the original EIS:

The Assessors at Planning and Infrastructure did not acknowledge that the objections had been raised and did not produce any rebuttal of the arguments. There were many objections that the Assessors did not deign to respond to.

Those who cannot remember the past are condemned to repeat it.

George Santayana
It is ironic that Constance was a member of the Joint Select Committee on the Cross City Tunnel set up by resolution of the Legislative Council on 16 Nov 2005. He appears to have forgotten everything that the inquiry determined. I have reproduced part of the Auditoe-General's Report on the project presented to Parliament in May 2006 to remind him of the salient findings.

The Cross City Tunnel was intended to reduce the number of vehicles crossing the CBD, presumably to allow public buses to traverse the CBD with less constriction. By the time it went to tender the Tunnel had been extended to exit into the portal of the  Kings Cross Tunnel. The project was put on display in a former hardware shop in William Street that had been aquired by the RTA for the Eastern distributor, adjacent to where the drop shaft for the tunnel drillers would be dug. I wondered why the westbound tunnel did not connect to the overpass giving access to Harris Street but the decision to add another lane to the overpass would have been made before the project went to tender.

The plan to extend the tunnels under the Kings Cross tunnel was submitted by the winning tenderer. I cannot recall if it was ever "exhibited".

I went on a bike ride to Brisbane just before the Tunnel opened and had to use the Harbour Bridge because of the construction and did not realise that this was to be permanent. The consortium had built a single lane tunnel from the west-bound tunnel, entrance in Paddington, exiting into Sir John Young Cresent and had a contract that prevented access to the Harbour Tunnel and the Cahill Expressway from Crown Street. Residents in Darlinghurst and Surry Hills were expected to drive south to Cleveland Street and pay the same toll as a motorist who had driven on the motorway from Milperra to access a Harbour crossing.

When the Harbour Bridge was built Park Street and William Street had been widened to carry vehicular traffic from York Street to the northern Eastern Suburbs. When the Cahill Expressway was opened general vehicles were eventually prevented from turning into Park Street from York Street forcing them to use the Expressway. Traffic headed for the Harbour Bridge from New South Head Road turned from a two-lane right-hand turn into Riley Street - there was never any charge for this turn. The cunning business plan was to prevent traffic turning from William Street from accessing the Harbour crossings - they would have to pay a tunnel toll. Darlinghurst and Surry Hills residents were collateral damage.

The turn from Druitt Street into Clarence Street could not be blocked since it provided a vital link to the northern CBD west of George Street. Vehicles wishing to avoid paying a Cross City Tunnel toll to access a Harbour crossing had two alternative routes:

Congestion at the pinch-points during peak periods would eventually force motorists to pay a toll to make a right-hand turn to the Harbour crossings but by this time the bus services through the CBD would be stuffed. The Cross City Tunnel had been promoted as improving the flow of buses through the CBD but it did the opposite - in the words of the CIA it was counter-productive.

Despite the Auditor-General's report to Parliament and a Joint Select Committee set up by the Upper House it was several years before a lane was built on the eastern side of the tunnel exit, connecting the round-about at the bottom of Crown Street to the Cahill Expressway and Harbour Tunnel. The consortium had filed for insolvency and the the new operators chose not sue for damages.

Many unhappy returns
The traffic lanes in William Street were reduced in a further attempt to force vehicles to pay the Cross City Tunnel toll. Traffic returning from the Harbour crossings exited into William Street as before but the lanes east of Palmer Street had also been reduced. When I returned from Brisbane, traffic trying to exit to William Street had banked back to west of the Art Gallery. I had ridden all day from Grafton and my legs had started to seize up - inching up the hill to William Street then up to Darlinghurst Road to cross the tunnel was not pleasant. To reach destinations in Surry Hills you have to back track along the bus routes in Oxford Street to turn left into the the grid. Traffic planners really have it in for Eastern Suburbs bus sevices. 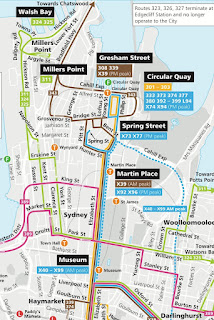 In a post on 11 Feb 2014 "Curiouser and Nastier" I attempted to deduce which bus services would be redirected to terminate in Walsh Bay. Buses from New South Head Road have for more than a century made a right-hand turn into Elizabeth Street and proceeded to Circular Quay giving access to Martin Place office buildings. The lane from Crown Street to the Harbour crossings has minimised the number of private vehicles making this turn.

Now Baird has confirmed that buses from William Street will be prevented from turning into Elizabeth Street from Park Street and forced to turn into the "Brandenburg Gateway", the most congested pinch-point in the CBD. Not all New South Head Road bus services will make it that far, some will be terminated above Edgecliffe Station.

North Shore rump politicians know that voters from these electorates will vote Liberal no matter what they do to them.
Posted by Unknown at 18:16