The alternative to drinking the $30 billion Kool-aid

The NSW government has been made aware that there is an alternative transport strategy for the Sydney CBD that does not:

The elements of the strategy have been outlined in posts on this blog and in this post the staging for implementing the strategy will be discussed.

Establish express AM services between Liverpool, Cabramatta, Bankstown, Dulwich Hill, Sydenham, Redfern and Central stations.
The tunnels of the Illawarra junction provide a connection between the Illawarra-Bankstown line and platforms 4-8 of Central station which have a third rail which was used to extract and turn round steam engines. This allows for an efficient turn back of trains which was developed for the Olympics but is not used to relieve pressure on peak services. The existing southmost freight rail on the Bankstown line provides the relief rail for express AM services. The express services would use existing rolling stock more efficiently.

Re-establish the connection between Bankstown and the inner-west line via Regents Park
This re-establishes the quick connection between the Bankstown line and the Northern line via Strathfield. Without this connection commuters are forced to change to a Harbour Bridge line train at Central station to reach destinations north of the Harbour. The Harbour Bridge line clearly has a fixed capacity that can be increased only at great expense.

Re-establish the connection between Cabramatta and Lidcombe via Regents Park

This is a temporary measure pending the completion of the Parramatta-Chatswood rail link in stage 2.

The costs are part of the roll-out of the Opal card which is already budgeted for.

Not all the competent engineers and planners that formerly worked for the RTA and the Transport Infrastructure Development Corporation would have resigned in dismay when North Shore rump politicians put incompetent planners in control of Transport for NSW. The descent into chaos has been so rapid. There would be competent planners shuffling paper clips round desk tops who can be reactivated to do the work.

Set up a Royal Commission into Transport for NSW


Complete the Up and Down Illawarra relief rail

The Illawarra relief rail line is twin tracks to the west of the four tracks of the Erskineville to Sydenham rail link. Preparatory work on the rails had been done when Ms Berejiklian brought the project to a halt. The line would allow express peak hour services from Liverpool, Bankstown, Cronulla, Woollongong and the south coast to by-pass stations from Sydenham to Redfern and Central among other things. These express services would run the pants off French single-deck trains that rely on herding passengers on and off more quickly for claimed increases in journey speed.

The underground platforms would be as close to the surface as possible for the turn-back rails under Belmore Park to pass under Eddy Avenue and for an eventual relief rail to pass under the Capitol Theatre roughly in parallel with the Eastern Suburbs rail tunnel. The alignment of the twin relief rails tunnel would continue under George Street which is more than broad enough south of Liverpool Street to accommodate four rails. 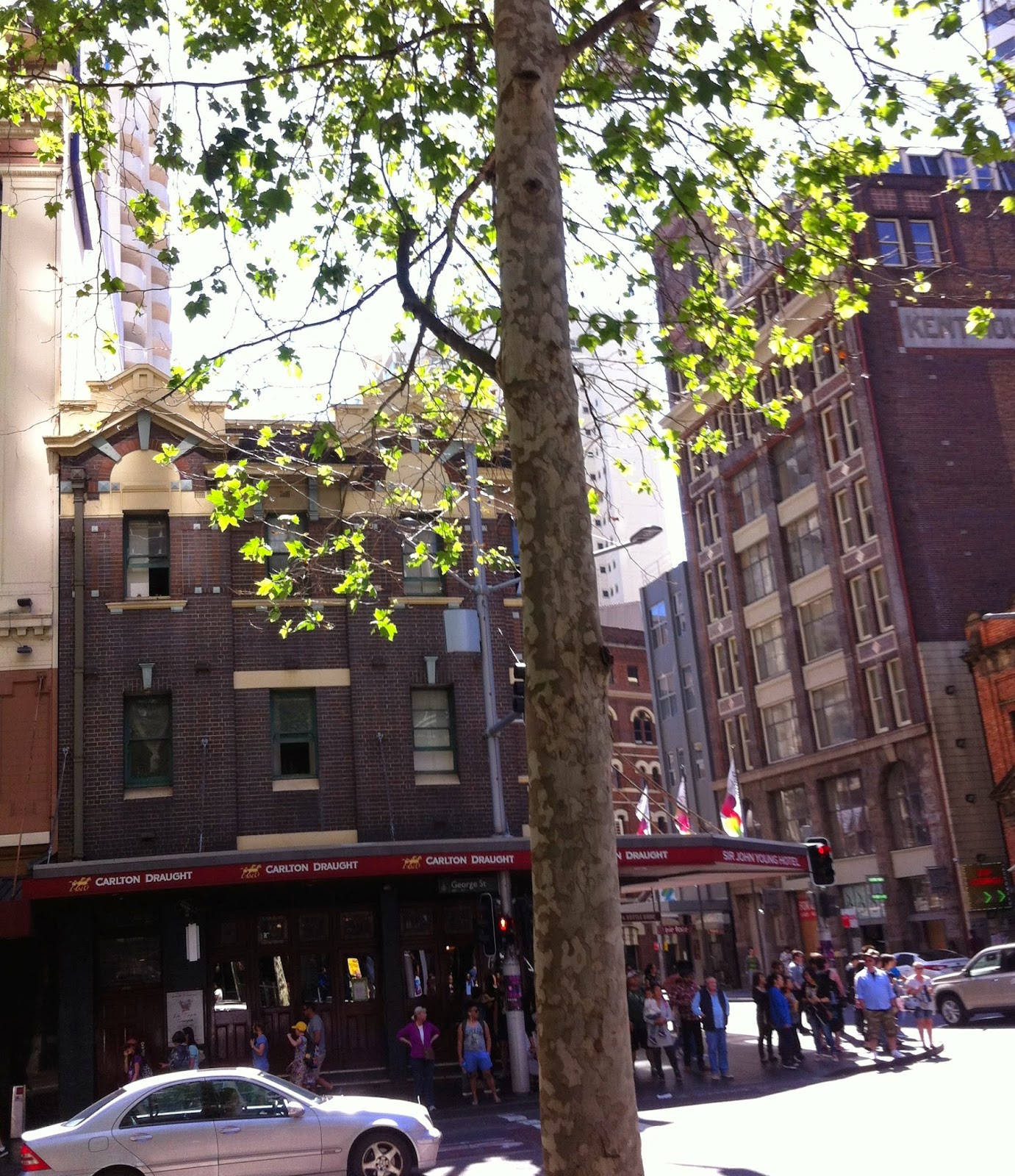 The relief rail tunnel would dogleg under the RSL Club in George Street and Kent house in Liverpool Street and continue a leisured ascent under the Kent Street alignment to Wynyard station. The Iemma government passed legislation to protect potential rail alignments under the CBD - a property developer wanting to establish a basement deeper than 2 metres along the alignment had to obtain permission from the Rail Authority. The Kent Street alignment would need to be protected ASAP after 28th March 2015.

The tram loop functions as it did for more than 50 years. Passengers alighting from trains terminating at Central station whether at a surface or underground platform walk across the Central concourse to catch the trams in complete safety and cover from the weather. The tram rails provide the third rail loop to the City Circle - not as fast between stops as City Circle trains as they have to deal with cross traffic controlled by SCATS (no priority) but there would be more stops (as many as the bus routes) and passengers do not have to ascend and descend to underground platforms.

Turn-back in the CBD

The obvious and least costly place in the CBD for turn-back to occur is under Belmore Park at Central station. For this to be feasible there must be a third rail loop to distribute passengers to destinations in the CBD north of Central. The George Street tram project was designed to obliterate all the places in the CBD where buses can physically turn around, crippling Parramatta and City Road public bus services among others. Modelling by consultants of TfNSW has conceded that it is not capable of distributing passengers from Central terminal to destinations in the CBD. The colonnade for the Pitt-Castlereagh Streets tram loop was built into the design of Central rail terminal and the loop fulfilled this function for more than 50 years. Restoration of the tram loop makes the Sydney CBD future proof, does not degrade any public bus or rail service and does not create grid-lock in vital arterial roads.