And then there were nine

At the beginning of May I attended a rally outside Parliament House. That's me holding the sign DANGER NEW TRAMS TOO BIG FOR CITY STREETS.

The yellow and black do-not-cross tape was unfurled to show the length of the proposed trams - it goes on and on. The rally was to support the successful motion of Penny Sharpe for the release of documents which was referred to in a post at the time. I mentioned to people at the rally that Ms Berejiklian had made some remarks offstage that the length of the trams could be increased from seven segments to nine segments. No-one believed that this could happen. The people at the rally from Kensington and Surry Hills were decent, community-minded individuals. They were unable to comprehend the evil that lurks in the hearts of North Shore politicians.

On Thursday 23 October 2014 Ms Berejiklian posted a media release announcing the selection of a preferred bidder for the project: 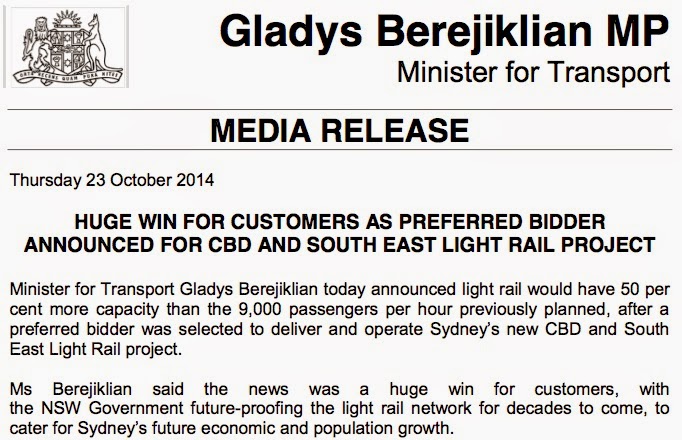 The announcement merely referred to a 50% increase in the alleged capacity of the system from the oft chanted 9,000 passengers per hour in each direction that TfNSW claimed could be delivered to Circular Quay. Since the wildly optimistic projections of consultants Booz & Company were that the sum total of people on board the trams at Circular Quay during the morning peak would be 764 with only 565 boarding during this period this claimed increase in capacity was inexplicable.

It was not until the following Monday that Ms Berejiklian fessed up that the trams would be increased in length to meet the demands of the preferred bidder, The Connecting Sydney consortium. There is no further information about the trams the consortium will import from overseas.

I had written to the Minister the day after the Community forum at Sydney High in April 2013 saying: "The carriages are the length of five buses. Running these behemoths through a shared pedestrian/cyclist precinct that runs at least 40% the length of George Street can only be described as insane. Running them past children's playing areas in Ward Park is even crazier. There is no precedent for such a system any where in the world. Only New South Wales produces politicians insane enough to even consider a project like this". You can read my letter here.

At the "Information Session" at Surry Hills I asked the tech guy what emergency braking system would be used by the trams only to be told that would be left to the Private Partner to decide and would depend on where the consortium chose to source the trams.

Needless to say, I raised objections to the total neglect for pedestrian safety from Crown Street to George Street in my submission to the EIS as well as objections to the shared bus/tram lanes at Fiveways intersection. I have archived my submission here. There were many other submissions to the EIS (20% of submissions) that raised these objections. The subverted public servants at Planning and (now) Environment acknowledged in the Assessment Report: "Public safety has been identified by the community as a key concern. The Applicant has recognised this and has provided an assessment of the safety for all road users including pedestrians, passengers, operators and the general public during both construction and operation phases".

In fact, the only response to the numerous objections about pedestrian safety in Surry Hills and Kingsford by the Department was to included a photoshopped revision of the notorious illustration of trams passing the Shakespeare Hotel in Devonshire Street without any commentary in the text. The Assessment Report went on to deal dismissively with concerns about safety in the pedestrian zones in George Street, Moore Park stop, Royal Randwick Racecourse stop and UNSW stops in section 5.2 Public Safety but there was nary a word about Surry Hills and Kingsford.

By increasing the length of the trams Baird will be blindsiding pedestrians at every crossing leading to and from Central Station far more comprehensively. This was 46,000 passengers in the 3.5 hour morning peak alone in 2011. With this many people the carnage in the killing field from Crown to George Street will be inexorable. The coupled juggernauts will be 18 segments long, posing far greater danger to residents at Northcott Place.

Baird's only reason for doing this is because corporations submitting proposals for owning and operating the trams believe (ludicrously) that this would be necessary for them to make a profit. If the best proposal was from Connecting Sydney corporation the other submissions must have been bizarre.