The Iemma government spent a very large amount of taxpayer's money designing a metro under the CBD and almost half a billion dollars on compulsory land acquisitions before the penny dropped and the Kenneally government worked out that a relief rail from Central to Wynyard was the only rail line under the CBD that actually reduced passenger pressure on City Circle rail services. Now Baird has abruptly announced that he will sell taxpayer assets to fund a rerouting of the tunnels northward from deep under Martin Place to even deeper under First Fleet Park to under the deepest part of Sydney Harbour and so deep under North Sydney there is lift only access to the surface then on to Chatswood, and southward from deep under Central station to Sydenham junction. This project has never been costed or had any design work done on it or as far as anyone can gather had never been assessed by anyone in Treasury or Transport for NSW when Baird made the announcement.

Needless to say, even the most cursory assessment would establish that the rerouting of the tunnels will cause an even more devastating degradation of public train services south of the Harbour than the George Street trams will have on bus services to the CBD.

No rational commuter from the northwest would stay on single-deck trains past Epping and get off at a platform god knows how deep under Central station in order to reach destinations along the Western line when they can transfer to an anti-clockwise Northern line train. The only people leaving the single-deck trains at Central would be from the Macquarie stations, who have no choice. The metro station at nominally Martin Place does not provide connections to anything that is not within walking distance of the station. We can deduce that in order for the single-deck trains to meet their claimed objective of transporting 40,000 passengers each hour during the AM peak through a Harbour rail tunnel close to 40,000 commuters each hour would have to leave trains at the one remaining station under Pitt Street between Park and Bathurst Street. 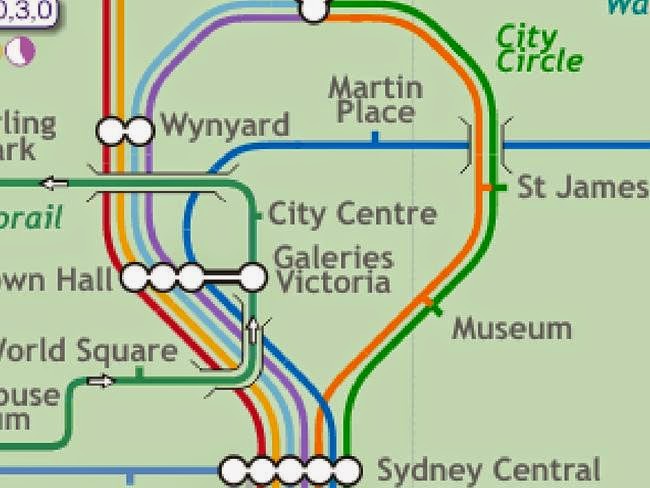 The stations of the City Circle are close together compared to tube loops in other cities because the lines feed into the same overpass over Eddy Avenue. The entrance to Town Hall station on the eastern side of George Street at Bathurst Street is a stones throw from the entrance to the pedestrian tunnel to Museum station on the western side of Elizabeth Street. The escalators to Museum station on the eastern side of Castlereagh Street at Park Street and to Town Hall station under the Galleries Victoria are a stones throw apart for people with very weak throwing arms. The escalators to the Pitt Street metro station are about the same position as the escalators under the Galleries Victoria (not shown in diagram above - replaced with a row of trees). Town Hall and Museum stations have between them eight platforms delivering passengers from all over Sydney to the Town Hall precinct. Sydney City needs two metro platforms delivering, we are told, almost 40,000 extra passengers per hour to the precinct like a hole in the bedrock.

To the barrier counts

Town Hall station is the busiest station in the suburban rail network in terms of the barrier counts of people leaving and entering the ticket barriers, which are collected every day. It is the most vulnerable point in the public rail system that commuters south of the Harbour rely on every day. The latest figures published (the City Rail Compendium archived by Google here) are for 2011. Patronage peaked before the GFC in 2008 but has been climbing back up so it is probably back up to close to the 2008 figures. More passengers would alight at Central to transfer to other train services without passing through the barriers and breaking their journey into an extra trip - Central is the busier station. The barrier counts at Town Hall do not record the numbers of passengers moving up the escalators to the concourse and down again to transfer from the Harbour Bridge rail services to the Eastern Suburbs line. They do not include the additional loadings that would take place from passengers transferring from a metro to a Harbour Bridge train at Chatswood to avoid breaking their journey to transfer to the Eastern Suburbs line.

In order for the Sydney Harbour rail tunnel to meet its proclaimed objective of transferring 40,000 passengers per hour under the Harbour during peak periods it would have to dump close to this number of passengers per hour into the Town Hall station precinct. These passengers have nowhere to go except to transfer to City Circle trains headed to the western and southern lines and for Redfern and stations north of Sydenham. The planned "Central" metro platforms were to be god knows how deep under Railway Square to the west of the Country rail platforms and do not provide a feasible connection to the Western and Southern suburban lines - transfers to the single City Circle line from Town Hall to Central stations are the only options for any of the 40,000 commuters per hour Baird asserts will have stayed on the metro beyond Epping and Chatswood stations.

This does not take into account the extra passengers using the escalators for internal transfers. To be fair we should give the hourly figures during the morning peak but the figures for the effects of a Harbour rail tunnel are so ridiculous it is hardly worth it:

Everyone who uses or passes though Town Hall station knows that the platforms and escalators are currently operating at close to their maximum capacity during peak periods. In the evenings the flows through the barriers are reversed for exits and entries.

And what about the northbound Harbour rail tunnel

The Harbour rail tunnel announced by Baird had only two objectives:
The northbound Harbour rail tunnel will, we are told, carry 40,000 passengers per hour under the Harbour. For this to happen 40,000 commuters each hour must decide to use the metro to reach destinations north or northwest of Epping rather than take the much shorter and faster route via Regents Park and Strathfield stations.

Rail tickets are effectively tap-on/tap-off so they provide crude origin destination data. We can gain a crude estimate of the maximum number of passengers that could possibly make the really dumb choice to use the metro to reach Epping station from the published data for 2010:
The data reveals the number of passengers exiting at stations along an entire rail line not at individual stations. The 199 passengers from the Bankstown line exiting along the Epping-Chatswood line (ECRL) would have no choice but to use the metro. The 1,738 passengers headed for the North Shore line stations (mainly North Sydney) would have to ditch the metro at Sydenham station unless they are headed to destinations within walking distance of lifts from "Victoria Cross" (a made-up location that exists only in the imaginations of TfNSW planners). We don't know how many of the 150 passengers who exit along the Northern line are headed to the north of Epping and might be silly enough to change from the metro at Epping rather than transfer at Strathfield but we can hazard a guess that this would be zero. Passengers headed for destinations from Chatswood to Hornsby must change from the metro at Chatswood or, you guessed it, Town Hall station.

All told, the number of passengers travelling through the northbound Harbour rail tunnel during the 3.5 hour AM peak each day will be little more than 200, well short of the 140,000 passengers the tunnel was designed to carry.

The original plan for a CBD metro (red line) was in a report by Ron Christie commissioned by the NSW government and delivered in 2001. Christie stipulated that a metro should be built only after heavy-rail lines compatible with the rest of the network (shown in black and blue) had been completed. The metro from the bus/Northern line interchange at Victoria Road in West Ryde to Maroubra was studied and named the Anzac line. In its final incarnation it would have used the abandoned central platforms and rail tunnel under Whitlam Square at St James station. This metro made a lot of sense. It was designed specifically to relieve rail passenger loadings on Strathfield station and on the bus services along Victoria Road.

The proposal was modified yet again to the "nominally Pitt Street" alignment that redirected the rails under Parramatta Road to Sydney University and potentially beyond - the route further west was never specified. It still made some sense but it proved to be horrendously expensive.

Now Baird, without any known further study or any disclosure of cost or indeed the feasibility of tunnelling under the deepest part of Sydney, has turned the "Pitt Street" alignment into the instrument for the destruction of the efficacy of the public rail system south of the Harbour.

The creep on a mission from God 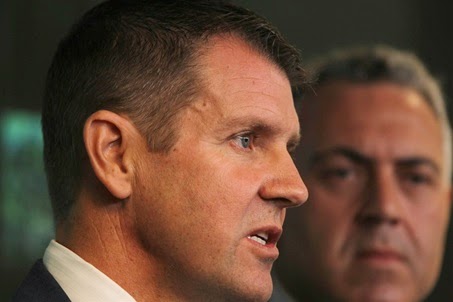 While still in opposition the North Shore rump of the Liberal Party hatched an undisclosed plan to destroy the efficacy of public transport south of the Harbour and to force passengers onto services operated by private companies. The modus operandi for achieving this objective was to replace the heads of the departments with ideologically-aligned public servants from outside the service and to not allow any disclosure of details of their agenda. These public servants continue to churn out "Rail/Bus Future" plans and "Fact sheets" that contain no plausible facts and make demonstrably-false assertions.

The Westminster system of government did not evolve with mechanisms for dealing with public servants that cover their incompetence with systemic dishonesty and lack of disclosure.

Only a Royal Commission with powers to compel testimony can uncover the facts about the events that led up to the project to tunnel from St Leonards station to Sydenham junction at any cost.