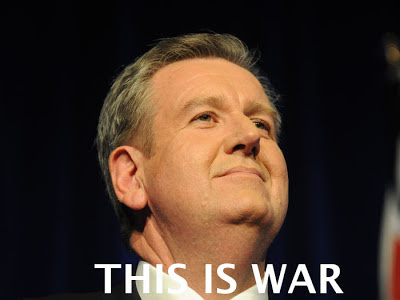 O'Farrell campaigned at the state election with a promise to assess the possibilities for Light Rail in Sydney. The photo above was taken by the ABC when his electoral victory was declared. On assuming power, after 17 years in the political wilderness, he did the opposite. He methodically subverted the NSW Public Service.

He set up two new government departments that had not existed before and gave them the authority to ride roughshod over the traditional Public Service departments. The two departments were Transport for New South Wales (TfNSW) which would develop an existing rejected design, and Infrastructure New South Wales which would approve the Environmental Impact Statement. The Roads and Traffic Authority would not be allowed to do modelling of the traffic flows around the tram stops and the impacts on traffic arteries and adjacent roads, using its formidable data bases and mathematical expertise. And so, between the two of them, the new departments would, as the saying goes, lick the arse crack clean.

There was a problem though. Infrastructure NSW made an informed assessment of the Project and gave a damning rejection of the underlying assumptions. The comment in the side bar is one of the least damning comments that were made. And so, O'Farrell announced the mass resignation of the inaugural chairman Nick Greiner, a former Liberal Premier, and the chief executive Paul Broad of Infrastructure NSW on May 23. Greiner was replaced as chairman by a Liberal Party henchman, the former Business Council of Australia chief Graham Bradley yesterday, and TfNSW appear to have no qualms about ever having to justify the infantile modelling which is being reiterated in the Wikipedia article.

Wikipedia is a not-for-profit altruistic organisation that relies on donations from the public to offer free access to reliable information and it is sad that a Government department should employ people to subvert the editing process. TfNSW is devoid of any ethical compass. Gareth and WWGB have their identities protected by Wikipedia but it is clear that they are embedded with TfNSW and have a day job there. While the name of the Surry Hills dot is being repressed the three roughly equally spaced dots in Anzac Parade have now been given names.
Posted by Unknown at 22:02