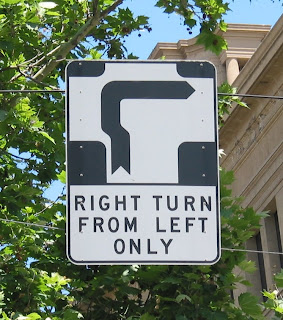 People ask if trams are so great why were they removed from road systems throughout Australia, and burned in a bonfire of vanities in Sydney, in the 1950s? There is a short sharp answer to this: the hook turn.

Tram lines require vehicles to make right hand turns from the kerb side lane. The screen shot above shows vehicles making a hook right-hand turn in the Melbourne CBD. There are 25 intersections in the Melbourne CBD where hook turns are necessary - they are listed at this web site gps-data-team.info. The intersection of Elizabeth Street and Lonsdale Street had a hook turn in progress as the satellite was passing overhead so it will be used to demonstrate the principles of the turn. Traffic turning left or right share the kerbside lane. The main streets are so wide in the Melbourne CBD that up to three vehicles can wait to make a right turn without blocking traffic making a left turn in concert with the straight through traffic. The Road Rules of Australia require right turning traffic to wait for the cross street traffic lights to turn green before completing their turn - the cross-street traffic will wait for them to make their turn before setting off. If there are more than three vehicles wanting to turn right during a traffic light phase they must wait behind the pedestrian crossing until the next phase, blocking left and right turning vehicles alike.

If straight-through traffic was also blocked this could lead to grid-lock. However there are further Road Rules to minimise the likelihood of this happening. Drivers are proscribed from driving past the back of a tram that is stopped at a tram stop, so passengers typically disembark and embark from trams onto the road tarmac, and vehicles can swerve onto the tracks so long as they do not queue in tram lanes at intersections.

The Australian Road Rules basically assume that there will be only two or three vehicle wanting to make a right-hand turn in each direction during each traffic-light phase. The Melbourne road system achieves this by directing most vehicular north-south traffic in the CBD into King Street which has no hook turns. Arterial roads such as St Kilda Road, which has tram lines along the centre, has a minimum of two lanes in each direction and has no hook turns. The Road Rules of Australia were not designed to cope with tram lines down the centre of a crucial arterial road.