The Oyster Card and Victoria Road

As was discussed in the post on 25 February 2014 The world is your Oyster Card Sydney was on the brink of becoming a future-proof world city when the previous state government selected the Pearl Consortium as the preferred tenderer for a smart card public transport ticketing. The Oyster card allowed commuters to change destinations freely at shared bus stops regardless of what destination was on the front of the bus that passed through their pick-up stop. Unlike the Broadway bus services there would be no need to introduce a financial incentive to change destinations for the Victoria Road bus services. 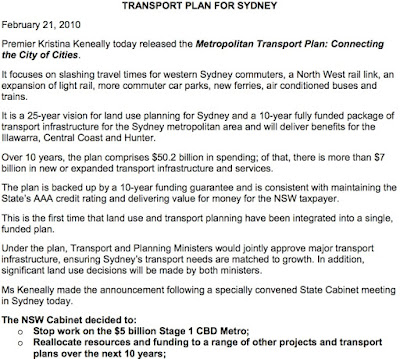 The Oyster Card was not the only thing gifted to the incoming government. When the Rozelle to CBD Metro was abandoned because of the escalating cost Premier Keneally announced a transport plan for Sydney which included relief rail tracks for the western line and a tramway to Barangaroo from tracks past Paddies Market. Barangaroo would also be connected to Wynyard station via the tunnel under Kent Street. Wynyard station was physically located under York Street with the main exits to the bus stops at Wynyard park but there were exits to the west to Clarence Street and under Kent Street. 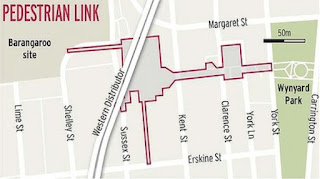 In December 2010 cabinet agreed to spend $286 million on the pedestrian link from Wynyard station to Barangaroo via an overpass over Sussex Street. Lend Lease was not required to provide funding although its office towers would be the main beneficiaries of the project. 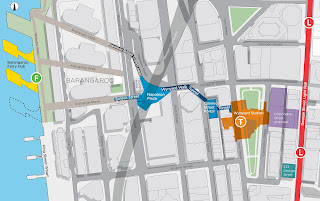 Lend Lease subsequently agreed to build a further overpass at Napoleon Street and the O'Farrell government decided to build a wider tunnel under Kent Street. Lend Lease has completed construction of the overpass and its office towers appear to be ready for letting but, five years on, the Clarence Street portal to Wynyard station is a construction site and the Kent Street pedestrian tunnel is a "deep excavation".

The relevence of the Kent Street pedestrian tunnel to resolving congestion in bus routes in the CBD is that it opens up a fourth destination for bus services from Parramatta Road, City Road and Victoria Road. Currently (before 4 October 2015), all these bus services have used George Street north-bound to reach Circular Quay where they can physically turn round. 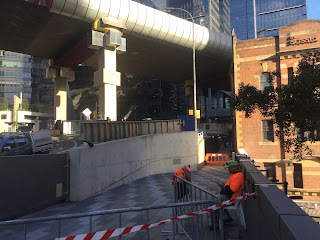 The Kent Street pedestrian tunnel delivers large volumes of passengers to potential bus stops on the western side of Kent Street at "Napoleon Place". Buses from Victoria Road would enter the CBD from the Western Distributor at the Bathurst Street off-ramp and travel along Kent Street before turning down Napoleon Road to turn into Sussex Street/Hickson Road ending at a terminus at Walsh Bay. The outbound route would be back along Hickson Road/Sussex Street to the on-ramp at Market Street; a fast and efficient route.
Buses from Parramatta Road and City Road would access the Kent Street bus stops from Liverpool Street, avoiding the recently created (against my fervent objections) pinch point at the George Street cinemas and the congested turns from Druitt Street. They would continue along Kent Street to the existing bus layover at Argyle Park.

The only way to releave this congestion is to divert some of the buses to alternative routes. George Street has been the main axis for bus routes to the west of the CBD from the foundation of the colony and must remain so.

The brochure Sydney's light rail future blithely opined that "Elizabeth Street will be the main north-south bus route" and this was chanted by Chris Lock at public meetings before he became a total recluse. In fact the pinch point at the Old Supreme Court Building has benn recognised as the major congestion problem for CBD transport for more than 200 years and the greatest minds of the 19th and 20th centuries have sought to minimise the congestion. The assertion that traffic flow can be increased by painting red lines between traffic lanes and that buses from all the routes that use George Street, as well as routes from the Harbour Bridge, can be diverted into Elizabeth Street northbound is so preposterous it brings into question the sanity of the public servants involved.