The Sydney Harbour Tunnel added four traffic lanes to the Harbour crossings but the train rails across the Harbour Bridge, one each way, have remained the same. The original Bradfield plans were for the Bridge to be symmetrical with train rails on each side but the eastern lines were adapted to carry trams that terminated in a tunnel to Wynyard station. When the trams were scrapped the lanes were converted to general traffic. There are no lack of lanes for buses to cross the Harbour Bridge; the problem is just getting them into the CBD. This prompted Greiner's Infrastructure NSW to propose a bus tunnel.

The December 2012 brochure heaped scorn on Infrastructure NSW's proposal but it is only after Ms Berejiklian signed a contract in the dead of night and construction has commenced that the alternative has been revealed; it is so preposterous as to be beyond belief. 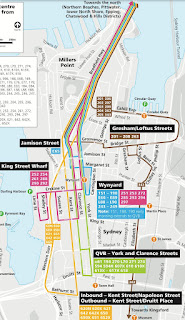 The only method proposed by TfNSW for reducing the congestion in York Streer that had Chris Lock quivering with indignation at the self-proclaimed Businessmen's Breakfast in Randwick, apart from looping buses to a stop in Bathurst Street, is to loop buses clockwise across the Cahill Expressway, dump passengers in the middle of Bridge Street and return the buses immediately to the Harbour Bridge via Grosvenor Street.

This is far from helpful as the buses must cross the incoming lanes into York Street; a movement so damaging to the ingress of buses into York Street in the AM peak that it has been blocked by movable barriers for æons. One shudders to think what is going on at this intersection post 4 October 2015.

It isn't just the bus services along Miller Street that TfNSW are directing at the physical barriers at the intersection of York and Grosvenor Streets. The long term goal of TfNSW is to funnel buses from the North Shore into Castlereagh Street. This has been revealed in figures in the EIS and subsequent brochures as discussed in the post Spot the Difference 2 Feb 2014.

The only route back to the North Shore is through the mother-of-all pinch points in Elizabeth Street north-bound then bound for the Grosvenor/York Streets intersection. The only service TfNSW has been game to direct south from the Harbour Bridge for the present is an extension to Chatswood of the doomed 343 service along Gardeners Road to the Nine-ways intersection. This travels along Elizabeth Street southbound.

The routes from the North Shore to Castlereagh Street have been completely concealed. Baird is unwilling to reveal the ferocity of the planned assault of the North Shore politicians on the residents of Malcolm Turnbull's electorate. 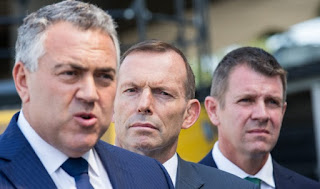 It should be pointed out that Eastern Suburbs residents are just collateral damage as far as North Shore politicians are concerned. Elizabeth Street has provided access to the CBD for these suburbs from the foundation of the colony.

North Shore politicians have regarded the people living outside the North Shore as prey; only fit to provide funding for infrastructure projects that benefit only the North Shore. The bucket-list of projects for the North Shore keeps growing: the NorthShoreconnex road tunnels; the Chatswood to Sydenham rail tunnel; the Northern Beaches busway, requiring the duplicating of the Spit Bridge, and a helicopter pad at that Man O'War Steps so Bronwyn Bishop can travel to the opera in the style to which she is entitled.

Australia is a poor country. We cannot afford the escalating demands of the North Shore politicians.