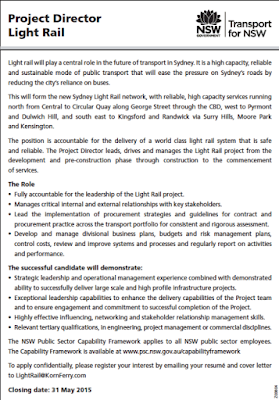 A couple of weeks before Mike Baird became Premier ads appeared in newspapers asking for applications from qualified persons to apply for positions in the NSW Public Service. The ads defined the role of a public servant to give the minister for planning and infrastructure unbiased advice and said the recruitment drive was to deal with the large number of coal mining applications needing to be assessed. The ads were never proceeded with.

The ads for Project Director Light Rail make it clear the applicants will not have leave to give any independent advice. The light rail is described as high capacity, reliable and sustainable but it is not clear what is being sustained. The position "is accountable for the delivery of a world class light rail that is safe and reliable". Public Servants can not be sued for fatalities and injuries that are the result of incompetence so the successful applicant has nothing to fear.

I was told by the tech guy at the Surry Hills information session that the successful consortium bidding for the contract would be required to present an audit of the safety provisions before construction commenced. Clearly this has not occurred. ALSTOM is the only member of the ALTRAC consortium with assets sufficient for them to be sued, so ultimately they will be held accountable.

Chris Lock was stood down abruptly from his position as Deputy Director General of the Transport Projects division of TfNSW in April after a 10 year career. He appeared with Ms Berejiklian at the Sydney High "community forum" where he was howled down. He got a better reception later that week at a Randwick Businessman's breakfast but became a total recluse when people including myself pointed out the obvious flaws in his arguments. He continued to "work" full time on the project using complete lack of disclosure and deliberately contradictory information from the consultants to the EIS to avoid scrutiny. 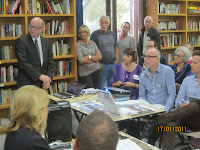 "Pizza boy" Jeff Goodling has also been stood down. He explained a great length that he could not answer any technical questions about the light rail: his role was to "deliver the Project". I confronted him about the deliberate contradictions in the consultants descriptions in the EIS. He said these should be pointed out in submissions so they could be dealt with. In fact the consultants continued to produce contradictions up to the signing of the contract by Altrac.

The new Minister for Transport, facing the annihilation of his political ambitions, does not care what qualifications the naxt head of the department has on his CV. He is looking for a Public Servant with political skills to deal with "stake-holders" and hopefully con the general public. There will be no shortage of applicants seeking a position that has taxpayer-funded superannuation for life.