The original plans for a CBD metro from Rozelle had a stop to the north of Wynyard station. It would have been so far under sea level the only access to the surface would have been by lifts and there was no indication of where the lifts would have been located. Rod Staples is a new breed of public servant with little but contempt for the public. They could at least conjecture that some passengers of buses that are terminated at Wynyard Park might have found their way a couple of blocks north and got on a metro train rather than flood onto the City Circle trains. "That was a bloody stupid idea" commented Kristina Keneally after she had cancelled the project.

Rod Staple's plans for the North Shore rump politicians do not hold out any hope for diverting bus passengers disembarking at Wynyard park away from the CBD loop trains. The metro begins its precipitous decent to pass under the deepest part of the Harbour after crossing over the Cross City under Park Street, if indeed this is possible - it is yet to be confirmed.

Now, on 23 June 2015, Mike Baird and his new Minister for Transport  and Infrastructure Constance announced revised plans for the alignment of the bottom-of-the-Harbour metro.

This metro project is progressing in the same manner as the NorthShoreConnex road tunnels with infantile CGI generated videos released, which contain no plausible information. The diagram left was produced by the SMH trying to make sense of the announcement. The announcement was that the underground station was "expected to be located at Central Barangaroo" and "a working party will be formed" to consider "the optimal scale of Central Barangaroo in the light of the increased transport capability".

The video released with the announcement was a reworking of the original video implausibly showing separate tunnels on top of one another passing under the deepest part of the Harbour. The video continued to refer to stations at Martin Place and Pitt Street prompting the graphic artists at SMH to show violent dog-legs to Castlereagh Street and back to Pitt Street.

The waters of Darling Harbour lapped against the cliff to the west of Kent Street. Convict labour built the Argyle cut to link the wharves at Millers Point and Walsh Bay to George Street. There was no road at the foot of the cliffs and Darling Harbour which was deep enough to take the largest ships of the time. Central Barangaroo is a concrete slab constructed over the Harbour in order stack containers before the container wharves were built in Botany Bay. The original plan for a metro station at Barangaroo placed the platforms to the east of the escarpment spanning up to a block north of Wynyard Station. It was never disclosed how deeply underground it would have been or how passengers would have reached the surface.

When Paul Keating took control of the planning at Barangaroo he insisted on chipping away the concrete slab to roughly resemble the original shape of Millers Point. Christina Kennelly as Planning Minister called for submissions for landscaping the slab and the new government dared not alter the plans. The Barangaroo Authority released a YouTube video of time-lapse images of the transformation of the slab on 27 July 2015. I have downloaded a link in an accompanying post. Hickson Road and a boardwalk are the only part of the slab to remain at the base of the escarpment west of High Street and its heritage listed terraces.

A underground subway station "expected to be located at Central Barangaroo" would have to remain deeply under the floor of the Harbour after passing under the deepest part of the Harbour. So what would this cost?

The underground station at Edinburgh Airport had been costed at half a billion pounds in 2006, because of the necessary provisions for fire emergencies and the need to facilitate evacuations - this was a year after the terrorist bombings in London. The plumetting Au$ makes it difficult to make conversions. No-one has built an underwater subway station anywhere in the world so it is impossible to estimated what it would cost to build one. Baird has set aside $84 million in the State Budget to supposedly find out. 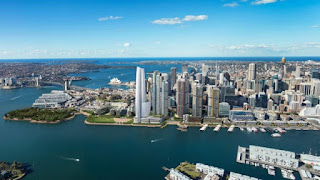 Baird changed the plan at Barangaroo to give Packer absolute waterfront land at the southern end of Central Barangaroo without competative tendering and without disclosure of the terms of the contract. The announcement of a subway station can best be seen as a ploy to do the same to the remaining waterfront land at Central Barangaroo. It is not the developers that will meet cost of building a subway under the Harbour, whatever it would cost.

The coup de gråce for rail services south of the Harbour

One of the first acts of the Liberal Party government was to commission a "pre-feasability study" into Bus Rapid Transport from the Northern Beaches which was published in June 2012. None of the options short-listed came close to being economically viable. 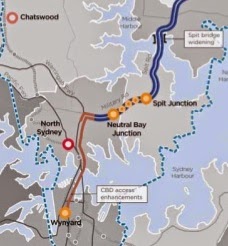 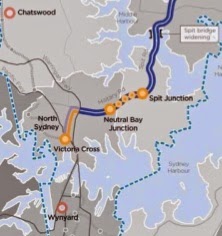 Baird announced before the election that his government would fund a feasability study into a bus rapid transport corridor, which would reach the same conclusions, but would be required in order to declare the scheme a State Significant Major Project. The project required doubling the capacity of the Spit Bridge but it was never specified how this would be done. The pre-feasability study considered terminating the buses at Wynyard Park, as at present, or at the mysterious Victoria Cross, shown as adjacent to North Sydney and accessed via Falcon Street. The dot representing Victoria Cross has now drifted further north in TfNSW videos and crude maps but no-one knows where. So the terminus will be Wynyard Park. 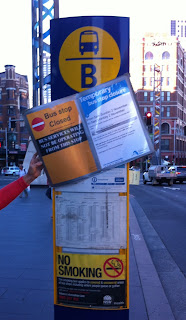 In fact Northern Beaches bus services were stopped from accessing the traditional terminus at Lee Street at the beginning of November 2014. Passengers were forced to catch a George Street bus to reach the new terminus at Wynyard park. North Shore politicians truly believe they can do what they like with voters from the Northern Beaches.

Hills Buses will also be effectively terminated at Wynyard Park. This has not been formally announced but has been indicated in the "City Centre bus network map" detailing routes that will be implimented when George Street is closed for traffic. Baird will insist that there will be temporary pain before the trams run, but it will become progressively worse for the rest of the life of the City. 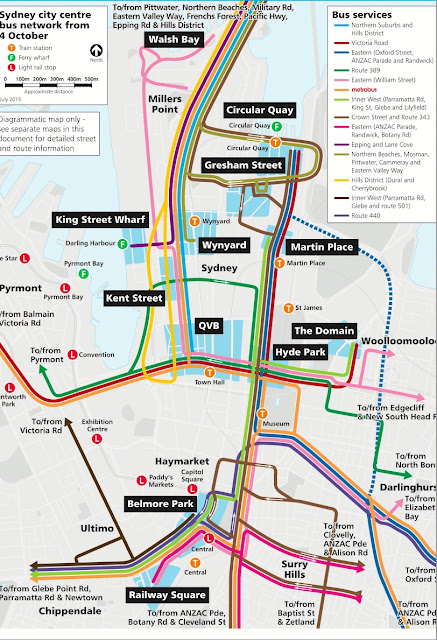 The route map shows Hills buses terminating at Druitt Street while buses from Pyrmont are sent north to King Street where they pass through the mother of all pinch points along with every bus from George Street and every bus from Oxford Street and Flinders Street. Will buses be forced to riffle-shuffle with private vehicles through the pinch point? The only buses that will be using the vast layovers at the Lee Street terminus when buses are forcibly terminated at Randwick and Kingsford are minor routes to Elizabeth Bay.

Unmanageable congestion in Elizabeth Street and Druitt Street will immediately force a revision of these bus routes.

Whether Hills buses terminate at Druitt Street or Wynyard park passengers will quickly realise that their best chance to transfer to a train or a Parramatta/City road bus will be to flood onto a City Circle train at Wynyard.

Preventing bus services from the Hills suburbs, the North Shore and the Northern Beaches from reaching Railway Square for the first time in the history of the City, except through the Elizabeth Street pinch point, will create overloading of the City Circle at its most critical point (Town Hall Station). The George Street trams will do nothing to relieve this congestion - the stops are too remote and inconvenient and the service cannot compete with the tube trains.

The localised overloading of the City Circle will cripple all the rail services south of the Harbour.