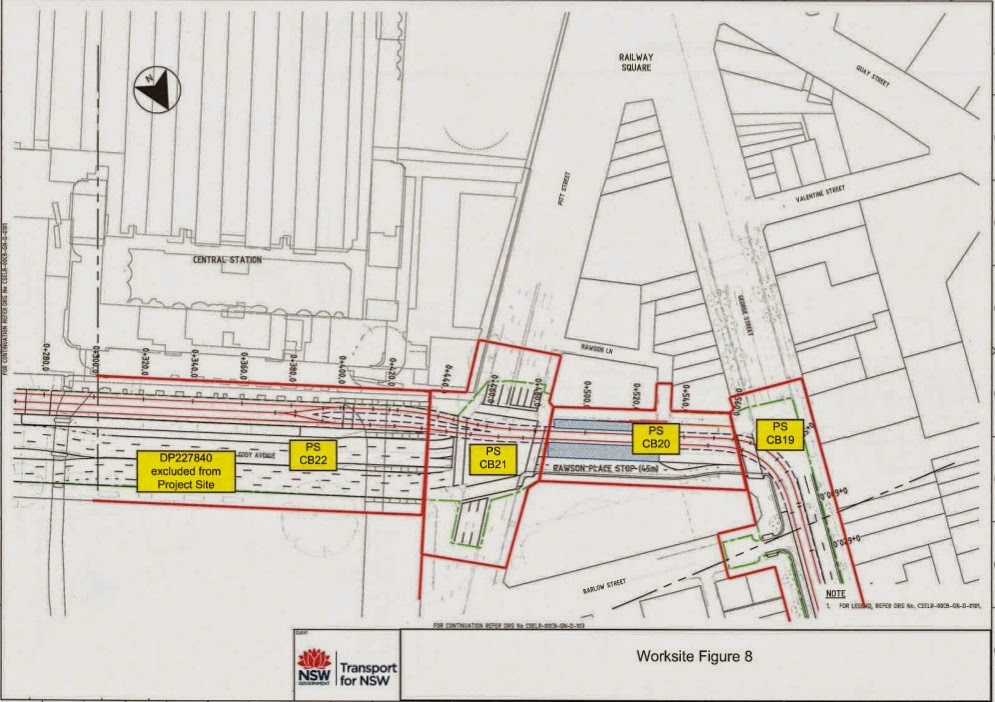 Bus passengers terminated in Pitt Street will be forced off the bus a considerable distance south of Rawson Place and be expected to walk around the corner to catch a tram along George Street which has stops only at destinations accessed by the City Circle trains. Trains do not kill and maim pedestrians so they are much more reliable. TfNSW asserts that only 50% of Parramatta Road and City Road buses will be terminated in Pitt Street so most passengers will chose the other option of getting off in Druitt Street and transferring to the numerous City Circle trains.
Bus passengers silly enough to choose the tram option will face a bleak future. Buses that discharge passengers at Pitt Street are forced to carry on empty to turn right into Campbell (or according to the EIS Goulburn Street?) then right again into Castlereagh Street and back to Pitt Street. They then have to make a fifth right hand turn into Rawson Place make a set down only stop then make the hairpin turn of death into George Street in order to pick up passengers on the east side of George Street. In order to physically turn around they are forced to cross the tram rails five times.

It is on the return journey where bus passengers have a high probability of becoming the pedestrian that brings the privately-owned George Street transport monopoly to a halt for an indefinite period. The trams discharge passengers on the northern platform in Rawson Place and they have to cross the tram tracks in order to catch a bus in George Street. If they obey the rules and move along the platform to the tarmac-level signal-controlled pedestrian crossing they are caught in the pincer movement between the undefined tram alignment and the buses making the hairpin left turn. The pressure of people behind them trying to avoid being run down by a bus will force pedestrians into the path of trams approaching from behind them with priority signalling.

Tram passengers who wait for the tram to pull out on alighting then walk behind it illegally are only marginally better off. It is physically impossible for them to see a tram with priority-signalling approaching from the arches. There is a continuous killing field from Crown Street to George Street but it is most murderous at George Street. It is the Australian taxpayer that will be paying them a disability pension for the rest of their lives if Baird's North Shore federal colleagues have not cut these back. The profits from the trams will be going to Canadian Pension Funds, we are told.

The Final Secretary's Environmental Assessment Report which was the instrument for recommending conditions of consent said: "The Rawson Place stop will be a busy centre for transfers between light and heavy rail and buses during construction and operation. The EIS acknowledges the issues for pedestrian access at this stop location, and proposes mitigation measures to reduce pedestrian wait times at key intersections..." The EIS did nothing of the sort. The indicative plan did not show a right-hand bus-only turn into Rawson Place and the plans included by Booz & Company contradicting this were incomprehensible as pointed out in a previous post "Secrets of the coven". The deliberate contradictions were not dealt with in the Preferred Infrastructure Report. Planning & Environment are fabricating things that were not exhibited and cannot be disputed in an assessment.

It is not just bus passengers that are being callously crippled by the North Shore government. The deterioration in the "Level of Service" from the do-nothing projections, caused by the trams to the crucial intersection at Pitt Street and Druitt Street is off the scale. TfNSW concedes that this is due to the bus-only right-hand turn from Pitt Street to Rawson Place. Trams running on empty along George Street after discharging passengers at Central would be an even greater cause of gridlock here but TfNSW will not acknowledge this. The gridlock here is demonstrated every year during the Chinese New Year parade. The modelling used for the LoS data is infantile but confirms the predictions from the vehicles per hour data last published in 2005. There will be intractable congestion at this intersection throughout the day every week day.

Eddy Avenue has been the sine qua non arterial between the Eastern Suburbs and the rest of Sydney south of the Harbour since the building of the Country Steam Station in the first years of the 20th Century. Traffic using this arterial has currently negligible impact on bus services entering the CBD. Traffic flows will be crippled seven days a week for the rest of the life of the City.

Every bus service that enters the CBD from Parramatta Road or City Road will have to pass through the congestion whether they are forcibly terminated in Pitt Street or Coogee Beach or terminated at Circular Quay - every public bus service to the CBD from south of the Harbour will be crippled by a privately-owned tram company given a monopoly on access to George Street. The more buses that are forcibly terminated at Pitt Street and forced to make a right turn into Rawson Place the greater the deterioration of the intersection according to the modelling of TfNSW - the crippling of traffic flows and bus services gets progressively worse for the rest of the life of the City.

And for what? Buses terminated in Pitt Street have to travel north to Campbell Street or Goulburn Street to physically turn round according to the conflicting accounts in the EIS. There are alternatives that were not considered that do not cause the same deterioration in traffic flows and do not expose bus passengers to the unacceptable risk of being terminated permanently. Buses could turn left at Campbell Street - there is sufficient road width in George Street south of Campbell Street for a bus lane to Rawson Place, as you can see in the plan of the Chinatown stop.

Buses could turn right into Park Street then back via Castlereagh Street. This would mean that passengers heading to and from destinations along New South Head Road would not be forced to transfer to tram or train to travel two stops to Park Street. This would cut unto the profits of the tram operators - unthinkable. This can be reversed by a state government not obsessed with destroying the efficacy of public transport.

There is a far better alternative that I outlined in my letter to the Minister in April 2013 and reiterated in my Submission to the EIS. The submission was received and read, as issues raised were listed in matters to be dealt with in the Submissions Report but Planning and Infrastructure did not deign to assess any of the matters that I raised in my Submission. I will outline the route yet again in this blog in another post. Voters at the election on March 28th need to be aware that there is an alternative to selling off the electricity wires and poles to building a $10 billion plus rail tunnel that only has connections with the CBD south of Bathurst Street, God knows where, and Central Station.

Another thought bubble from the fish out of water

Baird has said there could be an underwater metro station at Barangaroo. Since the proposed rail tunnel has not been designed or costed or been subjected to a feasibility study he can promise anything he likes.

You think New South Wales politics could not get any more bizarre but it does.
Posted by Unknown at 18:24