Buses from Parramatta Road and City Road have to travel north at least to Campbell Street in order to physically turn around. It does not make any sense then for trams to access the CBD south of here. Running coupled 90 metre long trams through the three major pedestrian crossings from Central Station and blindsiding pedestrians would not be acceptable anywhere in the civilised world. It is also completely unnecessary. If trams from the southeast enter the City to the north, the Randle Street loop that worked impeccably during the Olympics and at events ever since remains virgo intacta. The trams are an additional resource for clearing the crowds. It is Baird's obsession with crippling the Public Transport system and forcing people onto privately-operated transport that is the sole motivation for this disastrously misconceived tramway.
I outlined how trams from the southeastern suburbs would connect to the Pitt/Castlereagh Streets tram loop in my letter to the Minister more than a month before Hazzard declared the undeveloped Project to be critical Significant State Infrastructure. The tram rails are side by side in the lower part of Campbell Street west of Hunt Street and occupy the redundant left-turn lane in Campbell Street and then some to the east of Hunt Street. Outbound buses would access Crown Street by travelling straight up Goulburn Street which is now one way all the way, east of College Street. The tram tracks in Campbell Street do not obey the drive on the right rules which is of no matter since the tracks are isolated from pedestrians for most of the route and would have an appropriate speed limit for this limited distance.

Inbound tram services
Campbell Street westbound west of Elizabeth Street is just a rat-run for vehicles that choose not to use Eddy Avenue or Hunt Street to reach Pitt Street or George Street. It would be closed to vehicular traffic other than trams east of Pitt Street and buses to the west. 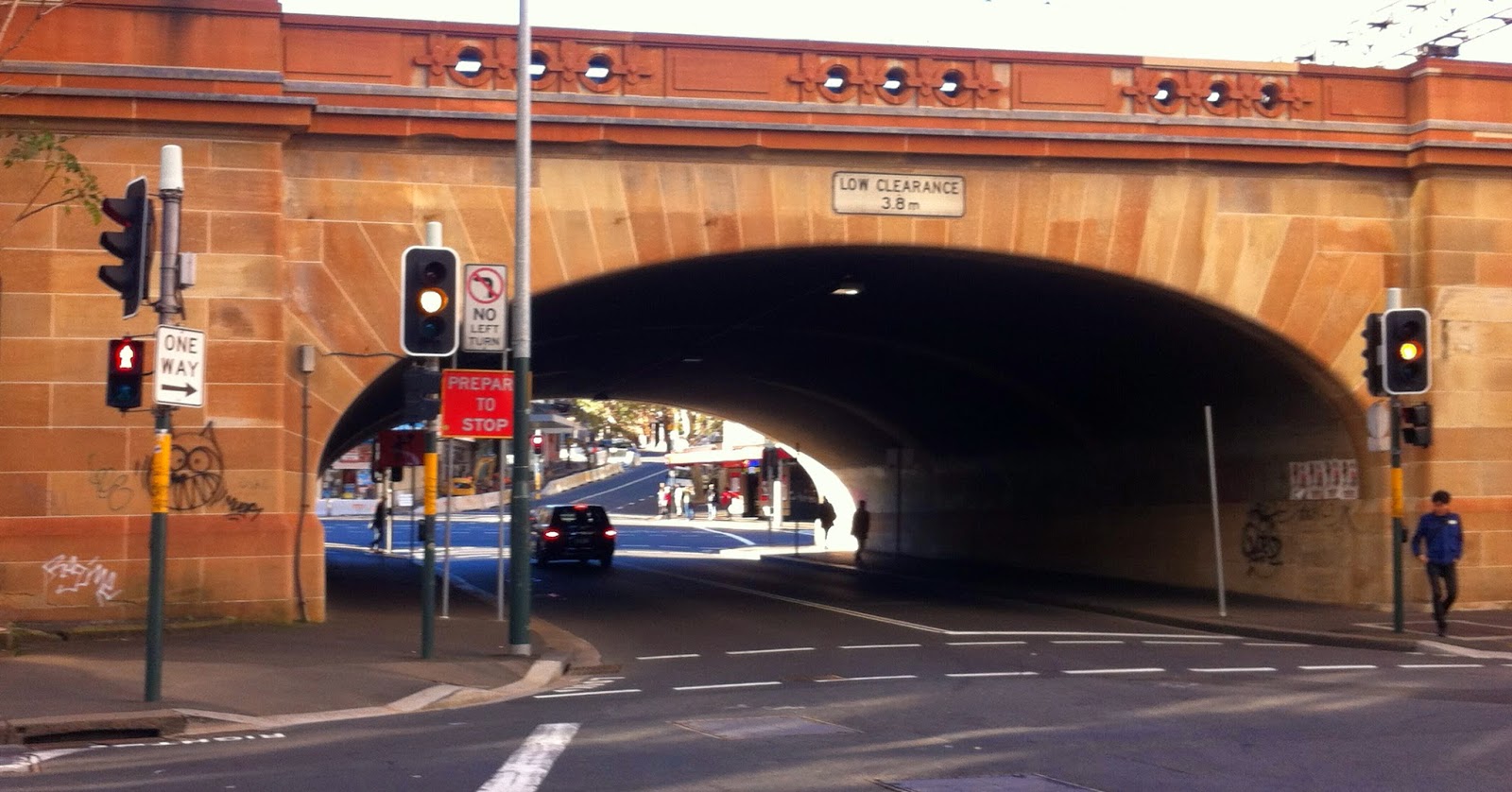 There would be separate tram services from the southeastern suburbs to Central and Railway Square and to the northern CBD, as has been the case from the foundation of European settlement in Sydney. The width of the roads in the northern CBD was predicated on this policy.

Because the rails do not obey the keep to the right rule there would be inbound stops at Taylor Square and say Harmony Park. There would be no right turn from Campbell Street into Elizabeth Street just a left turn. Vehicles including buses would use Hunt Street to make this turn - there are no destinations between Campbell and Goulburn Streets.

In a previous post "Managing congestion with the Oyster (aka Opal) Card" I outlined how the Opal Card can mitigate congestion in George Street bus lanes north of Market Street in the few hours of a week day when this is a problem. This is the case even if there are no tram tracks to the north of the CBD. With the Pitt/Castlereagh Streets tram loop restored there is a fourth terminus in the CBD for Parramatta Road and City Road bus services. Buses can terminate at Campbell Street, making a left turn from Pitt Street. Passengers can transfer to Loop, southeastern Suburbs and Lilyfield Line trams by crossing Campbell Street to a stop in Pitt Street. Buses terminating here cross the Lilyfield rails coming and going but they do not cross tram tracks a mind-numbing five times while running on empty after dumping their passengers in Pitt Street, as proposed by TfNSW. This terminus does not offer opportunities for buses to lay over and would mainly be used during the AM peak. The cost on the Opal Card would be the same as for a service to Randle Street. With the Opal Card commuters can change to a service to the appropriate destination at any stop in Parramatta Road or King Street as pointed out in the previous post.

Most tram services from the Lilyfield Line would continue to the north of the CBD but there would be the usual choice of destinations to Central Station. Off-peak services would stop at Central on the way north.

The Loop tram services add additional capacity to transport services to the CBD and do not degrade any existing bus service. They make Sydney CBD transport future-proof.

Outbound tram services
The outbound tram rails are through the "Golf House" building and the building behind it as outlined in my letter to the Minister and submission to the EIS. There would be a stop here then the next stop would be at Bourke Street. The trams would enter Foster Street at a higher level and Foster Street would be closed to traffic between here and Campbell Street. The air rights above this stop could be flogged off at a later date.
The trams services to the southeastern suburbs would be on a demand basis and would be additional to existing bus services to Elizabeth Street and Central and Railway Square which are largely unaffected. Bus services to Railway Square to not contribute to congestion in bus routes to the northern CBD which was falsely advanced as the raison d'être for tram rails in George Street.

The tram services from the southeastern suburbs to the northern CBD would actually be faster than existing Elizabeth Street bus services even without priority signalling, being a more direct route with less queuing at intersections. Tram movements would be in parallel with bus movements and vehicular movements and controlled by the SCATS system.

The northern lanes of Campbell Street are currently being butchered for a one-way bicycle path. So there is a binary choice: you can have an efficient and safe tram service to the CBD from the southeastern suburbs or yet another plot for cultivating inner-city pansies.

The main reason for the Pitt/Castlereagh Street tram Loop is to reduce localised congestion on the City Circle trains, something the George Street tram alignment conspicuously fails to achieve - it does absolutely nothing to reduce this congestion. It has been demonstrated that a competently designed tram system for the southeastern suburbs can compete successfully with bus services without crippling them with deliberately generated congestion in crucial traffic arteries or forced termination of services.

I will discuss the Flinders Street end in another post.