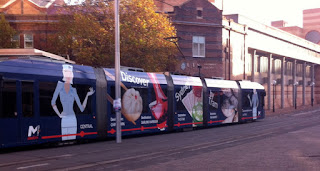 The Randwick trams will be 45 metres long, fifty percent longer than the existing trams shown at left. There is no other place in the world that runs light rail carriages of this length through city streets, let alone through shared pedestrian/cyclist areas or past children's playing fields.

It is intended that the trams will be privately operated and so will be under the same profit motives as the existing trams and the monorail before they were taken over by the NSW government.


Advertisers have figured out how to cover the windows with advertisements that are opaque from the outside and semi-transparent from the inside, and trams and the monorail carriages make extensive use of these advertisements. This hardly matters because they do not run though shared spaces for any length of their route. Public buses are more responsible with these kinds of billboard advertisements.

Buses pull into the curb to discharge passengers so a child who alights from a bus has to pass in front of the bus to be hit by an unseen vehicle traveling in the same direction. The driver, who has a rear-vision mirror, can toot his horn as a warning. Children are also instructed on what not to do.

With the Oyster Card (I refuse to rebadge it as the Opal Card) passengers can enter and leave trams and buses by any door. Someone passing behind a 45 metre tram with opaque windows would not get any warning and would not see or hear much before being hit by a tram passing through in the opposite direction. Tram stops with pedestrian islands on both sides and with rails set in the road encourage pedestrians to make these crossings.

Trams have low friction between the small steel wheels and the steel rails, which is why they cannot travel down inclines greater than 7%, and they take a long distance to stop. The distance taken depends on the mass of the carriage of course. Clover Moore wants to weigh the carriages down even more with batteries to operate without overhead wires in the CB. God help us.
Posted by Unknown at 00:49