The confidential Cabinet document CBD Rail Capacity Program was subtitled Rail Futures Investigations - Engineering & Construction. It is only of interest for the insights it gives into the level of incompetence that prevails in Departments headed by Rod Staples and into the contempt Ms Berejiklian must have for the intelligence of her North Shore Cabinet colleagues.

The report was set up for Rail Future B, the rebadged CBD Relief Line, to fail and to promote Rail Future C, a Harbour rail tunnel feeding into the two western rail tracks of the Erskineville link. The diagrams for stages 1 and 2 showing the trademark claims of trains per hour during the AM peak on the tracks show an interconnection between a metro platform to the elevated City Circle platforms at Circular Quay. God only knows how this would be engineered or constructed.

The overwhelming advantage of the Kent Street alignment over the Harbour tunnel options is that the rail tunnels do not have to pass under the Eastern Suburbs rail tunnel or indeed the Bradfield loop tunnels. The tunnel would run roughly parallel to the Eastern Suburbs rail tunnel under the shallow basements of the Capitol Theatre to the Kent Street alignment then it is plain sailing to Wynyard. The self-described scoping study does not acknowledge this. The Risk Factors listed in an appendix admit that with the Harbour tunnel there will be "deep stations within the CBD and North of the Harbour (lift access only), however, there is an opportunity to reduce the depth with the use of single deck rolling stock". Yeah, sure. The station between Wynyard and Central on the CBD relief line would presumably be between Bathurst and Liverpool Street to give the requested better access to World Square, but the report insists that it too would require lifts only. It would be physically impossible for the CBD Relief rail tunnel to pass over the top of the Bathurst Street Cross City Tunnel and be so deep as to require lifts only.

Rail Future A is not developed in the report. Did someone point out it would be physically impossible for a rail tunnel to pass under the Eastern Suburbs rail tunnel at Pitt Street, feed into a platform deep under Central Station and make it up to the Airport Line tunnel entrance north of Cleveland Street, over the said tunnel? This leaves but two Rail Futures B and C. Both require a rail tunnel from Eveleigh, under Redfern Station to a platform under platforms of the Central Terminal. The difference between the options is the depth of the platforms under Central.


The rail tunnels of Redfern 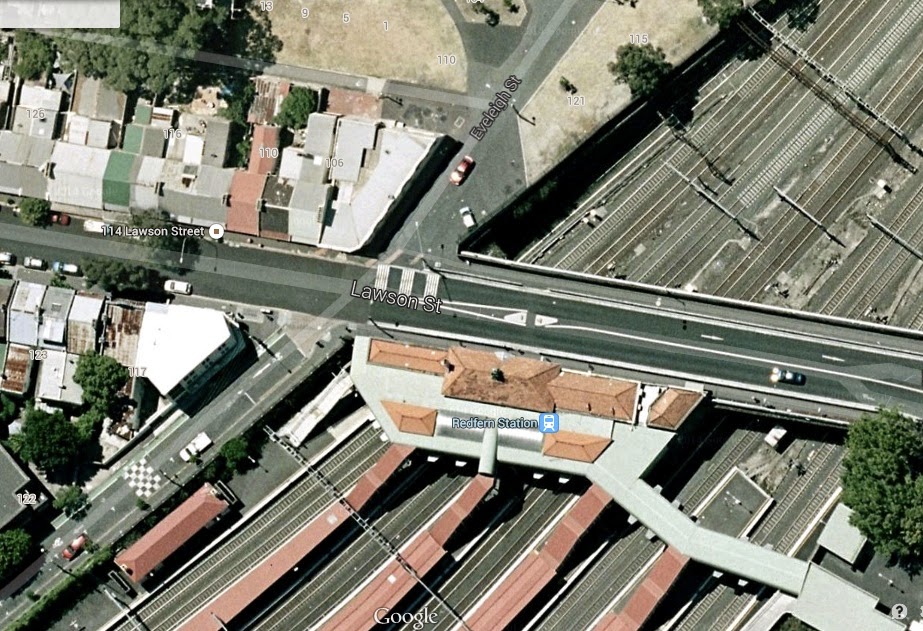 There are a number of unused or little used tunnels under Redfern Station. There were partially-built platforms above the Eastern Suburbs line platforms with stub tunnels extending to Lawson Street, intended for a line to Maroubra. The much earlier tunnels provided grade separation for the Illawarra line trains to access the Central Terminal and the wharves of Darling Harbour and Pyrmont Bay which was the main commercial harbour until the development of the container wharves at the Hungry Mile. The Illawarra line was commissioned in 1882 so the Illawarra Junction is an old structure. There is an additional single-rail tunnel under Platform 1 connecting to the Eveleigh train yards which pops up just north of the Lawson Street bridge (it was in shadow when the Google satellite went overhead) - the rectangular brick structures on Platform 1 are chimney stacks for the steam trains. The main tunnels pop up to the west of Redfern Station and trains proceed to Central Terminus past Platforms 1 and 2 at Redfern station, generally without stopping.

In Plan C, dubbed Growth option, a Harbour tunnel would connect to the two western lines through Erskineville station. This puts the Illawarra Junction tunnels in the path of the Harbour rail tunnel. The plan announced by Baird without any disclosure (Plan F? Rail Future D was a metro that did not take over existing double-deck lines, which was not covered in the report) resolves this dilemma by extending the Harbour rail tunnel deep under the Erskineville line to Sydenham. This tunnel extension is three quarters the length of the Airport line which went into receivership. When you are selling taxpayer assets cost is no object.

A government that was capable of rational thought and was not obsessed with eliminating the jobs of train drivers at any cost would have concluded that the Harbour rail tunnel was not economically viable or would have examined this with a feasibility study. North Shore politicians do not carry out feasibility studies or triumphantly announce they will disregard the feasibility studies that are commissioned. The document sent to Cabinet by Ms Berejiklian was self-described as a "scoping study". Rob Sitch described the difference in the excellent ABC comedy Utopia: "A scoping study is like a feasibility study but with pictures". The pictures in this scoping study were London Underground style diagrams of the rail network with infantile assertions about trains per hour superimposed. No consideration was attempted to the actual numbers of passengers that would be expected to alight from stops based on floor-space ratios in the surrounding areas.

Here we will show how the CBD relief line would connect with the main line to Central Terminal. You will recall that a Harbour rail tunnel was physically incapable of connecting to the Airport line and had to continue to Sydenham junction to connect to the Bankstown line. With the CBD Relief Line the northbound rails would pass under Platforms 1 of Redfern Station leaving the historic Illawarra junction intact. The rails would split to surface again to the north of the Cleveland Street road bridge to give access to the above ground platforms of Central Terminal and to continue slightly deeper to the underground platforms. The southbound rail would surface north of Cleveland Street. Depending on the actual demand for passengers to access the areas around Wynyard and Barangaroo the platforms under Central Terminal could ultimately be connected to platforms adjacent to Wynyard station. Problem solved.