The whole of Government

The Independent Review Traffic and Transport Assessment damning general comments were quoted in a previous post: "There appears to be significant work remaining to enable a full understanding and meaningful assessment of the Project's environmental impacts to be undertaken". The response of TfNSW was "implementation of the CSELR project will require whole of government collaboration". Samsa Consulting were not given any resources to independently assess the contradictory assertions in the EIS and PIR and their report was not released until the newly appointed minister for Planning and whatever else had signed off on the project.

In their response to the Independent Review TfNSW conceded that most government Departments would need to be subverted in order for the project to proceed but the key Department was the Department of Planning. The Minister Pru Goward confirmed that this Department had indeed been subverted when she approved the project as the Review was released.

The current inquiry at the ICAC has revealed that North Shore and Central Coast politicians were colluding to replace heads of Departments who might advise against plans to privatise public utilities before they were in office. The astonishing thing about the childish attempts of Liberal Party apparatchiks to force the resignation of the CEO of Sydney Water was the extent to which high-ranking members of the Party were involved. These activities were corrupt behaviour under the Act in the opinion of the former commissioner of ICAC David Ipp interviewed in the Four Corners program "Democracy for Sale". 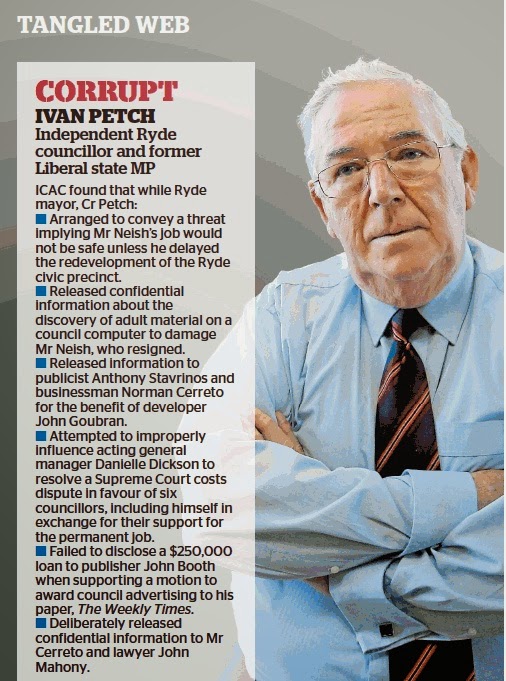 Once they were in office there was no need to engage in corrupt practices to replace senior public servants. Public servants at the head of government departments could be replaced by amalgamating ministries and renaming public corporations. The one exception was the Treasury which has been a stand alone ministry under the Westminster system for centuries. Shortly after the election, O'Farrell forced the resignation of the Head of Treasury by making allegations which were subsequently shown to be untrue. Baird, the newly appointed Treasurer, got to appoint his own department heads. The newly appointed staff at Treasury went on the produce their first Budget with errors of more than $3 billion.

The Kingpin from Manly

The undisclosed plans of the North Shore rump to privatise the state's Water Distribution network that were in place before the 2011 election, have been exposed in the latest ICAC inquiry and have been abandoned following the resignation of O'Farrell, but the activities of Sydney Water Holdings was just a sideshow. The main game was always privatisation of the electricity distribution network. Insiders were staking out positions to take advantage,  before the election.

Roger Massy-Green gave $10,000 to Baird's election campaign from two separate companies at the same time, so he was aware that the donations were not legal. Baird did not declare any donations. Shortly after the election the Treasurer personally awarded him a $150,000 consulting contract at Treasury and he was appointed chairman of Networks NSW, the corporation that took over the poles and wires, for $200,000 a year. Not a bad return.

Privatising the poles and wires

That Baird should press ahead with the announcement that if he wins his first election he will consider he has a mandate to sell off half the city power distribution network demonstrates the contempt North Shore politicians have for the intelligence of people living south of the Harbour. After being in power for three years the government has not done any work to establish a justification for turning a public utility into a private monopoly. A Metro tunnel under the deepest part of Sydney Harbour has not been designed, has not been costed or shown to be physically possible, has not been subject to cost/benefit studies or feasibility studies and can be shown to be unnecessary. A road tunnel from Glebe island to the misconceived WestConnex road tunnel is a desperate attempt to cover up the obvious flaws referred to in a previous post, and has not been designed or costed. It will encourage motorists from the North Shore to overload the Glebe Island bridge which can not have its capacity increased.

The Baird government is the most incompetent government in the history of Australia and is flouncing from one disaster to the next.

Laughing all the way back to the jungle 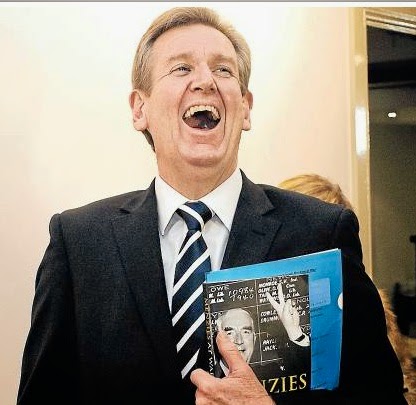 Clover Moore boasted to the Press Club that the Sydney Council had done the work on the George Street tram alignment and had passed it off to the Liberal Party government. Her address was the usual relentless stringing together of mindless assertions with references to international experts. In the internet age you can find experts to tell you any thing you want to hear.

O'Farrell and Baird saw the tramway as a project to gratify their ambitions to be seen as infrastructure guys. There was never any attempt to establish the long term transport needs of the CBD.

Now O'Farrell will never receive a Premier's pension after a career where he has never been anything but a politician. Maybe there is a God of retributive justice after all.

The privatisation of the electricity distribution networks is the most radical policy taken to an election but there has been no disclosure of the projects it is supposed to pay for, apart from infantile computer-generated simulations of single-deck trains passing in separate tunnels in the bed rock under a stylised cross-section of the Harbour. It is hard to believe politics in NSW could have been reduced to this.

The tram alignment in the CBD is the key to establishing that a Metro tunnel under Sydney Harbour will never be necessary or financially viable so we will press ahead with however little information is available.