One lane is insane 2

The indicative plan of the Randwick terminus in the EIS was rotated and cropped to conceal the layout of southbound lanes in Belmore Road adjacent to the Highcross Park tram terminus. It clearly showed a northbound general traffic lane alongside a bus stop lane. It showed trams entering and leaving the terminus on different rails despite there being points for switching between rails in front of the Oncology Department at Prince of Wales Hospital. Parsons Brinckerhoff are implying that trams will be arriving alternately at each platform.

In the Technical Papers 5.4.5.4, Booz & Company gave a completely different description of the terminus. The northbound lane was designated as bus only and the southbound lane was not defined further but was required to provide access to properties. The most startling difference however was the tram stop, which was island platform.

The switch points for changing rails are closer to the intersection and the outbound and inbound points are more widely separated, and it is made clear that only one of the rails into the park would be in use at any one time. Which of the rails that would be in use would depend on the time of day, the northern rail would be in use for the "AM peak" and the southern rail at the "PM peak" and it would be anyone's guess which rail was in use throughout the rest of the day and night.

When the Randwick stop was just a dot on an indistinct map, posts on this blog speculated on whether buses would go with the flow of the Cuthill Street sling-shot or go against the flow, with dire consequences. Booz & Company reveal that TfNSW intend to do both, whatever the consequences for traffic flow in the Randwick traffic arteries. Incredibly, they would have you believe that buses would use the alignments of the unused rail to make turns into and out of High Street. Buses of course have to make return journeys throughout the day.

Needless to say Randwick Council in its submission stated its opposition to the terminus in High Cross Park: "The Council is opposed to the High Cross Park design as detailed within the EIS... Council supports ongoing discussions to progress detailed study and modelling of the relocation of the Randwick interchange from High Cross Park to the eastern end of High Street opposite Prince of Wales Hospital".

The response of TfNSW has been to reissue a somewhat less cropped version of the plan in the EIS. The northbound lane in  Belmore Road is now depicted as bus only and bizarrely the trams in High Road and the terminus have switched rails. Parsons Brinckerhoff still insist the trams will arrive at alternate platforms, still contradicting Booz & Company.

The less-cropped plan reveals for the first time that there will be a single lane for southbound traffic in Belmore Road to carry all the traffic from High Street, the section of Belmore Road through the retail/civic heart of Randwick, and Avoca Street headed to Coogee Bay Road and Perouse Road. This single lane ends as a right-hand turn into Perouse Road so a vehicle waiting to turn right across the busy arterial Coogee Bay Road will block traffic from entering Coogee Bay Road.

This is the same situation that TfNSW is creating in the single lane in Devonshire Street, which ends in a right-turn into Crown Street, but Devonshire Street is just a local distributor for Surry Hills traffic. Belmore Road has been the sine qua non arterial road from Eastern Australia north of Kirribilli, to Coogee and south Maroubra from the foundation of the colony.

I railed against the cropping of the plans and the lack of information on Belmore Road in the EIS in posts on this blog but I did not lodge an objection in my submission. In my deluded state I believed that legally you could only object the matters that are disclosed in the EIS. I thought that if I raised objections on the basis of deductions TfNSW could claim they were not obliged to make the data available since it could be deduced.

Apparently the O'Farrell government has obtained advice from the Attorney General's Department that it is legal to make disclosures in a revised EIS months after the close of the exhibition period. Is there no section of the Public Service that has not been subverted by O'Farrell in less than three years? 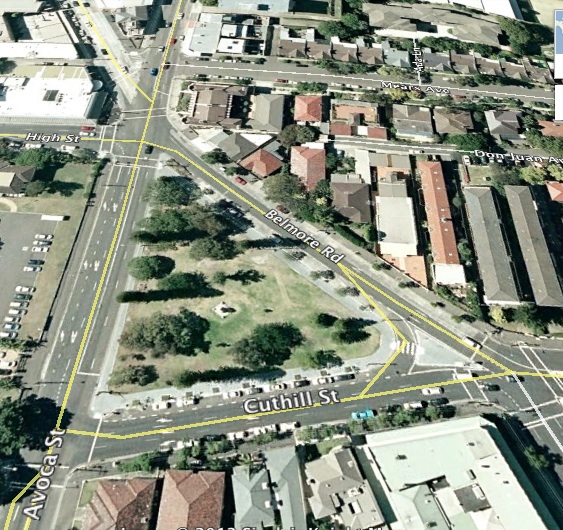 There has never been a right-hand turn from High Street into Avoca Street, since High Street is two lanes each way. Traffic needing to access Avoca Street is slingshotted from a right turn lane into Cuthill Street at the southern end of High Cross Park. Right turns for general traffic will still be banned so vehicles will be forced to turn into Perouse Road instead. Buses however will be forced to make right-hand turns into Avoca Street. A single bus waiting to turn right will block traffic in High Street from proceeding through the intersection in parallel with the trams - the same old story as in Devonshire Street at Crown Street. But TfNSW acknowledges that High Street is a major arterial. Traffic travelling along High Street to Coogee Bay Road will have to pass through two single lane roads that are inexorably blocked by vehicles making right-hand turns at the ends.


The bus route of death

The exhibited EIS revealed that TfNSW will be terminating some of the Parramatta Road bus services displaced from George Street at Coogee beach via High Street. The revised EIS demands that the assessors just approve the project and allow O'Farrell to tell bus passengers from the inner west where they will be going two or three years after the next state election. Whenever they are informed, Booz & Company has plotted their path through the Randwick terminus.

Parramatta Road bus services terminating at Coogee beach will be forced to cross the tram rails four times, the fourth time is the deadliest. The diagram above of the PM peak shows the buses making an almost 90 degree turn into Avoca Street across the rail active in the morning, according to Booz & Company, or alternately throughout the day, according to Parsons Brinckerhoff. In the words of Vice President Joe Bilden: "not physically possible". It is not physically possible for buses to turn here without "encroaching on the light rail alignment". Not only are bus drivers sitting ducks so are passengers seated in the seats you are asked to vacate for mothers with babies and people with mobility disabilities, who are not able to see cattle cars approaching in the rear-vision mirror. They are in the firing line for cattle cars entering and leaving the High Cross Park terminus.

They are not out of the firing line when the other rail is active. I will refer you to another blog: melbournetramdriver.blogspot.com.au  His second post, in July 2011 "No steering wheel" is relevant to the matter. The google streetview figures below are from this post. 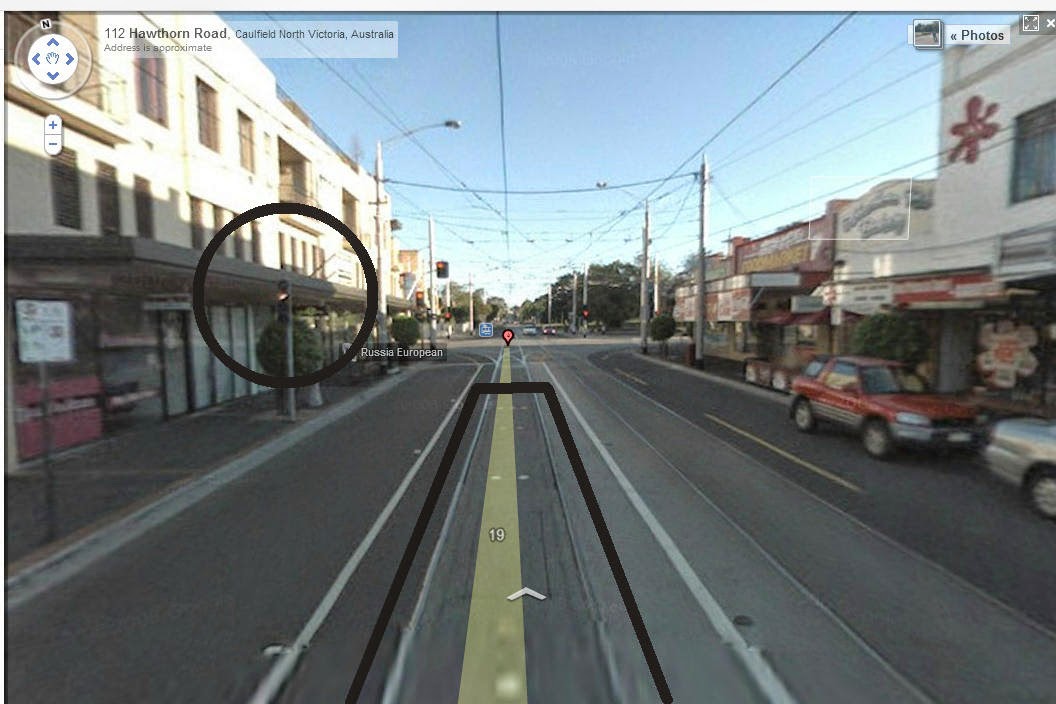 Melbourne tram drivers have shoulder-high "tuna-can levers" for switching between rails but the more heavily used points are of course automated. The driver indicates the direction he wants to go between the first dot and the second pair of dots. The default position is straight ahead. In a tram system the points are vulnerable to vandalism and general failures from weather. In the event of failure of the switch between rails the trams would go straight ahead and take out buses that assumed the other rail was in use - no passenger would be spared.

There are of course no parts of the Melbourne tram system where trams are forced to switch between rails, as close together as physically possible, just before a very busy intersection when travelling at the speed limit of 60 kph, we are told. Trams will be travelling in each direction over the single rail into the Randwick terminus every two minutes as there are only two terminuses in the system. Only New South Wales produces politicians insane enough to contemplate such a system.